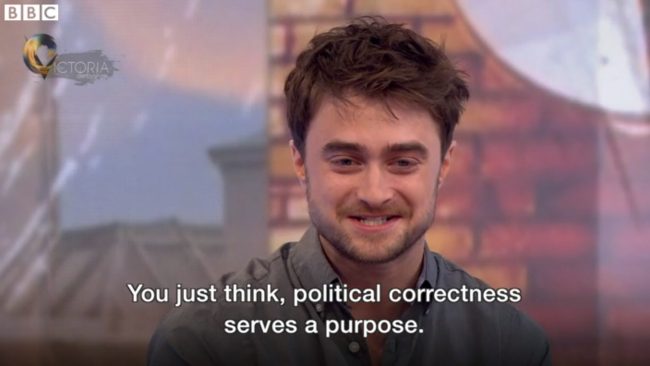 It’s both a good thing and extremely embarrassing that Hollywood actors from other countries are not only keenly aware of the inherent discrimination in the film and television industries, but that they’re talking about it when they go do press in their home countries. Daniel Radcliffe was recently on a talk show in the UK where he spoke about discrimination in Hollywood, as well as discrimination within his own political party.

In an interview with BBC’s Victoria Derbyshire, Radcliffe was asked if Hollywood was racist, or is racist, to which he replied, “I mean, yes. It’s pretty undeniable. That’s the thing. We like to think of ourselves as being a very, very progressive industry, but we have been lagging behind in all kinds of areas that have been well documented.”

I have to say, I admired how bluntly the question was asked, as I believe that American television wouldn’t so nonchalantly use the word “racist” when phrases like “diversity problem” are far less threatening and “abrasive.”

Radcliffe also spoke to the fear that many gay actors still have about coming out. Not because they fear they won’t get work at all, but that the work offered them will be limited. “I suppose then people just want to cast you as gay,” he said.

Moving from Hollywood racism to discrimination in politics, Derbyshire asked him about anti-Semitism in the UK’s liberal Labour party. Radcliffe, who is a supporter of the party and identifies as Jewish (his mother is Jewish) said, “I find that so shocking from the Labour party especially. I don’t know why especially, and I don’t know why I’m especially shocked. I always feel like, I don’t know, whenever something like anti-Semitism comes up, I’m always just like … I’m amazed any of it still exists, but that particularly? That’s just mind-blowing.”

As far as American politics—in which he has some interest, being that he owns a home in the U.S.—he’s shocked that Trump has gotten as much support as he has. “It’s fascinating and terrifying,” he says. “And there’s part of me that just kind of can’t believe that this unbelievably wealthy, privileged man has somehow managed to convince people that he’s not part of the elite, and that he’s a man of the people. And the argument that a vote against him is a vote against political correctness. And you just think, political correctness serves a purpose.”

Trust me, Daniel, there are plenty of U.S. citizens who can’t believe this has happened either. Here’s hoping that there are enough of us, both in the political sphere and in entertainment, to be able to work toward eliminating racism and discrimination from both of these spheres.

(via BBC, image via screencap)