Tens across the board. 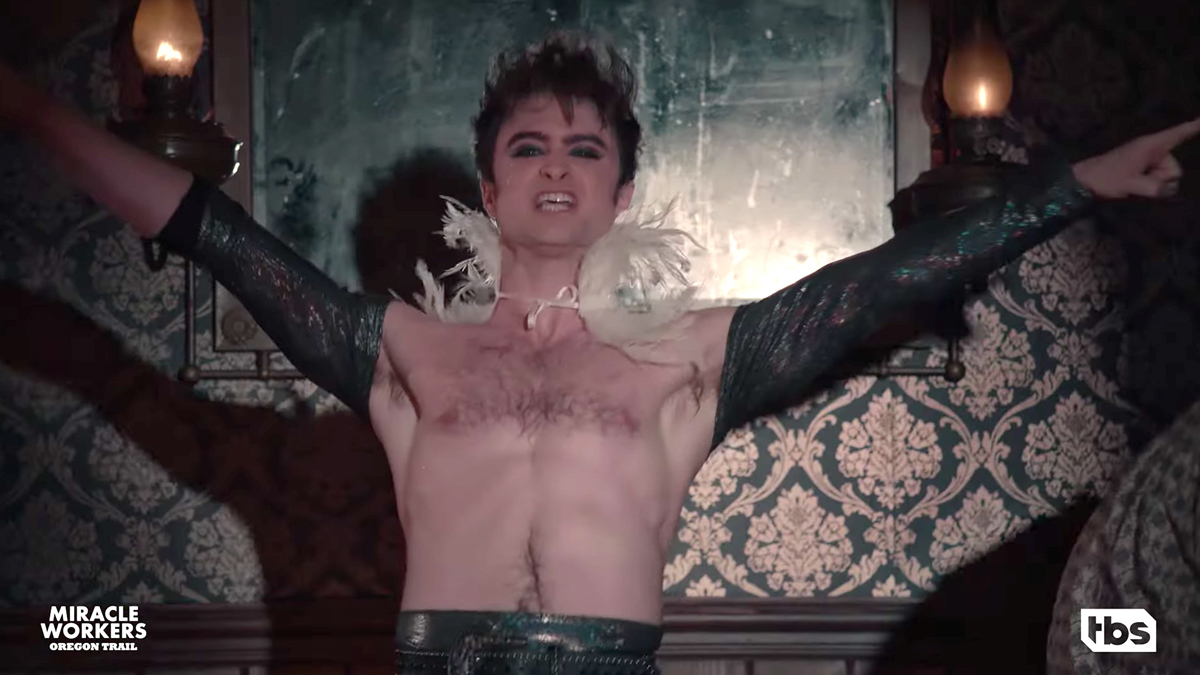 The most recent episode of Miracle Workers features Daniel Radcliffe singing “She’ll Be Coming ‘Round the Mountain” in his most dramatic costume yet: black, sparkling assless chaps and a feathered collar.

Needless to say, we are here for it.

I’ve said for YEARS than Daniel Radcliffe has incredible comedic timing and he was being WASTED in dramas. https://t.co/uQxuCxYb4O

oh i wonder why daniel radcliffe is trendi- pic.twitter.com/54ts1Q6Fcr

I didn’t have Daniel Radcliffe as a priest doing a a gloriously high camp drag performance circa 1840s Oregon on my 2021 bingo card, but here we are I guess

Native show writer Kelly D’Angelo cites Rocky Horror Picture show as a source of inspiration. Pitched and scripted by D’Angelo, Taylor Cox wrote the episode out with the rest of their team.

some people fight wildfires. some people teach children. I put Daniel Radcliffe in a rocky-horror-esque feverdream musical number with assless chaps. 🍑 We all have our part. #MiracleWorkers https://t.co/R5bsefy1aF

Even the mixed reactions had to appreciate the makeup (Brigette Hennech) and costume work (Christina Mongini.)

that is definitely an effect someone would wear for butch queen vogue fem tho.

Created from the Black and brown NYC ballroom scenes of the ’60s, voguing became recognized in popular culture when used in Madonna’s chart-hit “Vogue.” Documentaries like Burning in Paris and Disclosure, reality TV shows like Ru Paul’s Drag Race, and Emmy Award-nominated shows like POSE have all given better context to where the house dance originated.

Showrunner Daniel Mirk and Robert Padnick told Entertainment Weekly that Radcliffe was excited as soon as it was pitched to him.

“He developed the dance with a choreographer and practiced it extensively on his own time, and obviously his hard work paid off because the routine is amazing.”

Add this routine to the list of reasons to love Daniel Radcliffe. This goes right under not having any of Harry Potter creator J.K. Rowling’s TERF BS.

Tens across the board.