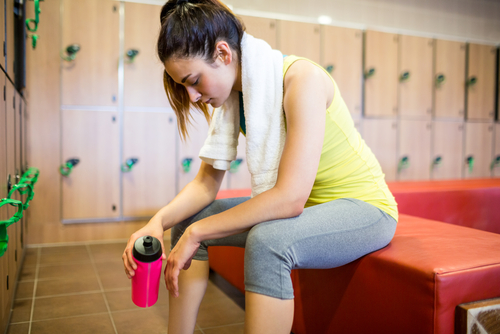 Earlier this Fall, we heard the horrible story of a Playboy Playmate named Dani Mathers who, when in the locker room of an L.A. Fitness gym felt it necessary to take a body-shaming photo of an unsuspecting older woman then post it to Snapchat to make fun of her. Now, Mathers has been formally charged.

As reported by BBC News, Mathers has officially been charged with “invasion of privacy,” which carries with it a sentence of up to six months in jail and a $1,000 fine. That might seem harsh for a “mean” Snapchat, but let’s not forget exactly what happened: She surreptitiously took a photo of a naked woman she didn’t know without her consent and posted it on social media for all the world to see. Yeah.

However her lawyer, Thomas Mesereau, doesn’t seem to know what words mean. When news of Mathers’ actions first came out, Mesereau insisted to the Los Angeles Times that his client did nothing wrong, “neither invading anyone’s privacy nor violating any laws.” Um…since when is taking a nude photo of someone without their knowledge not invading anyone’s privacy?

The L.A. City Attorney Mike Feuer, who brought the charges, seems to understand what words mean a little better and also seems to see this case as a way to fight body-shaming, calling it “humiliating, with often painful, long-term consequences. It mocks and stigmatises its victims, tearing down self-respect and perpetuating the harmful idea that our unique physical appearances should be compared to air-brushed notions of ‘perfect’.”

Mathers has already been banned from L.A. Fitness gyms, and has been suspended from her former job hosting a radio show. Now, it remains to be seen whether she will be convicted of an official “invasion of privacy” charge. More as it develops…