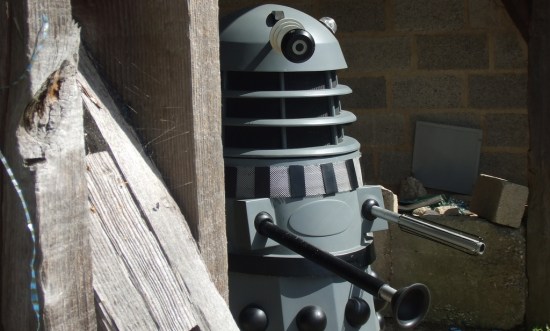 Teachers at the West Exe Learning Centre in St. Thomas, England have a problem.  It’s not that a Dalek has appeared somewhat spontaneously on their campus, threatening all with it’s inevitable waking into full exterminating consciousness.  It’s that no one has come forth to claim it.

“We’d like to return him to his owner if possible because he’s taking up quite a lot of room and is living in a cupboard at the moment.”

If the emotionless space-faring monstrosity cannot be linked with its actual owner, Wiley supposed that “maybe we could give it to some charity or organisation that can do something with him.”  School administrators noted that the alien is big enough to sit in, and a little damaged here and but still certainly worth something to someone (perhaps a few hundred pounds).  No Dalek thefts have been reported in the area.

To branch out to a completely separate bit of British Sci-Fi, perhaps someone could get him a thumb?