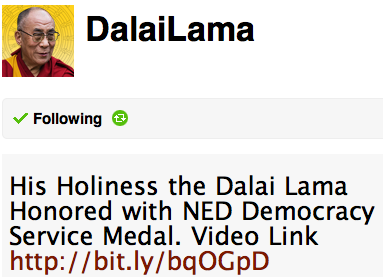 When Twitter co-founder Ev Williams met with the Dalai Lama on Sunday and pitched him on using Twitter, Williams said “he laughed.”

But the joke is on the Twitter naysayers after all, for His Holiness the 14th Dalai Lama has just joined Twitter. And while there was previously a fake Dalai Lama on Twitter, this time, it’s a verified account.

So far, the handful of Tweets made by the Dalai Lama’s account have been media-rich: bit.ly links to the Dalai Lama’s speeches, events, and photos. Also: as a result, we now know what the favored URL shortener is. Eat that, is.gd.

Last night, The Next Web reported that the Dalai Lama had only 354 followers, but our latest count puts him at 56,898. What’ll it be at the end of today? This week?