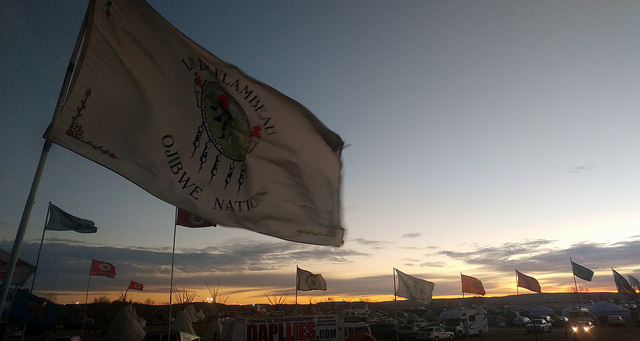 This weekend saw something of a victory for the water protectors of North Dakota as the Department of the Army announced that it would cancel its plans to build the oil-carrying Dakota Access Pipeline through their territory. In a statement, Jo-Ellen Darcy, the Army’s assistant secretary for civil works, wrote, “The best way to complete that work responsibly and expeditiously is to explore alternate routes for the pipeline crossing.” Essentially, this boils down to: the Army has decided to postpone construction as they “explore” alternate routes. In the phrasing of the decision, the door is kind of left open to the fact that such an exploration can prove fruitless or otherwise unsuccessful.

So, given this fact, and given the fact that the current administration is on its way out, the decision to postpone construction might not hold up for long. President-elect Donald Trump has said before that he aims to get the construction underway one way or another. While a lot of the promises Trump has made have proven to be questionable at best in terms of whether he’ll follow through or not, his words here should be enough to instill some kind of worry in anyone with even a passing interest in the fight. Trump was an investor in the company behind the pipeline, and though he’s reportedly sold his stock, one of their executives made sizable donations to his campaign.

Energy Transfer Partners, the company responsible for and behind the construction of the pipeline, issued a statement responding to the decision, writing:

ETP and SXL are fully committed to ensuring that this vital project is brought to completion and fully expect to complete construction of the pipeline without any additional rerouting in and around Lake Oahe. Nothing this Administration has done today changes that in any way.

In other words, the entire situation isn’t exactly a victory for anyone. It’s more of a waiting game at this point, with ETP/SXL settling in until President-elect Trump can come in and back them up and the Standing Rock water protectors waiting until construction crews actually leave—which, you know, requires them still sitting there in blizzard conditions.

While the decision on the part of the Army and the current administration still represents a bit of a landmark, it can very well just be a milestone on the much longer journey of protecting native and First Nation lands. Moreover, Standing Rock is just the latest issue in a long line of injustices that many indigenous people face day in and day out. Calling this a victory and packing up to go home are, ultimately, rash, rushed actions that deny such realities.

I’m not exactly trying to shame or make anyone feel bad here, I’m just doing what I do when such landmarks are reached. I’m trying to remind you that the fight continues on, and now’s not the time to pack it in and go home.