Forget plots against the Crown; this is the true travesty of the movie. 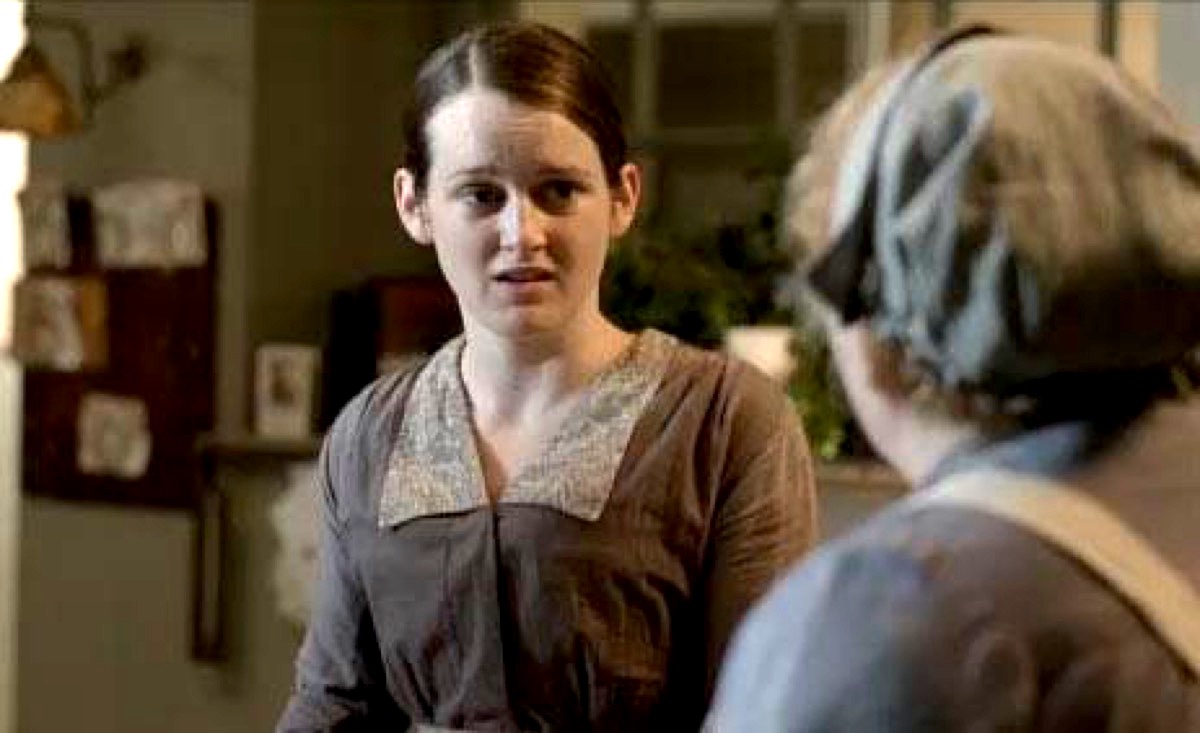 Daisy Mason (née Robinson) of Downton Abbey has been unlucky in love; among her crushes have been a gay man, a boy who fell head over heels for her but then died in World War I, and a series of others that ended up not working out.

But despite or perhaps because of it, Daisy has shown a remarkable amount of character growth over the course of six seasons; she helped her father-in-law with his farm, adopted some rather revolutionary politics, supported Molesley in his teaching career, and has overall grown into her place at Downton Abbey—so much so that attempts at finding her a love interest in later seasons felt counterintuitive to her “working girl with a found family” character.

That’s part of what makes her character arc/romantic subplot in the new movie so frustrating.

When the movie begins, Daisy is secure in her position as the assistant cook of Downton Abbey. She commands the footmen; aims to focus on her work than her wedding; is unafraid to voice her anti-royalist, pro-republican viewpoints (we stan a true republican), even when in front of Carson; and lies for Mrs. Patmore to spare the local grocer’s feelings (a move that later allows the staff of Downton Abbey to prepare dinner and serve their King and Queen in the manner they wish). However, her focus on her work and avoidance of wedding planning irks her fiancé, footman Andrew Parker, even after the notice that they have less than two weeks to prepare for the royal visit.

Later, Daisy is seen ogling a plumber who comes to fix the boiler before the Royal visit. This aggravates Andrew to the point where he destroys the boiler pump the night before the King and Queen are set to arrive. This, of course, only leads to the plumber coming back to fix it again, warning the staff that someone may have wanted to sabotage the royal visit.

Unfortunately, violent, possessive jealousy and toxic masculinity are greater roadblocks to the Royals than assassination plots.

When Andrew later admits his sabotage to Daisy, instead of being concerned by this outburst of violent jealousy over a simple interaction, she thinks it sweet that he was “passionate” and that he shared her anti-royalist sentiments (even when he clearly was only doing it for selfish purposes and not because he agreed with her opinions). This event spurs her to finally start planning for her wedding, which she had been putting off for fear that she did not actually love him.

I could write a whole term paper on all the red flags presented in this plot line alone, but I will keep it brief.

Similar to Riley Finn justifying his jealous violence to Buffy Summers as “being so in love with her that he can’t see straight,” we are meant to root for this couple rather than being put off by the disconnect and potential danger; instead of condemning jealous violence (against inanimate objects or otherwise), Downton Abbey romanticizes it as “passion,” which opens a whole can of worms regarding proper communication and what love and jealousy entail in a relationship.

Jealousy in a relationship can be healthy, if dealt with in a fair and equal way that facilitates communication on subjects not previously explored by a couple. However, more often than not, jealousy is romanticized as showing how those in a tempestuous (or even not-currently-together) couple “truly love each other” and “can’t stand to see them with someone else.”

Jealousy can be a wakeup call, but it can also be a warning sign.

“Extreme jealousy” is often listed among potentially abusive traits, which can also include “possessiveness, unpredictability, a bad temper, extremely controlling behavior, blaming the victim for anything bad that happens, accusations of the victim flirting with others or having an affair,” and more—all of which Andrew exhibited to varying degrees.

I understand that it was a different time and certain behaviors were more acceptable, but the series and movie have generally preferred to play fast and loose enough with history to have drama and intrigue without making most characters racist, sexist, or homophobic to the point of making them unwatchable. Why should violent jealousy be romanticized in a world where Lady Mary works alongside her father and Mr. Barrow can maintain his position after being outed?

Besides that, Daisy has grown enough that she shouldn’t have to settle for a happy ending that includes a violently jealous husband. Daisy deserves better, as do the viewers.