Trump’s Petty, Sexist Attack on Mika Brzezinski May Be a New Low, But It’s Definitely Not His Bottom 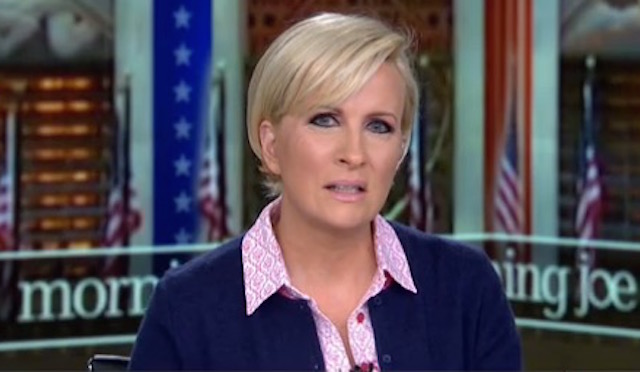 Welp, here we are again. Every time we think Donald Trump can’t possibly get any less presidential, he proves us wrong. We may have thought the low point for the week was his leering at that Irish reporter just trying to do her damn job. But now he’s taken to Twitter to go after the hosts of MSNBC’s Morning Joe, specifically focusing on Mika Brzezinski in a classless, blatantly sexist attack.

She, along with co-host Joe Scarborough have been highly critical of Trump, most recently saying they were left “speechless” over his remarks that he doesn’t want a “poor person” in certain cabinet jobs, and mocking the revelation that he has a fake Time magazine cover hanging in his resorts.

.@morningmika: “Nothing makes a man feel better than making a fake cover of a mag about himself, lying every day and destroying the country” pic.twitter.com/r30Acu5y2P

Early Thursday morning, Trump tweeted his completely unnecessary response to their show (with an inexplicable six-minute gap between the two tweets).

…to Mar-a-Lago 3 nights in a row around New Year’s Eve, and insisted on joining me. She was bleeding badly from a face-lift. I said no!

This is Trump’s standard 4-point attack:

It doesn’t matter that none of these points is likely true. To start, Morning Joe is enjoying its highest ratings ever. As Scarborough said on their show just yesterday, “Donald Trump is only making the media stronger. We have record ratings for us at Morning Joe … subscription increases at the New York Times, Washington Post … Everyone is actually getting more viewers by holding them accountable.” That can’t make Trump very happy, can it?

Also, does anyone believe Mika Brzezinski attended a New Year’s party while bleeding from her face? No, no one does. Next.

Trump has a pattern when he attacks women. He goes for their age, appearance, vanity, and sanity. This is an incredibly sexist way to talk about women, but not surprising for Trump. Lacking any substance of his own, he’s built his success on tearing his critics down with petty, superficial schoolyard bully tactics.

Some day, when things calm down, I’ll tell the real story of @JoeNBC and his very insecure long-time girlfriend, @morningmika. Two clowns!

Just heard that crazy and very dumb @morningmika had a mental breakdown while talking about me on the low ratings @Morning_Joe. Joe a mess!

Remember how Melania declared the eradication of cyber bullying as the cause she’ll focus on as First Lady? How do we think that’s going?

Trump, of course, chooses to surround himself with people as callous as he is, who will defend his actions no matter what. Here’s Sarah Huckabee Sanders and White House social media director Dan Scavino, two adult humans designated to represent the views of the White House and by extension, America, had to say:

Sarah Huckabee Sanders on President’s tweet this morning: “This is a President who fights fire with fire”

Everyone else, though, is just at a loss.

Never imagined a day when I would think to myself, “it is beneath my dignity to respond to the President of the United States.”

Even other Republicans are speaking out.

Mr. President, your tweet was beneath the office and represents what is wrong with American politics, not the greatness of America.

Please just stop. This isn’t normal and it’s beneath the dignity of your office.

As for Brzezinski, her response might not be the most mature option, but we can’t fault her for it.

Okay, we’ll let you get back to your regular routine of calling your elected officials to make sure we don’t all lose our health insurance and basic human rights.

UPDATE: I can’t believe I didn’t think to check in on internet shade hero Pete Souza to see if he has a response. Because he does and, as you would expect, it is perfect.