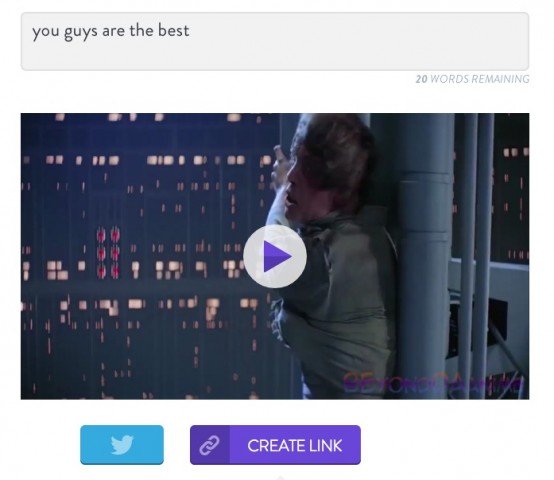 Goodbye, text messages. So long, GIFs. There’s a new form of communication in town. No, it’s not voice messaging, either, unless you expand the definition to include video montages from movies and TV that read whatever you type for them, because that’s exactly what Crumbles does, and it’s amazing.

It’ll even generate a link for you to send to your friends, so you’ll never be stuck trying to communicate your feelings through standard methods again. They’ll probably react kind of like this. As you can see, it has a pretty decent vocabulary and BEE AND PUPPYCAT CLIPS!

New #BeeAndPuppycat episodes released! So new words added to their dictionary! Check it out: http://t.co/uLYONuZdbH @cartoonhangover

This is for very important journalism purposes. http://t.co/kfkuMgHrtt via @CrumblesApp

So go ahead, be the hero we deserve and spend the rest of the day bothering people by speaking only in video montage. It’s Friday, and everyone’s probably already mentally checked out for the week, so why not? (Psst Crumbles, can we get an embed code button?)