Vote With Your Stomach: 10 Crowdsourced Foods 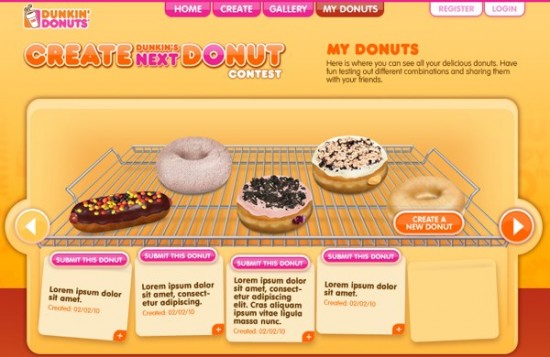 Dunkin Donuts‘ next new donut will be powered by viewers like you. According to Mashable, the company is celebrating its 60th birthday by crowdsourcing the design of their next donut in the “Create Dunkin’s Next Donut” contest, with the winner receiving $12,000 and seeing their donut for sale at Dunkin.

But they’re not the first: below, 10 food and food ideas created by committee:1. Dunkin Donuts

More details on the Facebook contest from Mashable: “After the submission deadline, donuts will be judged internally, with the company selecting the top 12 finalists, whose donuts will be put up for vote online beginning in April. Each of the 12 finalists will also get a $1,200 cash prize, a year’s worth of donuts, a Flip HD camcorder and a trip to Dunkin’ Donuts University to bake their donuts and meet with chefs. The grand prize winner takes home $12,000 and will have the honor of seeing their donut sold in stores for a limited time.”

The result: a concoction that was eerily like Powerade’s promotional drink for The Matrix: Reloaded. As we wrote at the time: “Connect is “a tasty black cherry-lime flavor made with caffeine and 8 key nutrients.” Do you know what else was black cherry-lime flavored, according to Wikipedia? You guessed it: Powerade’s Matrix Reloaded promotional drink from 2003. Coincidence?” 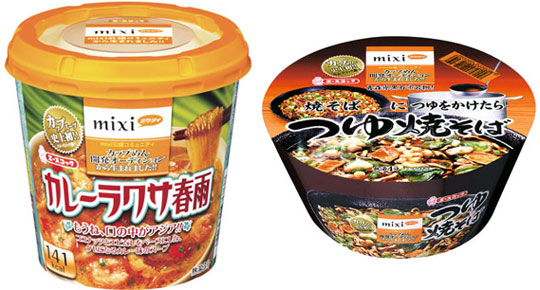 In a promotion that uproariously did not occur on Facebook, Japanese instant noodle company Acebook collaborated with Japanese social networking site Mixi to come up with new noodle flavors, (successfully) playing off of the stereotype of plugged-in computer geeks as ramen-slurpers.

PSFK, in 2008: “Over 4000 users voted for the following winning flavors that will be debuted in December: Collagen noodles, Milk Tantanmen, Bacon, egg, and vegetables and Ginseng Chicken.” We knew you could do it, collagen noodles! 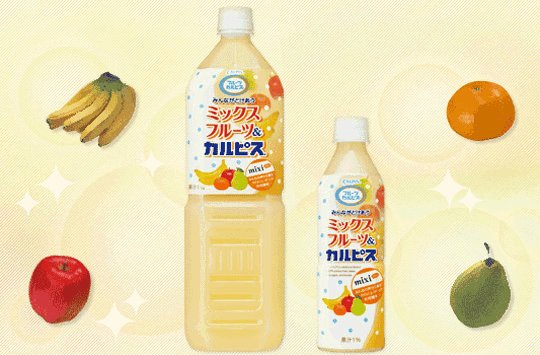 Drinkable, but not Matrix-y, Mixi also teamed up with Calpis to make a crowdsourced drink. PSFK: “The collaboration included not only the flavor combinations, but also the packaging design and advertising copy. The winning entry for mixed fruit was a blend of apple, pear, mandarin orange, and banana.” 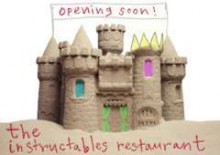 Wielding the power of the masses to make a product is a good way to make buzz and a few bucks, but this conceptual restaurant takes it a step further: their entire menu consists of recipes available on DIY community site Instructables.com. It’s currently a ‘virtual restaurant,’ but has set up temporary locations in Amsterdam and elsewhere.

Everything in the restaurant is downloaded from Instructables, and what we could not find there, we added to its contents. Download it or take the instruction with you from the restaurant during your visit.

In some respects, crowdsourcing a cookbook seems like an easier leap to make than, say, a donut. But it becomes a more serious enterprise when it’s headed up by a top New York Times food critic, Amanda Hesser, along with food writer Merrill Stubbs.

As reported by TechCrunch in August, food52 “will result in its own cookbook to be published by the Harper Studio (which is also publishing the Gary Vaynerchuk ten-book library). Each recipe in the book will come from the Food52 community.”

7. Walkers Potato Chips: “Do Us a Flavor”

Back to actual food, that you can eat. British potato chip interest Walkers ran a crowdsourced potato chip contest that yielded six finalists — Fish & Chips, Onion Bhaji, Chocolate & Chilli, Crispy Duck & Hoi Sin, Builder’s Breakfast and Cajun Squirrel. The team behind the eventual winner, Builder’s Breakfast, split £50,000 and 1% of the retail sales of their chips. Not too shabby!

The similarly-named (though slightly more altruistic-sounding) Ben & Jerry’s contest challenged customers to … come up with a new flavor of Ben & Jerry’s Ice Cream. On Facebook. The winning entry, “a caramel ice cream with praline almonds and a caramel swirl” called Almond Delight, beat out 100,000 other flavors from 15 countries to net its creator an all-expense-paid trip to the Dominican Republic.

When noted Australian yeast spread/national punchline crowdsourced the naming of their latest revamp, the winner was called “iSnack 2.0.” This is actually what it was called.

Fortunately, says the contest winner, “It was all a bit tongue-in-cheek, really. The ‘i’ phenomenon and web 2.0 have been recent revolutions and I thought the new Vegemite name could do the same.”