And not just for the user. *rimshot* 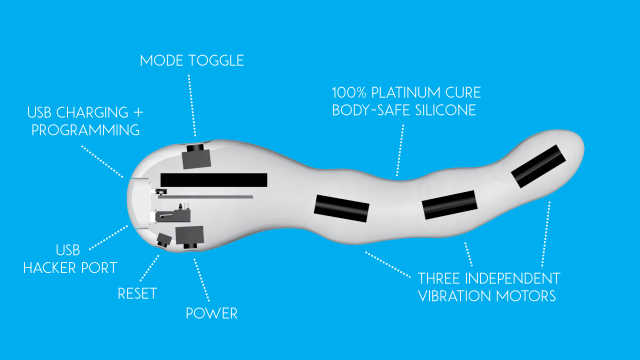 Nunchuck – A standard, simple, and powerful control for the toy. The joystick can manipulate power and pulsing patterns. Shaking the nunchuck’s accelerometer can modulate the frequency of the vibrations. To fulfill one major request from Beta testers, we also programmed the “C” button as an easy “kill switch” to shut the toy off right when you come!

Video chat – We process the image coming from a webcam. The more movement in the image, the more intense the Mod’s response.

Biometrics – A heartbeat sensor lets you feel your partner’s arousal in the throbbing toy. This one is a real favorite — it’s super cool to feel the rhythm increase with your partner’s excitement.

Web – Make interfaces directly within a web browser. Great for cyber sex, or giving web-geeks a quick way to control their toys!

Soft circuits – A soft stroke sensor that triggers vibrations based on touch. Could be really cool embedded in the tail of a fur suit!

Also it’s got just like a regular button, for, you know, the vanilla among its audience.

Of course, with the perils of crowd funding come the perils of maybe not getting the project ever. But some of the Mod’s IndieGogo perks are pretty interesting in their own right—like a Dilduino board, a specially designed Arduino derived microcontroller with features designed for maker projects with needs similar to The Mod (like a battery that can recharge over USB). Whether The Mod will ever get made is still up in the air at the moment: on the one hand, there’s a month left in the crowdfunding period, but on the other, they need still more than $40k. Here’s hoping they get it up after all, if only to see the crazy configurations the Mod gets put to.