Tis the Season for Creepy Winter Folklore! | The Mary Sue

Gryla and Yule Lads and Mari Lwyd, OH MY! 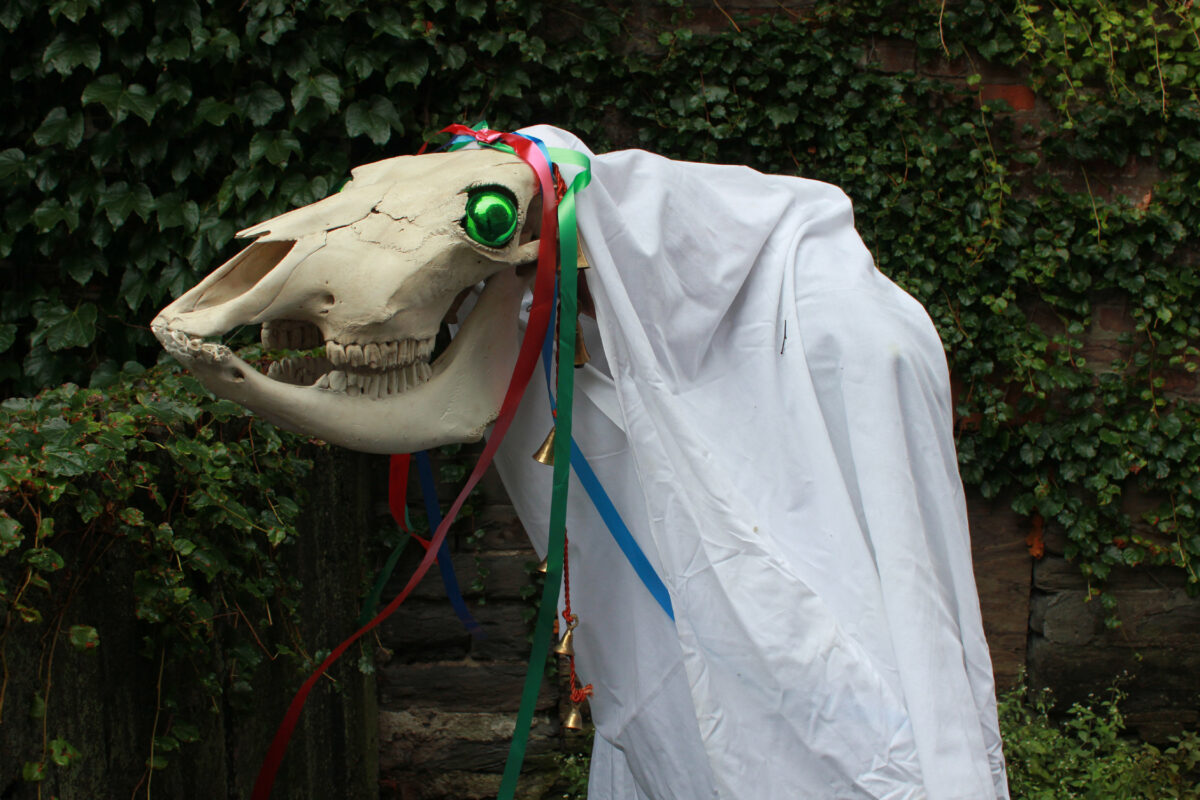 It’s the most wonderful time of the year, and by that, I mean one of the creepiest when it comes to folklore and local customs and characters. While we often think of Yuletide as a time for cookies and lights and presents and decorations, we have to remember that we have so many celebrations in the literal darkest time of the year for a reason: to drive that darkness back.

But the dark is still there, and we can see that in some of the fantastic bits of lore celebrated in this very pagan season, many of which were showcased yesterday in the final Folklore Thursday celebration of the year on Twitter.

First up, our cover gal and one of my favorite strange winter traditions: The Mari Lwyd (Pronounced Merry Lood). This Welsh holiday tradition sees a person carrying a horse skull on a stick, decked with ribbons and a sheet, parading about a town singing, doing skits along (sometimes) with men dressed as Punch and Judy, and generally entertaining people. Because nothing says holidays like a horse skull!

CHRISTMAS IN WALES: A THREAD 🎄🏴󠁧󠁢󠁷󠁬󠁳󠁿

“One of the most curious customs which was once in vogue about Christmas time was the procession known as Mari Lwyd, a man wearing the skeleton of a horse’s head decked with ribbons and rosettes.”
1/#FolkloreThursday #Wales #Christmas pic.twitter.com/FphSNgoDfz

The Mari Lwyd gang would sing a jolly ditty, such as:

#FolkloreThursday The Mari Lwyd travels with a troop of people who represent the dying of the old year and rebirth of the next, they cover both positive and negative aspects of the new year. They go house to house, if you lose the pwnco the troop will enter and chase bad luck out pic.twitter.com/3C11cB0SzS

The Mari Lwyd has seen a bit of a revival, in recent years especially among folklorists and even neo-pagans. It’s led to some beautiful art and even some fun memes!

The Mari Lwyd fits in with a much larger set of winter traditions known as wassailing, which is pretty a far more pagan and raucous version of Christmas caroling. It involves groups going singing from house to house, often demanding drinks or sharing winter blessings, and often time this would be done in some sort of costume, and many of them were of hooded animals. In Kent, it was called Hoodening. The traditions also have a lot in common with morris dancing, mumming, and other pseudo-pagan folk traditions.

And they aren’t just limited to Britain. These ancient folk practices are popular all over, and they tap into a much deeper part of winter: when we confront and interact with the archetypal, the primal, and the specter of death along with the promise of rebirth.

Christmas is coming… beware the creatures of festive folklore!

Traditionally taking place during the five days before Christmas, the ancient Slavic “Koleda” ritual involves groups of singers, sometimes in animal masks, passing from house to house singing special songs and offering blessings of prosperity for the new year.#FolkloreThursday pic.twitter.com/VQVDyZMKXn

Szczodre Gody is a Polish & Slavic feast at the winter solstice, to celebrate the “new sun”, as in the coming of longer days. You’d eat honey for happiness, apples for health, fish for fertility, & more! There would also be singing, while dressed in costumes 🇵🇱 #FolkloreThursday pic.twitter.com/9R9TKsO3Qq

This one is loosely based on the one that escorts Westminster morris team in London. They can also be found lurking with intent at traditional mummers plays and getting up to no good around the houses at new year

The Baydon Christmas Mummers’ play was collected by Henrietta M Batson in 1900, from Charles Farmer. The traditional form was modified in Aldbourne for 2018, with the return of The Doctor to Devil’s End to save the day (and King George) with a sonic screwdriver. #FolkloreThursday https://t.co/SqIN1C0iZS

1/4 The #Yule goat is from Northern Europe and Scandanavian #folklore. It dates to pre-Christian times and is also known as the Julbocken.
Yule Goat – John Bauerhttps://t.co/xqmGCM82z9 #FolkloreThursday #Christmas
#greetingcards #illustration #giftideas
#art #homedecor

My favorite variation on this that I discovered just today in the Folklore Thursday celebration was the Schnabelperchten … a terrifying creature from Austria that’s seriously committed to cleanliness.

On Jan the 5th in the Rauris Valley, Austria, Schnabelperchten, strange beings with large beaks creep round homes checking they are clean. If they’re not, they slit your belly open with scissors and fill it with all the dirt #GothicAdvent #FolkloreThursdayhttps://t.co/iN1MaLflmh pic.twitter.com/ZV1uc3ba2K

This is some Tim Burton-level Christmas horror right here. And we even have a video! Sound on to appreciate the terrifying quacking.

There are apparently lots of winter creatures and characters who are extremely into getting children to behave, stay clean, and generally terrify everyone. Yule hags and tule lads abound.

In the darkest dusks and dreary dawns of the blackest winter nights . The Morwyn Goch roams the pale paths of the Swansea Valley . Enjoy a traditional Ghost story on this winter night . #folklorethursday @FolkloreThurs. . Y Morwyn Goch told by Owen Staton https://t.co/8LiTYKvpjv pic.twitter.com/CY3eIiN0ZZ

#FolkloreThursday Perchta is the bookend to St. Nick. An old hag who appears around Epiphany, she also makes house visits to make sure all the spinning has been done and everything is clean (and woe to those who haven’t). She’s also accompanied by furry monsters, called Perchten pic.twitter.com/Txyd6NdmUe

Frau Gauden is a being from Mecklenburg lore. Cursed b/c she preferred the Eternal Hunt to Heaven, her daughters were turned into small dogs to pull her sled. They visited homes during the 12 Nights of #Christmas to punish the lazy & reward the virtuous. #FolkloreThursday pic.twitter.com/RkWvRbnJMR

Gryla is the Icelandic ogress of Christmas. As the poem goes:
“Down comes Grýla from the outer fields / With forty tails / A bag on her back, a sword/knife in her hand, / Coming to carve out the stomachs of the children / Who cry for meat during Lent.”

Gryla and her Yule lads, and also tales of the Icelandic Yule Cat, are especially fascinating. They definitely get around.

The Yule Cat of Iceland (Jólakötturinn) is a huge terrifying cat who eats those who don’t get new clothes for Christmas. She is believed to be the pet of the equally terrifying giantess Grýla, mother of the Yule Lads. #WyrdWednesday 🎨 Adverbly pic.twitter.com/aU7ELKYDQT

This #FolkloreThursday is a warning. #Gryla, the child eating giantess from #Iceland, her sons, the #YuleLads, will be visiting soon for 12 days each. We’ll be sure to keep you updated when a new #YuleLad arrives and when they leave. pic.twitter.com/34Q5Pe8x71

Just found out about the 13 Icelandic Yule Lads.

— Drumbrae Library Hub is getting ready to open! (@DrumbraeL) December 4, 2020

And finally, what Christmas would be complete without … uh, Christmas Spiders????

Did you know… thanks to a European folktale, some Ukrainian Christmas trees are decorated with spiders?

In “The Legend of the Christmas Spider”, a kind widow can’t afford tree decorations. But she wakes on #Christmas Day to find it glistening with cobwebs!#FolkloreThursday pic.twitter.com/RJ0kgj9cjv

What’s your favorite creepy Christmas tradition? And if you’re wondering why we didn’t get into Krampus and all the other bad Santas, don’t worry … they’re coming to town very soon.