If you’re shopping for holiday presents, may I recommend a gift that will please STEM folks, dinosaur enthusiasts, Jurassic Park partisans, action figure aficionados, and, well, just about anyone who likes cool things?

The indie studio Creative Beast has a fun, stunning, and varied collection of dinosaur action figures for every person on your list. Best of all, they’re created with scrupulous attention to detail by using the most accurate and up-to-date scientific information about our favorite giants of the past. That’s right, you can now have a feathered velociraptor of your very own.

I actually gasped when I first laid eyes on this guy (that’s Linheraptor exquisitus to you): 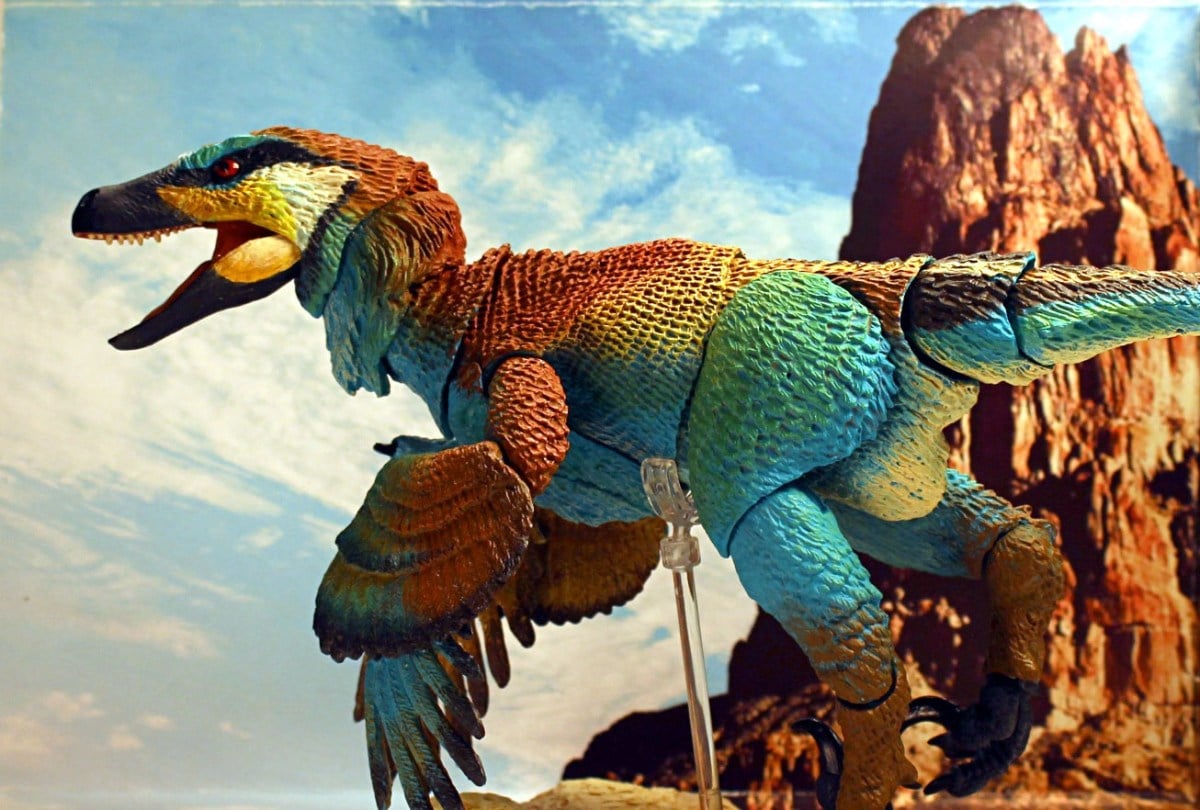 This agile desert hunter relied on its sharp sickle claw and amazing speed to capture prey. Named after the district where its fossils were discovered and known from just one nearly-complete skeleton, Linheraptor exquisitus features eye-popping reds, yellows, blues, and blacks — just like tropical birds. (Linheraptor exquisitus on Creative Beast, $49.99)

Creative Beast’s “Beasts of the Mesozoic” line was started by toy designer and sculptor David Silva, who has worked for companies like McFarlane and Hasbro. Silva’s first run of these majestic creatures began with a popular Kickstarter campaign in 2016 that made the news as fans flocked to the idea of scientifically accurate dinosaur figures.

And when they say detailed, they mean detailed. Creative Beast sent me a couple of dinos to examine up close. Not only are they gorgeous, but they’re the most articulated action figures I’ve ever encountered. I’m currently hanging out with Velociraptor mongoliensis.

Perhaps the most recognizable name in the dromaeosaur family, Velociraptor mongoliensis was not the man-sized villain of the movies but a “Swift Robber” from the deserts of Mongolia. Featuring beautifully sculpted feathers, stunning color, and of course that terrible toe claw, this figure makes a wonderful centerpiece in any dino-centric collection! (Velociraptor mongoliensis on Creative Beast, $49.99)

Like all the raptors in the raptor line, it features 26 points of articulation. I can move individual toes, swap out its claws, reshape the cleverly wired tail, open and close its mouth (which is full of remarkably tiny, perfect teeth and a movable tongue), and that’s just to start. It’s astonishing how many different ways there are to manipulate this figure, and I fear it may have ruined me for superhero toys forever. The painting and sculpting are remarkable and vivid for a plastic collectible; you can see every single individual feather, and those claws are pointy.

Beyond the expansive raptor line (which features a three-pack of adorable nestling baby raptors), there’s also a new Ceratopsian series. These are the robust dinosaurs with horns, beaks, and frills that not only stand up to the rigors of playtime, they make for striking statement pieces on display. Meet, for example, my pal Styracosaurus albertensis: 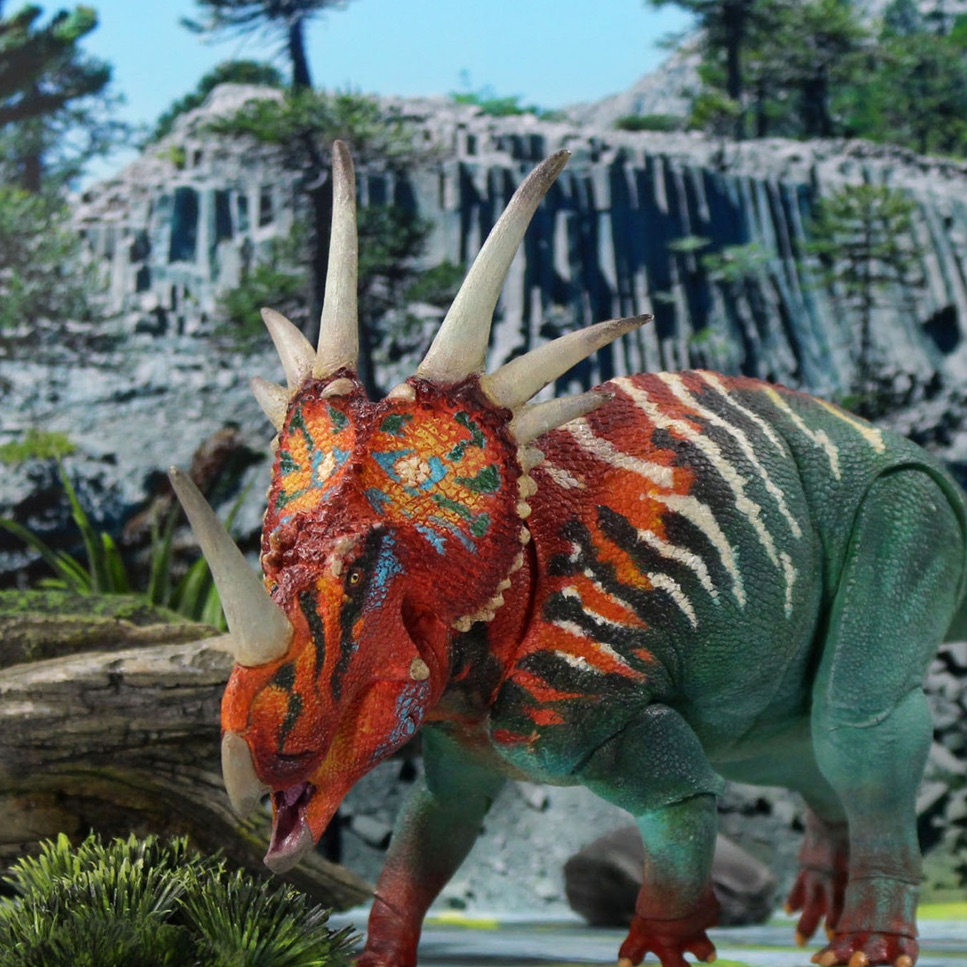 Or catch everyone’s eye with the inimitable Pachyrhinosaurus lakustai: 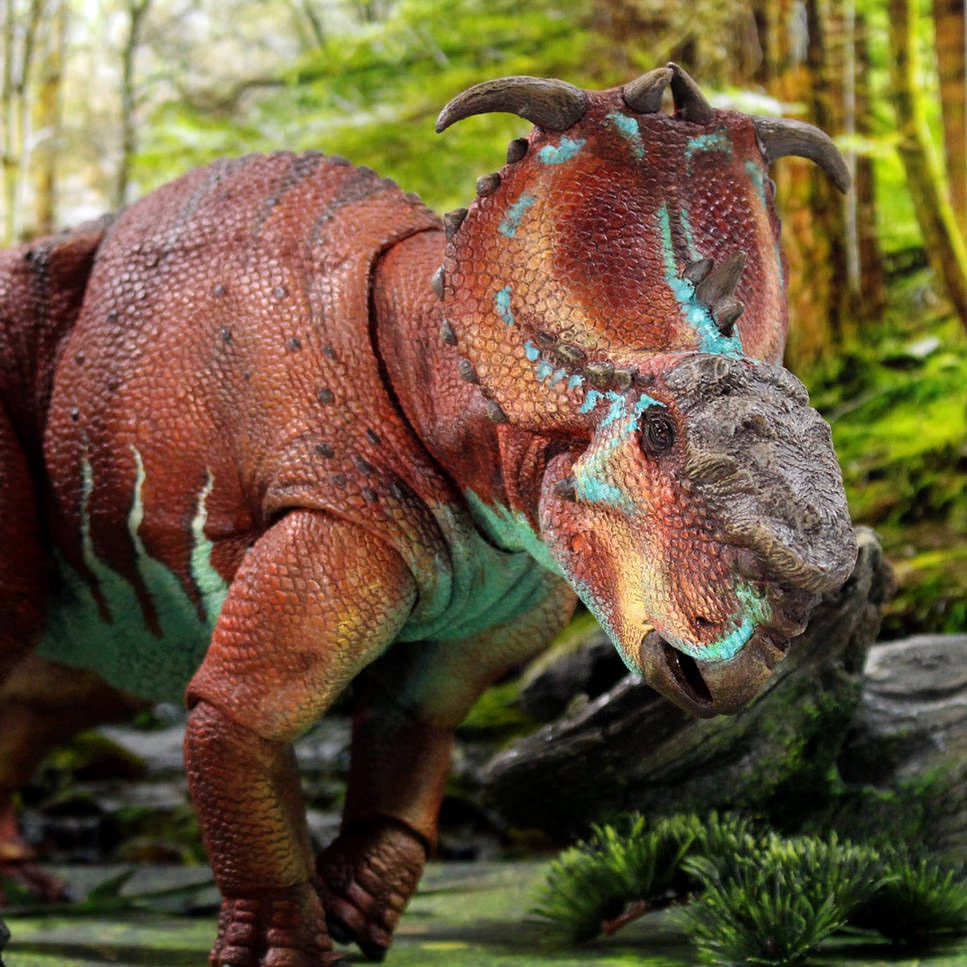 Pachyrhinosaurus lakustai is unique even among its amazingly-diverse ceratopsian cousins. This 15” long action figure highlights the dinosaur’s large flat bosses over its nose and eyes, instead of the pointed nose horns many ceratopsians don. Its one-of-a-kind frill ornamentation put this four-legged giant in a category all its own.  (Pachyrhinosaurus lakustai on Creative Beast, $89.99)

Also hanging out with me at home is the vibrant Chasmosaurus belli, who seems, dare I say it for a dinosaur who weighed up to two tons when it roamed the earth, rather cuddly. Chasmosaurus belli also looks great posed amongst your household plants. 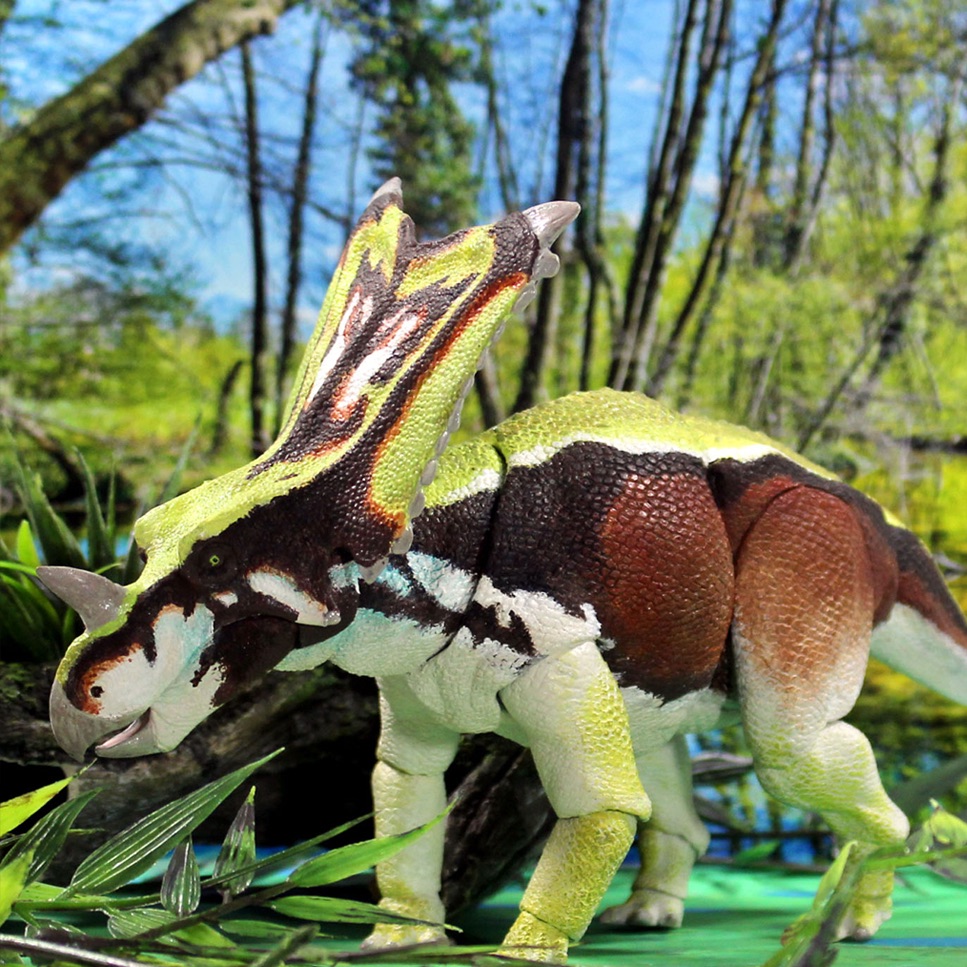 This 10.25” figure showcases Chasmosaurus belli’s extended frill coupled with a high-contrast paint design of neon green, dark brown, light brown, and white. Discovered in Canada’s Dinosaur Provincial Park, this distinctive ceratopsian was just as likely to attract mates with its discrete frill as it was to repel potential predators.  (Chasmosaurus belli on Creative Beast, $49.99)

Many of the dinosaurs also come with stands, collectible trading cards, and backdrop designs against which to pose them. Here are a few more of my faves:

This handsome fella, Zuniceratops christopheri, is available in both a standard and an edition that GLOWS IN THE DARK. I love him. 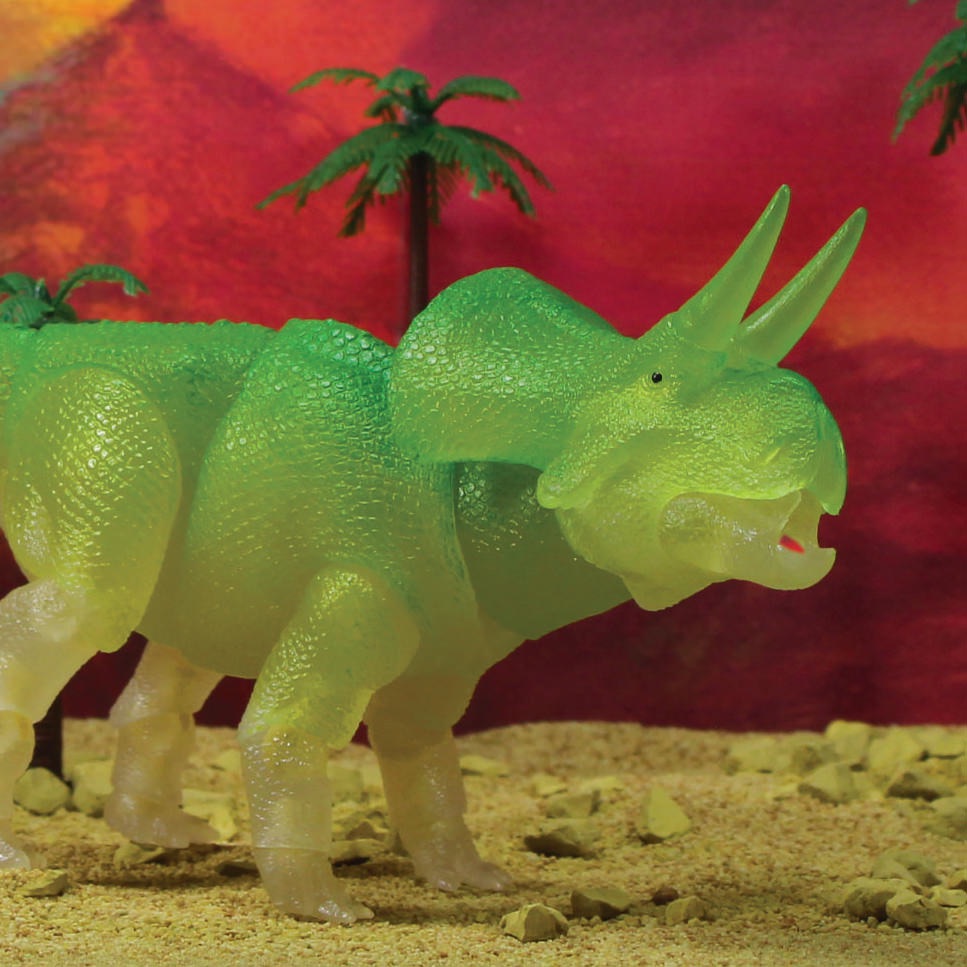 Who needs a night light when you have a three-horned glow-in-the-dark dinosaur to protect you from the Boogie Man! Measuring 8.5” from tip to tail, Zuniceratops lights up green in the dark after exposure to light. This dinosaur turns heads both night and day! (Zuniceratops christopheri on Creative Beast, $29.99 for Standard and Glow-in-the-Dark Editions)

Remember that baby raptor set? WHAT IF THEY WERE HIGHLY CUSTOMIZABLE BABY RAPTORS?!!?! Before they grew into ferocious adults, raptors were cute little babies — albeit with pointed teeth and razor-sharp claws. At 3” long x 2” tall, these three snow-white nestlings scale perfectly with the deluxe adult figures. With eight points of articulation and interchangeable parts, they are cute and highly customizable! (Nestlings 3-Pack at Creative Beast, $29.99)

Do you adore nothing more than dinosaurs showing off their feathers? Do I have a raptor for you. Say hello to Zhenyuanlong suni: 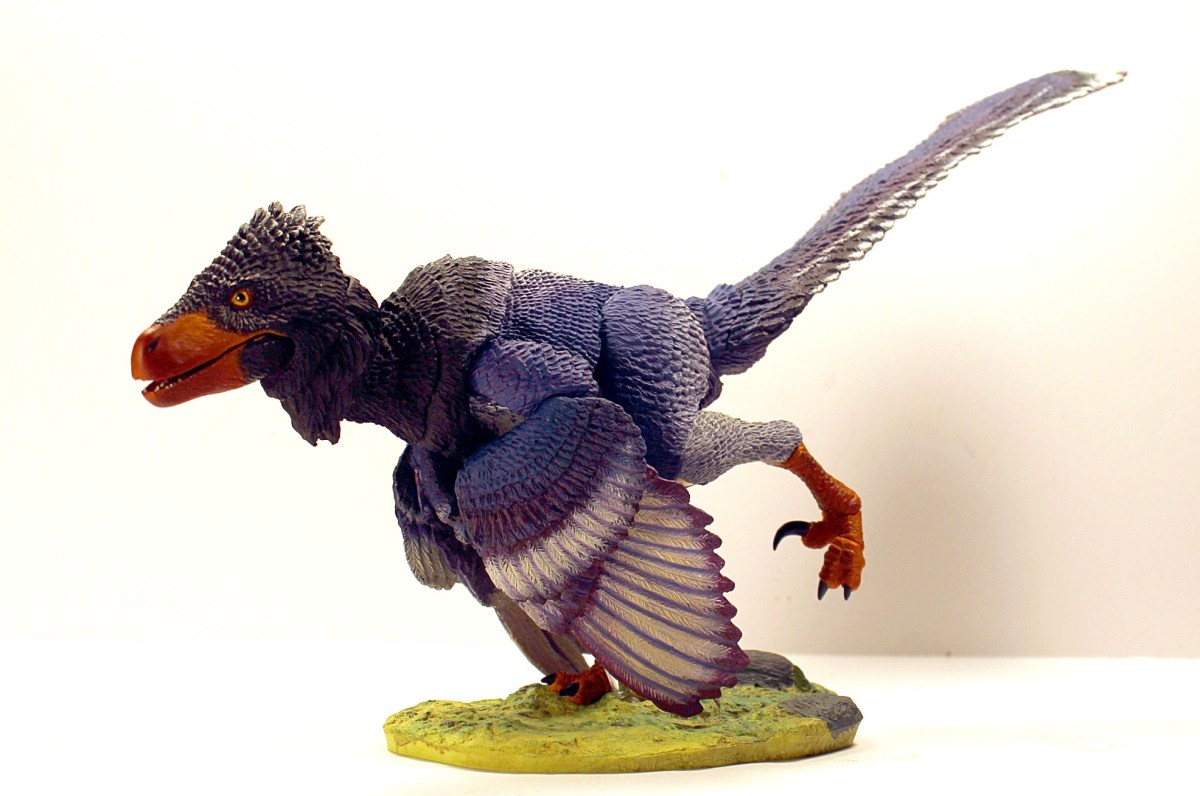 Known as “Zhenyuan’s Dragon,” Zhenyuanlong suni stands out from other dromaeosaurs due to its long arms and elongated tail feathers. Looking at Zhenyuanlong, it’s not hard to see that birds evolved from dinosaurs! However, its short arms could not power flight, so no one knows how these ostentatious feathers were used. (Zhenyuanlong suni at Creative Beast, $39.99 for Standard or Fan’s Choice Editions)

You can check out the full “Beasts of the Mesozoic” line at Creative Beast, or go straight to the Raptors or Cerotopsian series. There are many other dinosaurs to be found, as well as model kits if you want to build your own. I wish I could travel back in time and gift these to myself when Jurassic Park came out in 1993. Since I can’t, I’m going to continue saying “roarr” a bunch as I play with my exquisite dinosaurs and feel like a kid again.