Now Nothing Stands Between “Tawny Crazy Ants” And World Domination 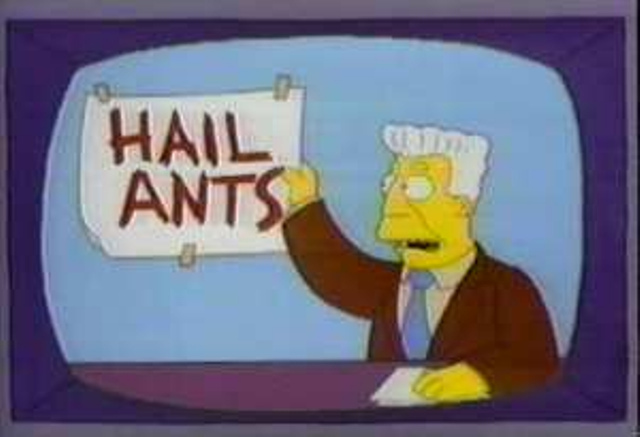 Invasive species are bad news even when they’re something non-violent, like koi fish or hydrangeas. But when alien invaders come in the form of fast-moving, voracious ants known for shutting down entire power plants and starting electrical fires, then we are really in trouble. All hail Nylanderia fulva, mankind’s new masters.

More commonly known as Tawny Crazy Ants, the pyromaniac pests first arrived in the US from South America in the 1980s. Since then they’ve been cutting an ever-growing swath of destruction throughout the country, moving North at a rate of 600 miles per year.

The remarkable ants are impervious to traditional pesticides, and have been ravaging ecosystems with their insatiable appetite for insects, crustaceans, and probably the American dream.

Unfortunately, Tawny Ants don’t create anthills, preferring to nest in dark areas (like your house), and have a reputation for short-circuiting electrical appliances.

Since conventional methods have done nothing to stop this crazy army from taking delight in watching the world burn, mankind has relied on another invasive species to help defeat a mutual foe–fire ants have a historic rivalry with their tawny counterparts, and use their powerful venom (three times as toxic as DDT) to combat the new invaders.

Here’s a video of an ant smack-down between the two species. Or a clip from the Pacific Rim director’s cut. Whichever.

Unfortunately, Edward LeBrun from the University Texas at Austin‘s College of Natural Sciences says that it appears our berserk ant invaders have a previously undiscovered defensive mechanism that protects them from Fire Ant venom.

In a new study published in Science, LeBrun and colleagues from the invasive species research program allege that Crazy Ants secrete formic acid all over their abdomen after being stung and effectively detoxify the sting–making them the first known insect species to develop an antidote for another insect’s venom.

The formic acid relieves pain by killing enzymes in the venom, allowing Crazy Ants to stay in the ring longer. This new defensive mechanism lets 98% of all Crazy Ants survive combat with Fire Ants–and that’s very bad news for our native species, wall sockets, and sense of human decency.

LeBrun writes: “As this plays out, unless something new and different happens, crazy ants are going to displace fire ants from much of the southeastern U.S. and become the new ecologically dominant invasive ant species.”

A New Dawn is coming, people. The Dawn of the Crazy Ants. Let’s get a huge magnifying glass ready and prepare ourselves for war.

(via 109, image via marsmettn tallahassee)