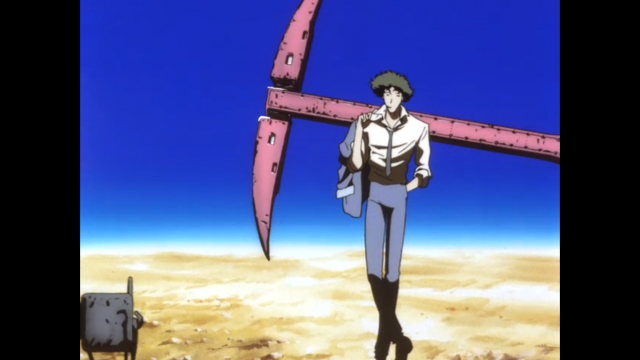 What a relatively small episode for the series. While there are moments that are “big” and action set pieces that once again demonstrate just how talented the artists behind the scenes are, the story itself is rather self-contained and it works. It’s an enjoyable, quieter episode which allows Spike to be Spike, and that’s when the show shines the most.

Even when I’m not 100% on board with a certain episode, or when I’m getting frustrated by how little is happening (which is rare, and clearly my own issue with the show) there are always the characters to rely on, and even if I didn’t enjoy the series immensely (which I do) I’d still love the characters. “Wild Horses” doesn’t spread the wealth for all the characters involved, but Spike gets a nice highlight, proving once again that he’s one of the best action hero characters in television canon. Suave, silent, and hard to rumple (but hilarious when successful) Spike is still a mystery, and while this episode gives up some minute details of his past, what makes Spike who is he is is still largely hard to put together.

Spike is separated from the group as he visits earth to see a man named Doohan, the original owner of his Swordfish II. However, it’s not Doohan who picks him up, but a young, baseball-obsessed man named Miles, a chatterbox to Spike, who would prefer to not talk at all. Stranded in a barren landscape, Spike has no choice but to let Miles be the one who takes him where he’s going. Cowboy Bebop is always great with scenery, never allowing themselves to do the same thing twice. Every galaxy, every planet, and even each ship has their own little parts that make them individual. It’s as if the inhabitants are continually trying to piece things back together, as we’re always seeing with Jet and his ships.

The villains this week are a colorful crop of characters, “Starship pirates” who steal other ships and their parts to distribute to others. Faye and Jet take the bounty, believing it to be an easy capture, but as is often the course with the luck of the Bebop crew members, nothing is ever as it’s expected and Faye and Jet find themselves in a pickle. The pirates use cables to install viruses that make the ships shoot each other, with their ships suffering monumental damage that takes them offline. We’re never really too concerned over the villains themselves, who are essentially nameless, faceless threats for the leads to overcome, but they do pose real challenges to the character, especially as Jet and Faye panic over what to do.

Spike must come to the two’s aid, and it leads to one of the funnier moments in the episode, and one which highlights just how similar Faye and Spike are when push comes to shove. The fact that they’re trying to exact their revenge in the first place is comical, considering they won’t be receiving a bounty, but the extreme measures they go to highlights the humor. Jet is wanting them to go about approaching two possible ships containing the hackers with delicacy, but, knowing Spike and Faye, this was never going to even be in consideration. Instead, the two decide attack the two identical ships, believing this will surprise the hackers. They believe that if they fire on both ships, they won’t run if they’re innocent, believing that only the guilty run away. Of course, both ships leave, a notion neither of them had ever considered (and considering his face, something Jet very much did). The two are so similar except for in the way they express themselves; Faye is extroverted with her beliefs and emotions, while Spike keeps things more buttoned up. However, both are loose canons and destructive cynics that believe they have life all figured out. I would love to see a two-hander episode just between these two characters. Brash, hot headed and richly drawn characters, they’re my favorites of the Bebop crew, and the ones who have been given the greatest and most interesting backstories. Let’s see more of them.

Their chase of the hackers also prove that “Wild Horses” is one of the funnier episodes of the series in the most recent run of them, not afraid to allow a joke to play out in ways that aren’t on the nose or heavy handed. We don’t even see the punchline of the joke after Spike and Faye’s hunch about the guilty turns out wrong, just see Jet’s reaction to it.

The crew finds the pirates again, and Spike manages to immobilize them, but in doing so, runs out of fuel himself. Stuck in the Earth’s orbit, Spike believes that his time has come and is going to go out with a cigarette wedged between his smirk. I kind of love the fact that the show, even for a second, pretends that Spike is facing any kind of real threat, especially since they’ve done this before. Clearly Spike is going to be fine, but the melodrama of Spike telling Jet where his hidden alcohol is is certainly entertaining. I do love that Spike faces his death in the same way he was prepared to face the loss of his ship, with a stuff happens, shrug it off sort of attitude.

Doohan and his assistant overhear this, and Doohan decides it’s time to unveil his remodeling of NASA’s Columbia space shuttle in order to save Spike. Since I never really warmed to Doohand/Miles and was much more wrapped up in the storyline with the space pirates (or, more specifically, the banter as the crew tried to capture them) I wasn’t too impressed with their rescue. I did love the animation however, and the ending shot of Spike’s silhouette against the wreckage of the ship is one of my favorite shots the series has ever done.

This is the way to do a small episode. Not much happens, but it feels full and well rounded and every character get’s their moment to shine.