You were all so right. 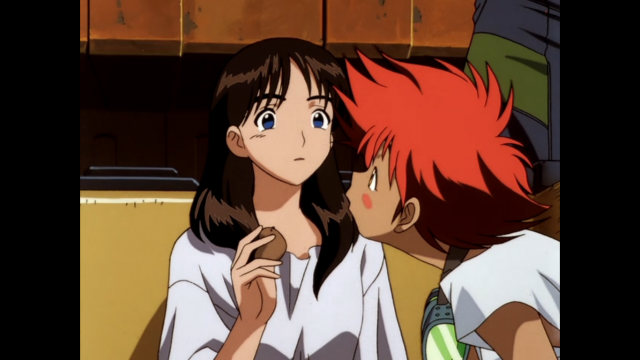 “This strange story began on a blistering hot day.”

Let’s just get this note out of the way: I, quite literally, had zero expectations when going into this episode. You all had prepared me for the worst, and that’s what I assumed I would see as soon as I hit play.

You will not be at all surprised then, when I tell you that I agreed 100% with all of you. I can totally see where it was a misguided episode and, worse, one that didn’t at all flow with the order of episodes. The problem with Cowboy Bebop is that their bad episodes aren’t necessarily terrible, but they’re dull. I found it difficult to concentrate on what was happening at a given moment, because it was an episode that dragged in every way possible.

The story’s first problem is that it centers itself on Jet, the crew’s least interesting character. Then, they do so little to try to even develop him as a character and instead simply focus their time on his relationship with the daughter of an old friend. He receives a mysterious message from Pao, telling him to meet him on Mars, but instead, he finds his daughter, Meifa, after learning that Pao is dead. This makes little sense after receiving the letter only three days earlier, and the two decide to look into it, which leads them to the mystery of the sun stone. All the while, they’re being tracked by the Blue Snake syndicate. With everything going on, you would think that the episode would generate more interest, but instead, it falls flat from the second it begins.

The episode ends with the two finding Pao, despite Meifa admitting they were never close, but he’s stuck in a vortex, unable to escape before his oxygen runs out. The only reason he sent Jet the note was so he could see Meifa one last time before he died.

It’s just a boring episode, to the point where I wished I had watched a second so that my recap wouldn’t be so negative. I can’t say I disliked it all, and like all episodes of the show, there were some real moments of beauty; they were just few and far between. The last episode, “Pierrot Le Fou,” certainly didn’t help matters, as it was my favorite episode this show has ever done and one my favorite episodes of anime period. It was gorgeous and haunting in all the ways the show should be. “Boogie Woogie Feng Shui” is meandering, seemingly more a placeholder than an actual episode. The 21st episode of a series shouldn’t be a place holder, especially with what I’ve been told are the strongest episodes of the series coming up. Nothing happens here that we haven’t already seen before, Faye and Spike are completely ignored, and rather than improving his characterization, the show makes Jet worse with his weird, potential infatuation with Meifa.

I cannot put into words just how outraged I was for a moment, preemptively, about the simple notion that Jet liked Meifa. They made such a point of how young Meifa was when he first met her—pointing out a photograph of him, Meifa, and her father that shows the age difference even more clearly—that it was nearly unfathomable to think that the show was going in that direction. But then he made some snide comment about being young enough to be her boyfriend, Spike called them a cute couple, and he and Faye gossiped about the two of them, and suddenly I was worried the show was going there.

To highlight some positives, the animation, as always, is on point in this episode, even if it lacks its typical kinetic energy. There’s a scene so simple in the middle of the episode, so nearly inconsequential that it would be easy to miss, that is vital to showcasing just how talented the animators are. Ed holds the luo-pan, which the sun stone will later be inserted into, as it spins one way to the next, and the fluidity of the motion and graceful way it swings, as if on a pendulum, makes it feel as if it were drawn ten years later.

That and the (also very brief) scene of Spike and Faye standing by the sea smoking, after being banned from the living quarters by Jet, who’s trying to make a good impression. Nothing happens, but the sky is painted in vivid oranges, pinks, and reds so that it’s hard to forget, especially offset by the two silhouettes facing it. The space travel is also gorgeous, but nothing we haven’t seen before and in better episodes.

The failing of the episode is, without question, the fact that it’s dull. It drags its feet the minute it introduces the character of Pao and never regains strength, trying to build momentum off a relationship between two people that we couldn’t care about.

I am now 21 episodes into this show, and I am wholly invested in what happens next, and I’m not exactly eager for it to end, but at this point, I’ve seen enough episodes to know that this is hardly all that the writers could accomplish.