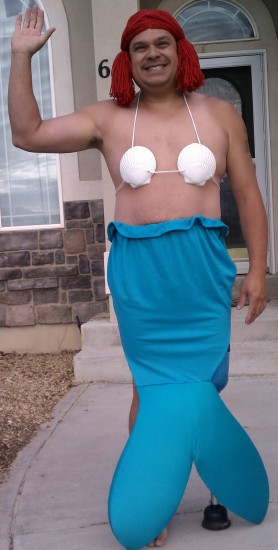 16-year-old Rain Price’s high school’s bus routes changed and he found that his bus would be passing by his house each morning. His dad, Dale, took this opportunity to dress up in a different costume each day and stand outside, waiting for the bus to pass by so he could wave to it. The first day of school, Dale was dressed normally for his wave. The second day, he wore a San Diego Chargers helmet. The third day, he wore an Anakin Skywalker helmet. The fourth day, he followed the Star Wars tribute by wearing swim trunks and a snorkel mask. Luckily for Rain, his peers on his bus didn’t take the easy opportunity to ridicule him for his wacky dad, but instead found the morning wave and change of costume fun.

Dale admits it took a lot of effort to continue, especially since he followed the rule of never wearing the same costume twice. Even though Dale says the costumes and weekday morning waves were “a way of letting him know that we really care about him,” Rain said he doesn’t plan on thanking his dad for the effort, since, for instance, his dad greeted his peers wearing a seashell bra: “I’m not going to reward him for this; his reward is seeing my embarrassment.”

Dale managed to dress up and wave at the bus for 170 days of the school year, regardless of the weather. Word of the morning wave and one-man costume party spread to out-of-town relatives, and they created a blog detailing each costume and greeting.

Dale not only donned a new costume each morning, but employed the use of props as well, such as dragging a toilet out onto the front porch and pretending to greet his son while on the pot: 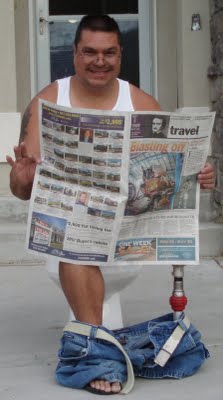 Gender-based clothing didn’t stop Dale, either, as seen by the above Ariel costume, and the below bride costume: 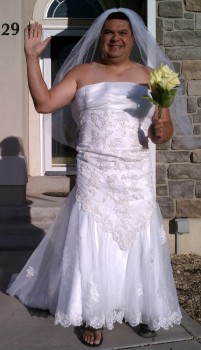 He also employed rule 63 and dressed up as Batgirl: 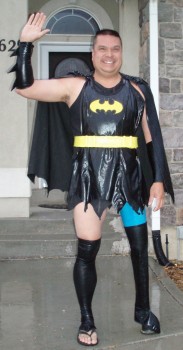 And Isaiah Mustafa, the Old Spice Guy, because why not: 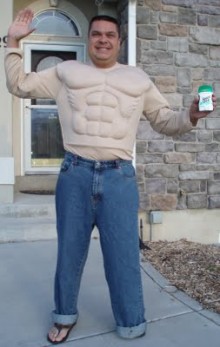 Check out the rest of Dale’s antics over at the blog chronicling the important work, Wave At The Bus.

(Deseret News via MetaFilter via The J-Walk Blog)