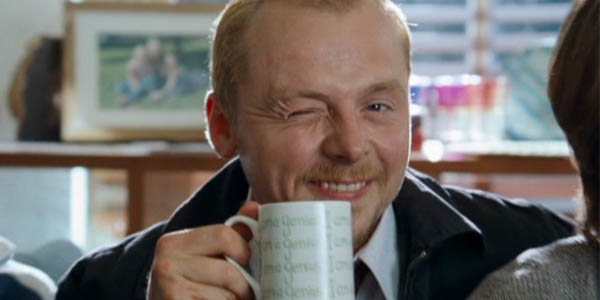 I began 2017 by enjoying one of my Christmas presents: a Blu-ray combo pack of Edgar Wright’s “Three Flavors Cornetto Trilogy” — Shaun of the Dead, Hot Fuzz, and The World’s End — in what I called my New Year’s Cornetto Marathon. Edgar Wright is already one of my favorite directors, and these collaborations with co-writer and star Simon Pegg are already among my favorite films, but what amazed me is how relevant these films are to the current state of the world. They can basically work as a how-to guide on surviving the world 2017 will bestow upon us.

Shaun of the Dead 2017 Survival Tip: Don’t wait ’til zombies get into your garden before you WAKE UP.

Many of us were understandably, um, perturbed, by the election of Donald Trump as President of the United States. Many were also completely surprised and thrown off-kilter. The thing is, we shouldn’t have been.

In Shaun of the Dead, Simon Pegg’s Shaun starts the film as “zombified” as the actual zombies he’ll eventually slay later in the film (and I will use the “zed-word,” thankyouverymuch). He shuffles about his day, barely paying attention, and even when the signs begin to get more and more ominous (a shuffling dude eating a pigeon in the park, people randomly running in a panic, his roommate’s hand having been bitten in a “mugging,” bloody handprints on the refrigerator door in the shop where he buys soda everyday), he doesn’t register anything to get alarmed about until there are zombies in his garden. And even then, he sees nothing out of the ordinary at first in Mary, the checkout girl who is his first zombie encounter, despite the fact that she does not look well at all. She literally needs to be impaled and then get back up in order for him to register something really out of the ordinary, and it’s only then that he springs into action. But by then it’s too late. Any chance he had to get out of town, save his friends, or save his mother have evaporated, and it’s all he can do to save his girlfriend and himself.

Donald Trump didn’t happen in a vacuum. He is the culmination of a slowly-building, worldwide wave of intolerance and fascism sparked by corporate greed, a shittastic global economy, and fear-mongering. This goes as far back as things like the subprime mortgage crisis, Occupy Wall Street, and the Arab Spring.  We can see symptoms in Venezuela’s financial crisis, increased anti-Semitism and Islamophobia in Europe, police brutality (particularly against the black community) in the U.S., someone like Vladimir Putin becoming President of Russia, and Brexit. Things have been happening, both here and abroad, that are basically repeating conditions that have already led to political turmoil, totalitarian governments, and world war throughout human history, but we’ve either been asleep, heads down and concerned only for our immediate well-being, or naively obstinate that something like that could never happen here.

It can, and it has. Indeed, it is happening. Shaun of the Dead is a cautionary tale, reminding us that we shouldn’t wait for zombies to be in our garden before we take action to shape our world. Now that the zombies are here, let’s break into the shed and find us a cricket bat.

Hot Fuzz 2017 Survival Tip 1: Even if the entire town is gaslighting you, stand up for what’s right.

Hot Fuzz is probably the film in the trilogy that most closely resembles the current political landscape in the U.S. After all, the fascist police chief, played by Jim Broadbent, literally talks about how he wants to “Make Sanford Great Again” years before a certain incoming Cheeto-in-Chief made a variation of it his real-life campaign slogan.

Like in Shaun of the Dead, people need to wake up. This time, it’s the residents of a small English countryside town called Sanford, a town that has won the prize of “Village of the Year” several years running, and whose residents have never questioned why, for twenty years, the murder rate has been so low, while the “accident” rate has been so high. They are so lulled into complacency by their seemingly idyllic surroundings, that when London’s top cop Nicholas Angel (played by Simon Pegg) shows up and starts pointing out really obvious murder clues, they will do anything and everything to come up with excuses and rationalizations for the sudden uptick in bloodshed. Meanwhile, the town is being run by an elite group of town elders who are determined to make and keep their village great, even if they have to kill a couple of people to do it, all for the greater good.

Nick could’ve just fucked off back to the city. In fact, his new best friend and police partner, Danny (played by Nick Frost), gets him out of a hairy situation toward the end of the film, and he is totally able to just leave and continue his career elsewhere. Instead, despite his frustration with the villagers insisting that murder just doesn’t happen in Sanford, and despite the police chief leading the rest of the secret society of elders in making Nick think he’s losing his mind, he insists on pursuing his leads and fighting the power, eventually convincing the rest of the police force to see the town for what it really is.

Supporters of the incoming administration would rather we focus on what it might do for the economy while ignoring the myriad ways in which they plan to chip away at our freedoms. Even some liberals who don’t support the administration are talking about how we need to “understand” the opposing side and “focus on the positive.” It often feels as if both sides (with an assist from the mainstream press) are trying to gaslight the majority of the country into complacency.

May we all ride into town on a white horse, (figuratively) strapped up and ready for a fight. “Making Sanford Great” was never about maintaining a status quo based on a imagined ideal. It’s about allowing the village to evolve and flourish. So, too, with our country.

Hot Fuzz 2017 Survival Tip 2: Human connection and being a good policemanofficer are not mutually exclusive

Nick’s personal journey has to do with the fact that he has trouble “shutting off” his police brain, and it goes on to affect his relationships with people. He’s an amazing cop, but he’s a horrible friend and boyfriend, and when he begins to start investigating the deadly goings-on in Sanford, we see how this character flaw even keeps him from being as good a cop as he could be. You can only maintain so much “law and order” if no one is willing to take in what you’re saying, and people will likely not take in what you’re saying if you don’t present it like a human person. And the only way to present things like a human person is to actually be a human person every now and again, remembering that you are not just your job, but a person with feelings who needs others in order to survive this tumultuous world.

Once Nick starts cultivating a friendship with Danny, however, he starts to loosen up and listen more. As he starts to care more about the town and the people in it, the villagers become more receptive to him and his point of view, and are given the space to start fending for themselves. No one can do anything alone. It’s important to nurture relationships so that, together, we can make the world better.

I also can’t help but think about the militarization of police forces across the United States and the seemingly endless police brutality that we see in the news every day. As I say, “being a good policemanofficer and human connection are not mutually exclusive,” and yet what seems to be happening now is that police officers are trained and encouraged to think of certain marginalized communities as “perps” rather than people. Thus dehumanized, it’s very easy to shoot someone who’s running away, or beat someone until they’re barely conscious. For the greater good.

Yet Hot Fuzz shows us that a good cop is a cop that puts citizens above their own achievement.

The last film of the trilogy, The World’s End, finds Simon Pegg as Gary King, a 40-something man whose best day happened when he was in high school. He gets his childhood friends back together to go back to their hometown to complete a rite-of-passage pub crawl they started, but never finished. Everyone seems to have “grown up” except Gary, and after a life plagued by depression and addiction, this Golden Mile pub crawl to The World’s End pub is all he has.

The film is very much about the fact that “you can’t go home again,” and Gary has to learn to move on. However, since the plot also involves an alien, sentient life force called The Network that is trying to ready humanity for participation in the greater galactic community that turns those who don’t join them willingly into androids called “blanks,” it’s also about what happens when humanity as a species has its back up against the wall.

Apparently, it takes a lot to push us back up against the wall, as we are a very stubborn species. We don’t like being told what to do, and we very often enjoy doing things that are directly antithetical to our best interests. Our deep desire for freedom and autonomy is one of our best qualities. It’s also one of our worst, as it too often prevents us from seeing solutions that would require cooperation. And sometimes, as we pursue individual interests and pleasures at the expense of the people and world around us, those things go to shit and our lives, in the parlance of 12-step programs, “become unmanageable.”

However, the problem isn’t hitting rock bottom. It’s all about how we respond to hitting rock bottom. In The World’s End, The Network is defeated (or, rather, annoyed into leaving humanity alone), and they take with them all the technology they’ve ever shared with Earth, leaving the planet in total upheaval as humanity figures out how to survive. But survive they do, and they have to learn how to reconnect while living simply. It’s a mystery as to whether or not humanity will “get it right this time” after that, but like I said, humanity is a stubborn bunch. We’re certainly capable of surviving all sorts of hardship and loss, and each time we suffer catastrophe, we get a little bit better.

I don’t know what the future holds, or what the incoming administration will actually do. What I do know is that after the hard reset of this election, after the unprecedented way in which much of the country was shaken to its core, we have the potential to fight for something better and win. The answer is not “Making America Great Again,” it’s about making America great in the first place by making sure that America prioritizes all of its citizens. We may have needed a kick in the pants to wake us up. Hopefully, we’re wide awake now.

Let’s get anyone who would allow our country to succumb to its worst impulses back on their rocket and send them packing.

I plan on making my New Year’s Cornetto Marathon an annual event, at least for the next four years. I love how they inspire me through humor to fight the good fight, and can remind all of us that we’re built to survive.