Here’s a Milk Glass Made From a Cookie, You’re Welcome

Quick, someone make a wine goblet made of cheese, the world needs you. 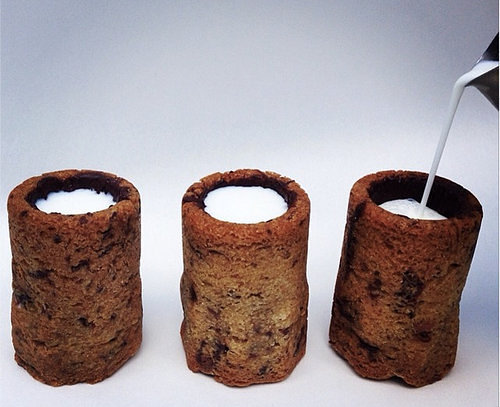 Some days you write about life-enhancing advancements in medicine and science, some days you cover revolutionary dessert breakthroughs. Thanks to master pastry chef Dominique Ansel, I think today is both of those days.

Ansel created New York’s infamous Cronut, but until last week was apparently unfamiliar with the beautiful marriage that is milk and cookies — telling Eater it’s not “a natural combination in French culture.” To French children everywhere, je suis tres sorry.

However, last week Ansel finally tried an Oreo dipped in milk (no word yet on if the Oreo was already broken open, what variety of twisting method he recommends to get at the frosting, or if it was double-stuffed.)

Inspired, he posted a drool-worthy pic of the new concoction on Instagram yesterday, saying “if everyone was drinking milk with cookies, you might as well make a dessert that allows them both to be combined.” Concerned that the cookie consistency might be compromised by the creamy milk? Don’t underestimate Ansel’s genius.

The mad scientist promises that the chocolate chip cookie recipe he used will ensure the shotglass “stay[s] crispy and moist in parts.” The treats will be available along with Ansel’s cronuts on Sunday, March 9th at SXSW.

When asked if the cookie cups would be made a regular staple at his Soho bakery alongside Cronuts, the pastry chef just said “we’ll see.” Just in case, how much is a ticket to Austin?

Our Senior Editor Glen Tickle is going to be at SXSW this year and will try to get his hands on one of these, but weirdly he described himself as “not much of a cookie guy” so it’s not high on his list of priorities. Do it for journalism, Glen! Do it for journalism!

(via Sploid and Eater, image via @dominiqueansel on instagram)