Are Comic Cons Breaking The Law By Not Paying Their Volunteers? | The Mary Sue

Are Comic Cons Breaking The Law By Not Paying Their Volunteers?

One IRL lawyer examines the circumstances surrounding our biggest cons. 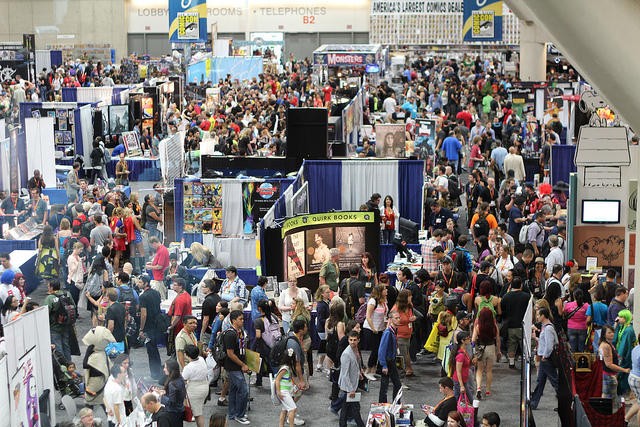 Conventions are a huge and inescapable part of geek culture. Nowadays, It’s almost impossible to find a major metropolitan area that doesn’t host some sort of annual comic con. Beyond that is an ever-expanding slate of touring cons put that move from city to city like a sort of geek circus, which can either focus on a certain show or just geekdom in general. In short, where once we had to drive hours to meet our brethren in third-rate expo centers once a year, cons are now everywhere. And they’re very big business. In order to fuel a machine that big, you need a lot of people working. That’s where the small armies of volunteers that power the con circuit come in… and that’s where the business of cons might be courting serious trouble.

Here’s the big problem: under the law, many convention volunteers may not legally qualify as volunteers at all. Instead they may be workers who are legally entitled to things like minimum wage and overtime. If people who ‘volunteer’ at cons are actually entitled to be paid for their work, the repercussions for everyone might be major, including attendees.

So how can we tell if cons should look at their practices and if everyone should start calling their lawyers? The answer is (because it’s a legal answer) complex. Under Federal and State law, there are very specific definitions for the kinds of people that do paid work; that is employees, owners, and independent contractors. Unfortunately, the line between someone who should be a paid employee or contractor and someone who is a legitimate volunteer is extremely blurry and badly defined; however, there’s enough law on point on the subject to make convention organizers worry.

The easiest way to tell if it’s okay to call someone a volunteer is if the organization they’re working for is a non-profit or for-profit. Though a select few cons are still run as non-profit cultural organizations (such as the big daddy, San Diego Comic Con) most cons are actually for-profit operations.

The size of these companies varies. Outfits like Creation Entertainment, which runs dozens of specific show-focused (i.e. Supernatural and Stargate) conventions all over the country, is a closely held corporation – meaning it doesn’t have publicly-traded stock and is still owned by a few people. On the other hand, Wizard World Conventions, another touring con, is a publicly owned and trade company in the US. Lately, more and more big cons, such as Chicago’s C2E2. New York City Comic Con, Emerald City Comic Con and the Pax Cons have been bought up and are now owned by ReedPop, a subsidiary of a giant, multi-national corporation.

So, the vast majority of volunteers are volunteering for money-making companies. You only have to look at the cost of tickets and number of attendees at these cons to guess that these guys are making a not insubstantial hunk of money. It’s important to note that, though most these organizations are now for-profit, they probably almost all started out organic and small; just a few geeks getting together to celebrate what they love. As they’ve grown and become more complex, it’s completely likely these organizations didn’t think about the legal ramifications for their volunteers of their changing models and structures. But even if no one is intending to skirt the law, it’s possible for a court to find liability.

For-profit companies are totally allowed to use volunteer labor, but their use of volunteers has to meet those murky standards we talked about earlier. In lawsuits about these things, courts will look at what’s called “the totality of the circumstances” in making a judgment. That just means they look at everything. One of the major tests/factors a court might use in judging if a person is an employee or volunteer is the “economic reality” of the situation. Can the person come and go as they please? Are they held to specific standards and hours? Are they engaging in the volunteerism with an expectation of future real employment, rather than just for their selfless enjoyment? That last factor may be the most important to watch out for, as many fans do volunteer with convention companies hoping to eventually get better positions and become a paid member of the team. Another factor can often be the kind of work the company has someone doing: is it the sort of work that they pay other people for, just not the ‘volunteers?’ For instance – some celebrity handlers are paid and others are not.

Perhaps the biggest danger zone is if the volunteers receive some sort of compensation for their time. Even if it’s something as simple as a free photo op with a celebrity, a court may take that action as an acknowledgement by the convention organizers that what the ‘volunteers’ are doing is worthy of compensation. It’s only one step from there to agree that these are people doing work that needs to be paid at least minimum wage, and possibly overtime.

So, what happens if it turns out con volunteers aren’t volunteers at all? Well, failure to pay people minimum wage is a pretty big no-no under Federal and State law, and the penalties for that might include not only paying back wages but penalty wages, interest and attorney fees. All of that can add up, especially if a group of volunteers decided to initiate a class action, which would increase these number exponentially. The cons might then also be liable for payroll taxes, unemployment insurance taxes, workers’ compensation premiums and a whole mess of other stuff. Even if this doesn’t sink the businesses and cons start paying people; that might mean ticket prices will go up instead of the companies compromising their profits.

The consequences of worker status are important for the volunteers as well. If you got compensation for your time as a (non-)volunteer, even if it wasn’t minimum wage, you still have to report that on your taxes, because it’s still income. And failure to report income is, you guessed it, tax fraud.

Another area of risk for organizers and volunteers is what happens if someone is harassed or injured while volunteering. When regular workers are injured on the job, they are covered by worker’s comp which limits how much someone working on a job can be paid for an injury. Not all volunteers are covered by worker’s comp insurance though, so if a volunteer is injured, liability to the company could be much greater. Conversely, in a volunteer messes up an hurts someone, they lack legal protections the employees have and they, instead of the con organizers, might be help personally liable for what happen. Volunteers also aren’t covered by legal protection from harassment and discrimination such as Title VII of the Civil Rights Act.

So, hypothetically, how can the system be better for con organizers and fans? Well, for con organizers, they should have their lawyers (and if they don’t have a lawyer, shame on them) look at their policies and practices, and carefully consider if some of these volunteers should actually be paid, even just as temporary employees. They should review their insurance and worker’s comp coverage. Volunteers should carefully read things as well.

In the end, we are all fans and want to be able to continue to enjoy the wonderful experiences that are conventions. No one wants to see anyone sued or hurt, which is why it’s important to look at these things now. Con organizers have a great deal of power, and, as we all know: with great power comes great responsibility.

Disclaimer: Nothing in this article is intended as legal advice and should not be relied upon as such. Any and all legal questions should be brought to a lawyer in your state.