Contest! Win a Deluxe Edition of the 50th Anniversary Printing of Madeleine L’Engle’s A Wrinkle in Time! Today Only! | The Mary Sue

Contest! Win a Deluxe Edition of the 50th Anniversary Printing of Madeleine L’Engle’s A Wrinkle in Time! Today Only!

The Time Quartet’s Meg Murray is a brave, prideful, and stubborn female protagonist that I find more and more relatable as I grow older. The series contains some really deep musing on science, religion, family, and the usefulness of love, and then wraps up with time travel and flying unicorns. So, it’s really a perfect storm of tiny nerd girl interests, or at least it was for this formerly tiny nerd girl.

But nerd girls have been falling in love with a A Wrinkle in Time longer than I’ve even been alive, significantly longer, and this week marks the 50th anniversary of the release of A Wrinkle in Time. Macmillan Publishers have given us a copy of the 50th anniversary edition of the book, packed with never before published material to give to one lucky person. Find out how to enter after the jump, and act fast!

But I already own A Wrinkle in Time! You protest. Here’s what’s in the 50th Anniversary Edition that’s not in yours: 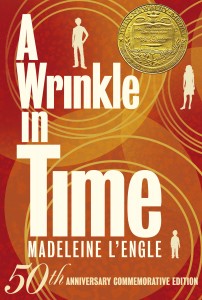 The winner will also receive a $50 VISA gift card!

By now you just want to know how to enter, right? Get on Twitter! (it’s free to sign up if you don’t already have an account) Follow @The_MarySue and tweet exactly this: #WhichWhoWhatsit! I want the 50th Anniversary edition of Madeleine L’Engle’s A Wrinkle In Time! @The_MarySue! http://bit.ly/AnvT57

Just copy and paste the bolded section and you’re good to go, no need to @ reply us, since our handle is already in the text. Tweets missing any of that or with anything else added will be disqualified. ONE lucky winner will get the 50th Anniversary edition of A Wrinkle in Time and a $50 VISA gift card.

You MUST be following us on Twitter to win (because we’ll have to direct message if you win, and if you aren’t following us, we can’t do that) and tweet that message out by Friday, January 27, 2011 at 5 P.M. EST. That’s 5 P.M. today, so tweet quickly! Only one entry is allowed per person. Good luck!

For more information on Madeleine L’Engle and A Wrinkle in Time, check out the anniversary edition’s Facebook page!