A classic case of good intentions and poor execution. 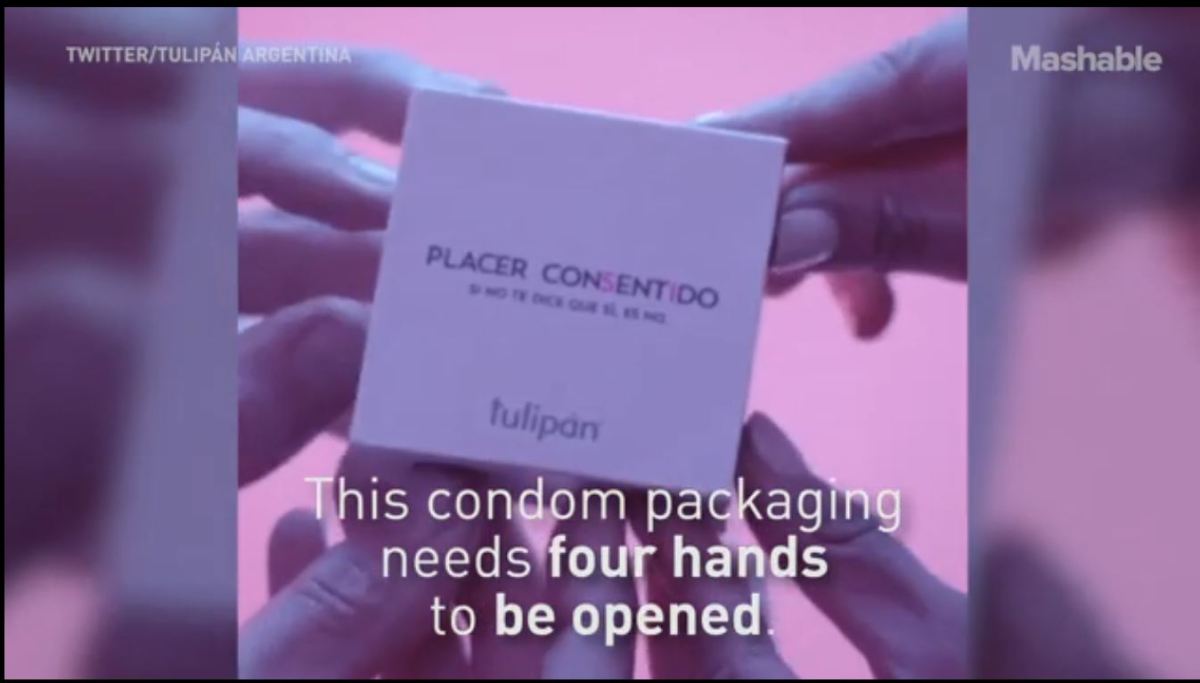 Here’s the thing: sometimes our best intentions go horribly awry. Sometimes things sound better in our head than coming out of our mouth. And some ideas, ideas presumably approved by several professionals in an industry, are just plain bad. One such idea is Tulipán’s Consent Pack of condoms.

The Argentine sex toy company has released a limited edition condom to emphasize the importance of consent and safe sex. The packaging requires four hands to open it, ensuring that both parties are consenting to sexual activity. “Tulipán has always spoken of safe pleasure but for this campaign we understood that we had to talk about the most important thing in every sexual relationship — pleasure is possible only if you both give your consent,” says Joaquin Campins of BBDO, the ad agency promoting the condoms. Ah yes, just what the world has been clamoring for: condoms that are harder to unwrap!

Ever since the rise of the #MeToo Movement, the cultural conversation has focused on issues of consent. And that’s a great thing: understanding and respecting consent is a cornerstone of good sex education. And it’s quite simple really: when engaging in any sort of sexual contact, the absence of an enthusiastic “yes!” is a hard no. Many terrific articles have been written and videos have been made regarding consent, with one of the best being “Tea Consent”:

However, these consent condoms will not stop sexual assault. Chances are that rapists and abusers won’t be held back from a difficult-to-open condom box. For that matter, the box presents a challenge for disabled couples and people without the dexterity to press all eight unlocking buttons. As someone who is frequently stymied by child-proof Tylenol bottles, this condom sounds like a goddamn nightmare.

Furthermore, the consent condoms imply that once a condom is out, consent is sealed, which is not the case. Consent is constantly fluid, and participants can change their mind at any point during the encounter, even after the condom has been unwrapped.

And most importantly, condoms are already facing an uphill battle. Many folks don’t like using them because it changes the sensation of sex (to which I say, you’re using the wrong condoms, but that’s an article for another day). People also can get swept up in the heat of the moment and forget or ignore the need for condoms. Making a condom harder to open won’t exactly help with that.

Ensuring consent during sex is always a good idea, and clearly Tulipán was doing this for the right reasons. In fact, the idea came after a study from AHF Argentina found that only 14.5 percent of Argentinian men regularly used a condom. Yikes.

If we want to emphasize consent, this isn’t the way to do it. Comprehensive sex education, starting in school, is going to be the thing that truly changes our perceptions of sex. In the meantime, can someone open this bottle of Tylenol for me?

(via The Independent, image: screencap/Mashable)