Comics, Fairy Tales, and Female Agency: How Does Sleeping Beauty Stack Up Against Scarlet Witch? 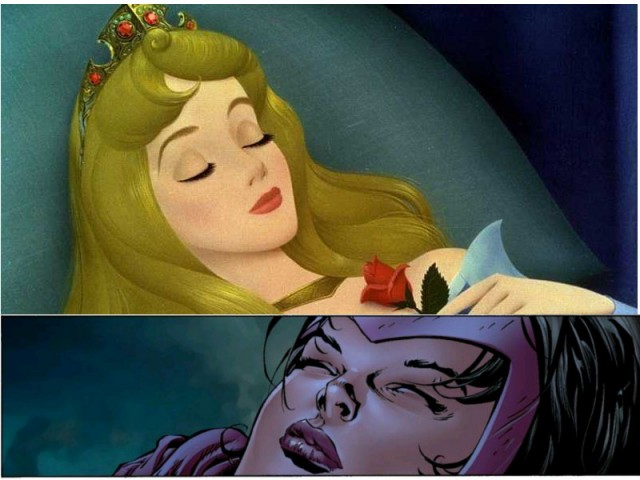 The saying goes, “there’s nothing new under the sun,” and our Western storytelling traditions are no exception. From fairy tales to comics, certain types of narratives have endured: the guy gets the girl, the bad guy gets defeated, all that noise. These stories are a reflection of the time and society they’re written in, so we expect certain aspects of these narratives to evolve with our society. Comics, as our modern fairy tales, have brought us anti-heroes, villains with real motivations you can (kind of) understand, and more diverse characters in general. But what about female characters? As fixtures in both fairy tales and iconic comic storylines, surely they’ve evolved, too?

The female protagonists of well-known fairy tales are clearly a product of their time, and as a result, aren’t exactly paragons of female agency. They’re typically the object of the story, the thing that is acted upon by such characters as villains (of any gender); parents step- and biological; and princes/paupers. Modern retellings (i.e. Disney) have attempted to sidestep this treatment, but it’s still crept into the narratives in one form or another; from Megara being used as a device to ensnare and weaken Hercules, to Esmeralda as the perpetual object of desire for like, everyone, and Belle being every man’s motivation for doing anything at all.

The role of women as comic book characters has evolved over time from being the one female member of the team to … being one of maybe two women on the team (see the All-New, All-Different Avengers and Teen Titans for reference). Luckily, more female characters have gotten solo titles and the X-Men, A-Force, and Rat Queens, among others, have made strides for representation. Comics have long been a storytelling form in which women are barely represented—however, when most female characters possess some sort of superpower and actively affect the story, these women MUST have their own agency, right?

The parallels between Western fairy tales and comic book storylines that feature women are pretty striking. In both, the characters are made victims in some capacity (see Snow White, Cinderella, Rapunzel, Jean Grey, Captain Marvel, Mockingbird, the list goes on). And while some fairy tale women do claim some agency (Gretel pushing the witch into the oven, Snow White making her stepmother dance in red-hot shoes), time and changes in our society would dictate that the comic book characters must. While the broad definition of agency is someone having the capacity to act on their own accord, factors being examined include:

To figure out whether female agency in Western storytelling media has increased over time, I’ll be comparing the actions of a woman in a fairy tale (Sleeping Beauty) to a woman in an iconic comic book storyline (Scarlet Witch in the House of M). This comparison was chosen based on some narrative similarities between the two stories.

Sleeping Beauty in the House of M

In the Brothers Grimm’s Sleeping Beauty, Briar Rose is a vulnerable princess living under the threat of death once she comes of age. Aware of this threat, her parents shelter her, watching her like a hawk to prevent her death. The inevitable happens, and her actions lead to widespread effects in her community, as everyone falls into a deep sleep until her rescuer shows up and breaks the curse.

Fast forward several hundred years, and Scarlet Witch is being sheltered and protected by her father Magneto and brother Quicksilver after suffering a nervous breakdown and killing several of her Avengers teammates. She is watched like a hawk due to her precarious mental state and ability to affect reality. The inevitable happens, and her actions lead to widespread effects in her community, producing an alternate reality and ultimately depowering over 90% of the mutant population.

Briar Rose is given very little choice, and all choice she might have had was co-opted by her parents. Her parents’ choice to exclude a fairy from her christening led to her being cursed, which winds up ruling her entire life. She does make the choice to wander around the castle – this choice ultimately dooms her.

On the other hand, Scarlet Witch is given a few choices. After discovering that Agatha Harkness erased her children and mind-wiped her, she makes the choice to take her revenge on her Avengers teammates. However, due to her mental state she didn’t know what she was doing, so it’s questionable that this was an overt choice of hers. Thereafter, she decides to create the House of M alternate reality to “make everyone happy” at the behest of her brother Quicksilver. This choice is made as a result of his coercion. Her final choice to depower all mutants is the only one that is truly hers.

Briar Rose is not in control of any aspect of her life. She may not even have been in control when she decided to wander the castle, as temptation from the fairy that cursed could have factored into the decision (if we go with Disney’s version). Her parents’ control over her was so complete that their absence from the castle led to her pricking her finger. And her awakening was not effected by her, but a prince and a hunting party that happened upon the castle.

The central narrative in the House of M storyline is how Scarlet Witch is unable to control her powers, and is in fact being controlled by them. This even plays out with other characters; Magneto, Quicksilver, Xavier, and Doctor Strange all attempt to control her through suggestion, coercion, mind control, and magic. She didn’t even control the situation in which her Avengers teammates were murder, being out of her mind with her breakdown at the time.

What little agency Briar Rose may have had in deciding to wander the castle, she ended up being punished for by pricking her finger.

The question of punishment in House of M is a trickier one. Scarlet Witch is blamed for killing her Avengers teammates, and the remaining Avengers and X-Men debate killing her to stop the threat she poses. This “final solution” is the ultimate in punishment; however, you could argue that having to live with the idea that she killed Scott Lang, Hawkeye, and her husband The Vision would be punishment enough.

Briar Rose doesn’t DO anything. Period. Agency score of null.

Scarlet Witch is acted upon by so many people and factors. When she finally shows some agency, she ends up living in exile to escape her actions. Woman’s agency score: not great, but an improvement on absolutely none.

How Western Storytelling Traditions Have Changed

In the almost 150 years between the publication of Sleeping Beauty and House of M, some things have endured. Female characters are still victims and objects to be acted upon. Even though audiences of today expect some more agency from women than they did all those years ago, writers tend to introduce that agency in the third act. Whether it involves Scarlet Witch depowering 90% of the mutant population, Jean Grey sacrificing herself to kill the Phoenix Force, Mockingbird allowing Phantom Rider to fall to his death, or Ms. Marvel/Binary blasting away from the X-Mansion after Xavier invited her attacker in with open arms, these acts of female agency happened at the very last minute.

Thankfully, the entire story arcs of women in comic books don’t involve them being repeatedly victimized (unless you’re an unpowered girlfriend or relative, I guess), or we’d all have something to say about that. Still, we need to be questioning why iconic, memorable storylines that feature women are always the ones where they don’t develop agency until the end.

Eugenia works as an online product manager for an academic publishing company. Her background is in cognitive science, specifically in a field called psychophysics where she studied human motor learning. She is also a bellydancer. You can follow her thoughts on art, science, and being really busy at https://personwhodoesathing.wordpress.com/.