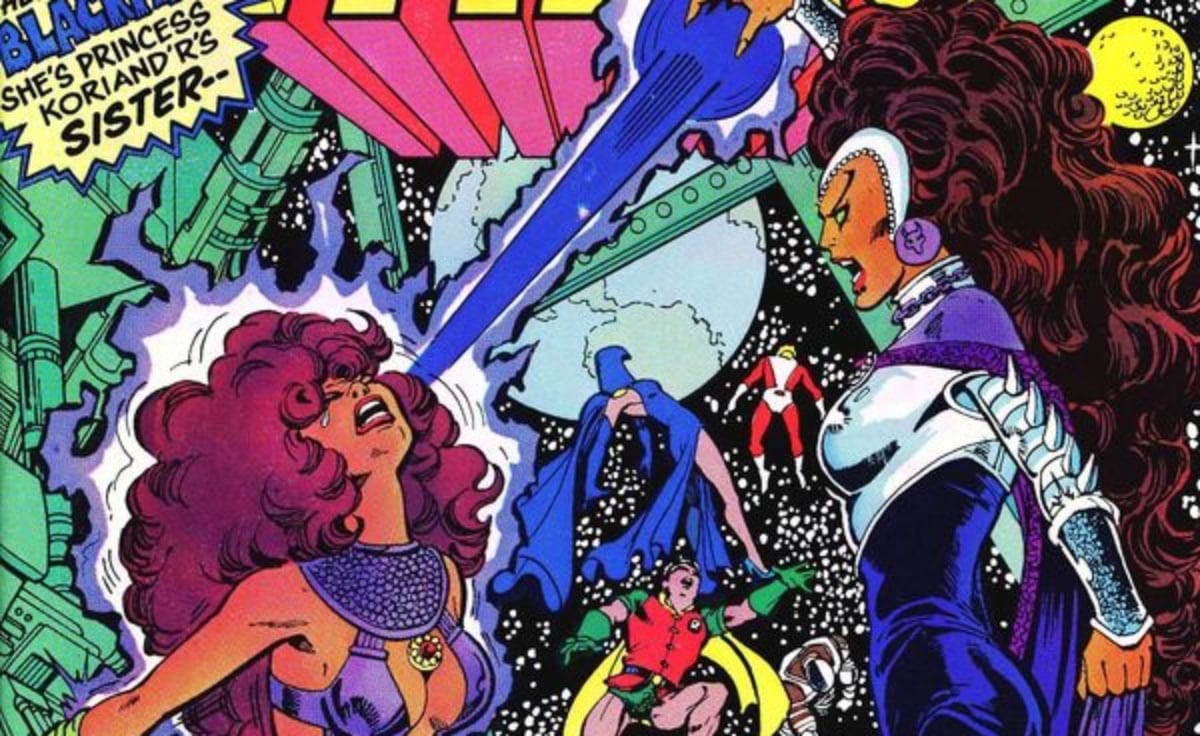 In the upcoming season of DC’s Titans on HBO Max, we will see a clash between alien sisters. The pair, Starfire and Blackfire, have been fighting for years in the comics, but why is that? Well, let’s take a look.

Blackfire, a.k.a. Komand’r, is the older sister of our beloved Tamaran princess Starfire, a.k.a. Koriand’r. She was created by Marv Wolfman and George Pérez, which is already a good sign of quality.

In-universe, Blackfire was the first Tamaran princess born in over a century, which would have and should have been an amazing deal. Except, the Citadel Empire attacked and destroyed the western Tamaranean city of Kysarr and killed three thousand citizens in her name. Ask the Romanovs: a massacre always puts a bummer on the day, even if you had nothing to do with it.

So rather than being a beloved princess, young Blackfire was linked to this disaster. In addition to that, she was a sickly child, and in usual ableist writing fashion, that made her have a grim disposition that the rest of Tamaran found to be a bummer. Her childhood illness also made her unable to harness ultraviolet light into energy to fly. As a result of this, she was denied her birthright to be the next Crown Princess of Tamaran, because no one wanted a goth kid to be their queen.

Everything she had through being the first born heir was transferred to her younger sister, Princess Koriand’r.

Ahh, smells like a glorious war of sibling rivalry.

Like a meal in a slow cooker, Blackfire’s rage grew and simmered over the years until she learned to hate everyone, including her sister who, just due to being born, was always going to be her competition. During a warrior training she tried to kill her sister, but got caught and was exiled. She swore revenge and joined the Citadel, the same one who killed in her name during her birth day, quickly rising through their ranks to become a warrior-maiden.

Eventually, she betrayed Tamaran and conquered the planet with the Citadel. She had her sister enslaved and tortured, with plans to execute her, when they were both captured by the Psions.

Psions are an alien race of sadistic scientists, which is never good, who performed experiments on both of the sisters to see just how much ultraviolet energy their bodies could absorb before exploding from the overload. Gross. Instead of dying, before they could pop like that guy in Under the Skin, Starfire escaped using the star bolts she had developed due to the experiments—star bolts that Blackfire also developed.

Despite the fact that Starfire helped save her sister, Blackfire still tried to kill her once they were both freed. Starfire then escaped to Earth and became a Teen Titan.

Over the years, Blackfire has shown up to be a hater and torment her younger, prettier sister, and while I was first introduced to her through Teen Titans the cartoon, I’ve always had a soft spot for Blackfire.

In Titans, where she is played by Damaris Lewis, we know that Blackfire has murdered the court and taken over Tamaran. Now she is going to try to kill her sister for not being the nice one, and I’m excited to see this epic showdown between two alien queens.