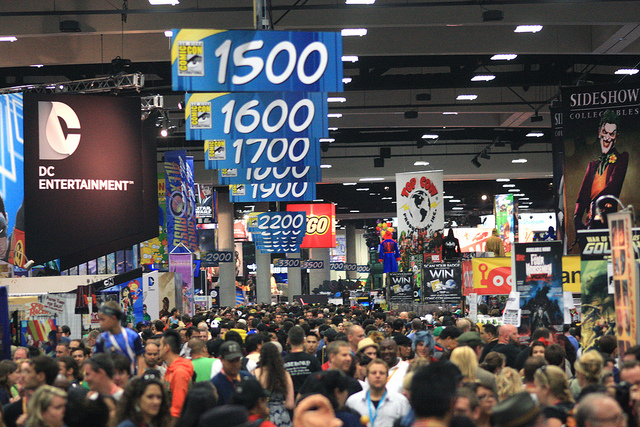 [Editor’s Note: The previous title of this story was “What We Know About The Comic-Con Cosplay Assault, And How To Help.” The story was updated with new information below, police now say there was no assault. We’ve since altered the title for clarification on the matter.]

By now most members of the Comic-Con and cosplay community are likely aware that early Sunday morning a female cosplayer was found unconscious at the 333 West Harbor Drive Marriott Marquis and Marina hotel with skull and eye socket fractures, cerebral hemorrhaging, and numerous other injuries. It was the girl’s first visit to Con, and her seventeenth birthday.

Following the attack, concerned members of the cosplay community took to social media to urge SDCC attendees who might have any details on what happened to come forward (if you haven’t seen images of the girl’s Roger Rabbit cosplay that have been shared by concerned Tumblr and Twitter users, NBC San Diego has pictures that also maintain the underage victim’s anonymity). Despite Reddit comments yesterday stating that the Harbor Police were “investigating the possibility that this is a hoax,” Comic Book Resources reported that the Police have released the following statement:

Harbor Police arrested a 29-year-old man early Sunday morning, July 27th in a hotel at 333 West Harbor Drive. He was booked into San Diego County Jail at 11:20 am on charges of sexual contact with a minor and contributing to the delinquency of minor. The victim, a juvenile female, was transported to a hospital for evaluation and treatment. The Harbor Police Investigations Unit is handling the incident. This investigation is ongoing.

The man in question is 29-year old Justin Kalior. Kalior runs the Youtube and Facebook page Project Cosplay and spoke to Polygon about the incident, saying that he is friends with the girl and agreed to drive her to SDCC, and that he spent the day taking pictures of attendees. Kalior denied giving his traveling companion alcohol or having sex with her, saying the two got into an argument around midnight in the Marriott’s lobby:

I just wanted to call it a night and take her home to her parents and be on my way […] She ran off and I didn’t follow. She didn’t answer the phone. She was gone for so long I asked security if they had seen her.

According to Kalior’s conversation with Polygon, he was with security an hour later when the girl was discovered unconscious and bloodied in the pool area of the hotel. When police arrived they “searched her purse” and “it [her I.D.] stated she was 17,” says Kalior, who claims he believed she was 20.The victim was taken to the ICU and Kalior was arrested at the scene but later released on bond. Aside from speaking with Polygon, Kalior has also made statements on his Project Cosplay Facebook, writing yesterday morning that he wouldn’t be posting shots from SDCC because a “close friend” was “assaulted and left in critical condition at the convention.”

This has been a few very hard days for me […] I wasn’t there for her when this happened and I regret every second. I just hope that she pulls through this with a safe and fast recovery, please pray for her.

NBC San Diego reports that police say “there may be other suspects.”

The victim’s mother has also been posting updates using Facebook, saying that Tuesday was “A better day … each day she is getting better … very grateful.” Polygon also reached out to the girl’s mother, who declined to comment on the situation specifically, but “she did want to talk in the future about the support the cosplayer community gave her family.”

It’s just so sad, that on her birthday she had one of the most horrific things happen to her.

Somebody knows something and they’re just not saying it. I just want them to come forward.

Be brave […] I’m just hoping we can find who did this and make sure this doesn’t happen to anyone else because no one else should have to go through this.

According to NBC, Harbor Police would like to talk with anyone who saw the teen or Kalior at the Mariott between 11 p.m. Saturday and 2 a.m. Sunday. We spoke to a Harbor Police Sergeant who asks that anyone with information reach out by e-mailing [email protected]

Along with the cosplay community’s support and gratitude for the victim’s evident progress (NBC reports that she’s regained consciousness after suffering several brain bleeds, but that her “memory is fuzzy about what happened” and recovery will be a long process), it’s clear from SDCC’s Reddit post on the attack that many feel the assault is a heartbreaking example of the wide-scale harassment found at cons. Last week we wrote about a survey conducted on cons by former Mary Sue writer Janelle Asselin. Asselin’s findings are particularly, heartbreakingly relevant here:

Thirteen percent [of all respondents] reported having unwanted comments of a sexual nature made about them at conventions—and eight percent of people of all genders reported they had been groped, assaulted, or raped at a comic convention.

Our thoughts go out to the girl, her family, and everyone in the community impacted by this and similar incidents.

A Harbor Police investigation found that the girl’s injuries “were not the result of a criminal assault, and were likely the result of a fall. Her injuries, and physical evidence at the scene, were consistent with a fall from the distance of approximately six feet.”

More on this story as it develops.