In space, no-one can hear you impregnate a planet. 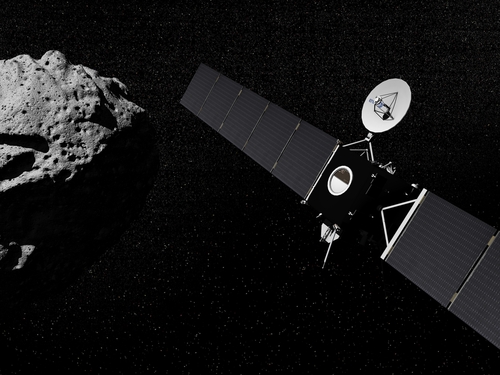 Researchers at the University of Bern recently published a study which revealed that prebiotic chemicals, glycerine and phosphorus, were discovered in the Churyumov-Gerasimenko comet. While it might not sound like a sexy result, this study is actually evidence of panspermia: the theory that life was transferred to Earth through objects like asteroids, meteoroids, and comets.

Researchers began performing full mass spectrums on Churyumov-Gerasimenko in August 2014 using the ROSINA (Rosetta Orbiter Spectrometer for Ion and Neutral Analysis), which is aboard the spacecraft Rosetta. Rosetta is a European Space Agency mission, with assistance from NASA, which was launched in March 2004.

Although ROSINA has already taken over a thousand full mass spectrum samples, this study focused on about fifty of them, mostly taken in February and March 2015 and then later in the year in June and July. This date range and small sample size might seem odd, but there are several reasons why. For one, comets change over the course of their orbit, and have different tails (made up of either dust or gases) that vary based on how close they are to the Sun. Moreover, comets sometimes have jets, which are when unusual gas breaks out from the core. And while ROSINA took many samples, it was not always properly oriented for mass spectrum analysis, often to allow other instruments on Rosetta to make measurements.

Glycerine is an interesting find because of its organic uses. Among other things, it is found in fat and is a necessary part of any lifeform’s metabolism process. Additionally, it also has a long list of other, nonorganic uses, like in explosives and as medicine. When I asked chemist Kristen Burke for her expert opinion, she commented that because it appeared researchers were only “able to detect glycine during times when it was heated up enough to gas off from the comet,” she thought it might be possible that there were “larger, less volatile compounds stuck inside” the comet, especially since “the instrumentation used [in this study] is less sensitive to larger molecules.”

The high levels of phosphorus might also point to panspermia. Burke said that she was interested in the phosphorus that the researchers found “because it’s such an important element in so many biological molecules [like] DNA, RNA, ATP, [and] cell membranes made of phospholipids.”

There are actually a few different panspermia theories. Some believe that extremophiles (organisms that can survive in harsh conditions, like at high temperatures or without oxygen) could have survived a trip through space and served as the first life on Earth. Conversely, “soft” panspermia theorizes that essential chemicals for life, but not life itself, were transferred to Earth. “Directed” panspermia is the theory that life was intentionally transmitted to Earth by intelligent life. While this study does not prove any theories of panspermia beyond a shadow of a doubt, it does provide more evidence and confirm an earlier study with similar findings. “The fact that so many amino acids and complex molecules can travel intact through space has implications for the formation of life on earth,” astrophysicist Jamie Overbeek told me. “Astrobiologists have a picture for how the first, simplest life, so simple that the term ‘life’ is debatable, might have formed from a series of reactions involving combinations of these basic building blocks.”

Panspermia has long fascinated scientists and science fiction enthusiasts alike. A variety of scientists, including Enrico Fermi and Francis Crick, have written scientific papers speculating on panspermia.  The X-Files episode “Biogenesis” features Mulder and Scully investigating the murders of two scientists who were researching panspermia.  Jupiter Ascending alludes to directed panspermia, while Jack Finney’s novel The Body Snatchers, the film Invasion of the Body Snatchers, The Andromedia Strain, Stephen King’s “Weeds,” and the film Prometheus all discuss panspermia in some way. Even Carl Sagan’s novel Contact mentions it.

Even though this study is over, the ESA is still working with the Rosetta team to gather other kinds of data. Earlier this month, Rosetta struggled to orient itself, so the ESA lost contact with the spacecraft for about a day. This September, Rosetta will try to crash-land on Churyumov-Gerasimenko, ending its mission. “Hopefully Rosetta will be able to gather more data during its planned final descent towards the comet,” Overbeek says.

And even after Rosetta has finished its mission, there is still plenty of research left to do. The detection of glycerine and phosphorus gives scientists good reason to look closer. Burke suggests that it might be wise to look closer at the phosphorus in comets and try to identify its source. “More data is always the next step,” she says, but when it comes to the phosphorus, she wants to know if “it [is] being bound up in some larger organic compound.” Dr. Matt Taylor, who works on the Rosetta mission, has already suggested that a possible follow-up mission could make similar observations on an asteroid.

In addition to both of these ideas, Overbeek suggests that discovering the origin of life will include gathering data from a variety of sources. “Astronomy yields a chronological reverse understanding of the universe; we began with small telescopes and probes that allowed scientists to capture small amounts of light or nearby particle samples to understand our recent past,” Overbeek explains. “In the future, as telescopes grow larger and technology for space missions improves, we will be able [to] ‘see’ further into the universe and uncover more of our past.”