How Do We Call out Colorism Without Calling out Blackness? | The Mary Sue

How Do We Call Out Colorism Without Calling Out Blackness? 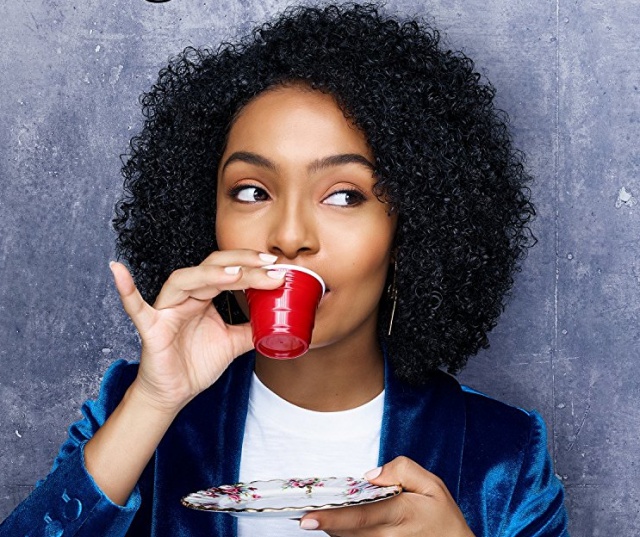 If you are unfamiliar with the ABC television show black-ish, then you are missing out. Since its second season (the first season was good, but season two is much better), black-ish has been the biggest black family show in television. It’s filling the void left behind by The Cosby Show in terms of representing a black idyllic image of a family that, in the words of Drake, “started at the bottom, now we here.” Like its spiritual predecessor, black-ish is getting a spinoff, on sister channel Freeform, called grown-ish, about eldest daughter Zoe (Yara Shahidi) going off to college ala A Different World.

I, for one, am very excited about this, because as someone who never grew up with reverence for The Cosby Show or A Different World, and even though I’m out of my college years, I appreciate a show about a young black girl going to college in today’s society. College was the place I began to understand the nuances of my blackness, so I’m excited to see what the show tackles—and how it can also just be a fun show. Dear White People was awesome, but it was also about something very, very political and while that’s important, I want to have a black show that doesn’t have to be about just that. I’ve gotten to go to college with a lot of white characters that I love, but I’m excited to go with a black one again for the first time in a while.

Earlier today on Twitter, grown-ish‘s lead actress, Yara Shahidi addressed something very important after someone tweeted that they wouldn’t be watching the show because “how is it that a spinoff only occurs when the oldest daughter is racially ambiguous?” To which Shahidi replied:

It is a-okay to not watch the show… but on the basis of my “racial ambiguity”? that neglects the fact that I am perceived as a young black girl in most any space I occupy https://t.co/THWiAKHhy4

Now, we can have a separate conversation on the ever present colorism and the monolithic black aesthetic on TV of 3c hair and lighter skin…

Now, I think it is important to unpack this issue, because when we talk about “black representation,” that’s a broad issue that’s not just about getting black people on screen, but also recognizing the range of blackness that exists within the black community—different sizes and skin tones.

When I first saw the posters on my subway for black-ish, I’m not gonna lie. I rolled my eyes a lot. I remember thinking very clearly  “look at this lovely light-skinned family.” 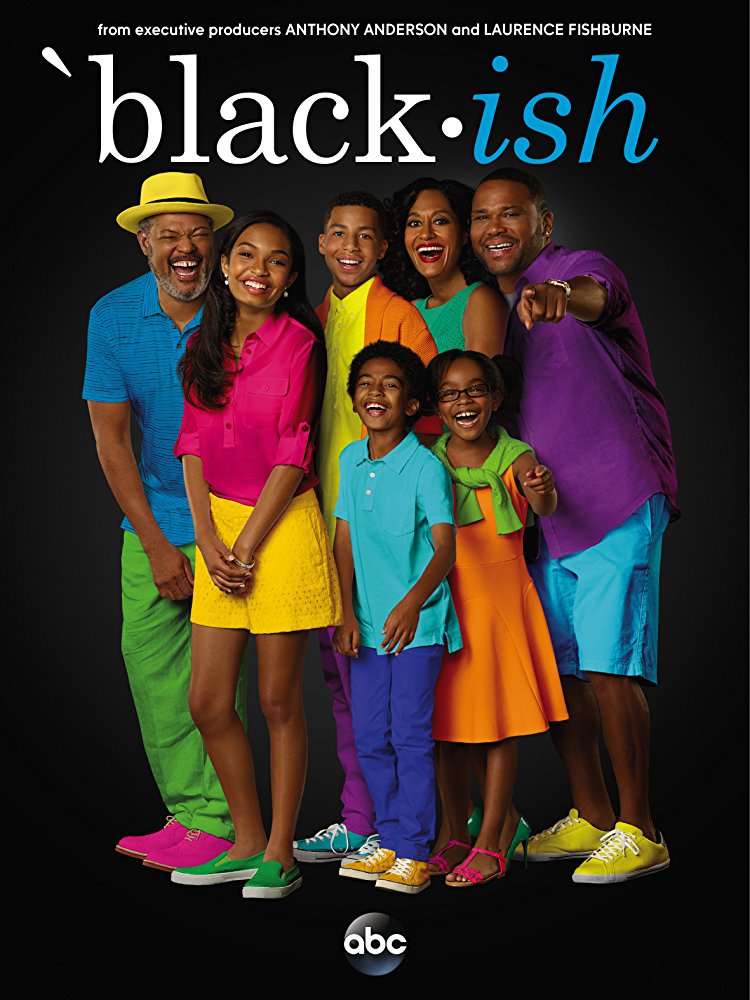 Come play with us …

This poster is probably the worst thing about the show because it is such a “we are a totally safe black family” poster that totally misrepresents what the show is, at least to me. And it also does, in my opinion, make everyone look much lighter than they actually are in the show. Look how “tamed” Rainbow’s hair is in this picture, in those soft WASP waves, not to mention that permed, straight hair look on Yara Shahidi that she doesn’t wear often on the show. Thankfully, the later promo posters have pulled away from that. 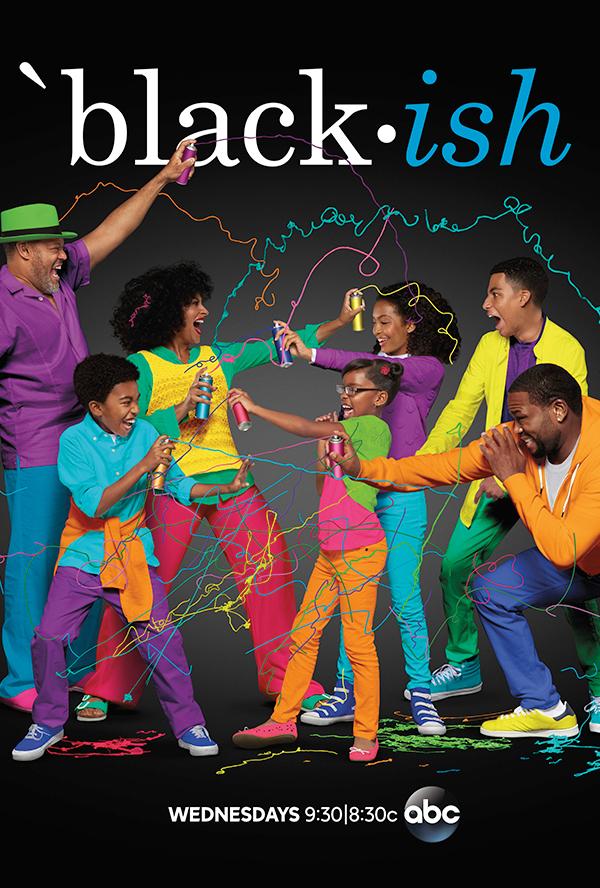 In our society, lighter skin, straighter hair, and less African features have historically been seen as more acceptable and as indicators of beauty and intelligence both inside and outside of the black community. Phrases like “you’re pretty for a dark-skinned girl,” “you’d be so pretty if you’d straighten your hair,” and joking about a dark-skinned person looking “burnt” are things every dark-skinned black woman has heard at some point in time or another, in some way or another.

So when I saw this new family comedy coming out about a successful black family in California, with that first poster, I was excited but also disappointed that of course all the of leads appeared to be medium- to light-toned with perms or “good” hair. And that doesn’t make them less black, but it makes them more acceptable to a larger audience.

Which isn’t the fault of the cast or Yara Shahidi. Yara Shahidi is black and Iranian, no one would look at her and think she’s not black or a woman of color. Nas is her cousin for goodness sake. She’s a young celebrity I’ve come to respect and admire; I wish I was that cool at 17. Shahidi has also been outspoken about race, gender, and colorism in the past, using her platform, and I can only hope and expect that her show will deal with that issue because it is always an issue when you exist within a group of black friends (also, Dear White People touched on that perfectly). Her blackness should not be called into question or dismissed because she has a certain hair texture of certain features—especially because non-black society is never going to ask her for some ethnic breakdown.

However, we need to be able to have the conversation about why it happens. Why is it that Black Panther is the first mainstream movie I’ve ever seen with so many dark-skinned women in leading roles, where it isn’t specifically a “black movie”? Even Dear White People’s lead character, the one you see on all the posters being the revolutionary leader, is the mixed-race black female character. The biggest black female celebrities are lighter-skinned women. Lupita Nyong’o is great, but that’s one, and are you seeing her cast in romantic comedies?

I think what makes this conversation so fraught is that, to lighter-skinned black women, this sounds like a rejection of them, their blackness, and their experiences as black women. Of course, light-skinned black women face discrimination, but it’s not the same type of discrimination as darker-skinned women. Darker-skinned women have a harder time being the face of a franchise, being the love interest, being the cool-earth black chic in a mainstream series than lighter skinned women. The last time I had that kind of dark-skinned black female character that I could enjoy and relate to on a teen drama was Angela Moore from Boy Meets World, and that stupid spin-off took that away from me (forever bitter). 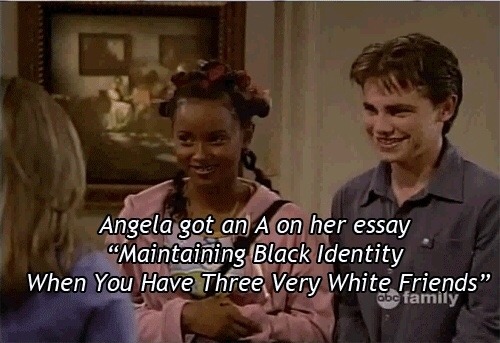 Just like with anything else, it is uncomfortable to be perceived as having a leg up on an already fixed race against you. No one wants to hear that, even though they’ve been playing the game on hard mode, there is still a higher level that is slightly worse.

Last year, HuffPo had an article called “Is The Face Of Young Black Feminism Light Skinned And Biracial?” in which writer Abi Ishola talked about how actresses Amandla Stenberg, Willow Smith, and Zendaya Coleman have all been called the future of black feminism, while other, darker-skinned black actresses are left out. This is not new. There is a reason that Rosa Parks was chosen to be the face of the bus boycott and not Claudette Colvin: respectability.

Son of Baldwin spoke on this on Medium, when he brought up that Essence cover picture depicting a black family with the black men being darker than the women in the family.

This cover is beautiful, but why are black women almost always depicted lighter than black men? Why can’t black women be the darkest? pic.twitter.com/PsvdrjyWVc

My mother is the darkest person in my family, and because she has always been such a loving and beautiful part of my life, it made me aware of things that she went through. She would tell me that when I was a baby, people would think she was my nanny, because I was so much lighter than she was. Playful jokes about her skin tone from people bother me to my core, because it is always (and I mean always) rooted in some mammy colorism bullshit.

Once you see it, you never unsee it, and it has made me, even with my lighter skin, deeply aware that we have to never let our experiences, as hard as it may be, stop us from understanding how someone else’s can be worse.

We have to acknowledge how women like Jessica Williams and KeKe Palmer are neglected. I mean, KeKe Palmer came out as gender-fluid, and you don’t see that talked about at all. We have to acknowledge how it took Issa Rae making her own damn show to get recognized. How Franchesca Ramsey has been preaching truths for years but doesn’t always get the same platform despite her impressive as hell resume. Gabrielle Union has been working in film and television since 1993 but only got her first lead television show job in 2013!

When I was about ten years old, I had finally given up on asking my mom to perm my hair (she refused), and I remember taking a pair of scissors and cutting my hair slowly. I was hoping that if I just cut it short enough, it would just lay straight. That I could cut my hair into the curls I wanted instead what I had. I was tired of people telling me that I would be pretty if I straightened my hair. Hell, I hate that now, at 25 with dreads, I still wonder if I would be prettier if I straightened my hair.

Thankfully, I’m an adult, and I have gained enough natural hair role models in my life that I no longer have as many complexes as I once did about black beauty. But that never stops me from being aware. Being aware that when I look at black women on television while things are changing in some ways, other things stay very much the same in terms of who gets to be on TA and what they’re allowed to look like.

So as Yara says in that second tweet, let’s have that second conversation about skin tone and complexion, without tearing down other people’s blackness, but by tearing down the industry that profits off those issues. Also, to those lighter-skinned actresses in the business: If you have the power and the pull, push to hire dark women on your shows.