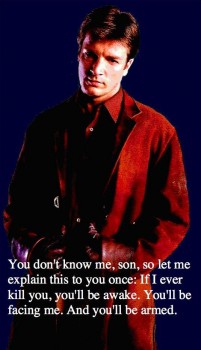 Have you ever heard of free speech? It’s that thing that would allow you to put up a poster of, oh I don’t know, your favorite sci-fi character accompanied by a particular quote he once said that you quite enjoy. You’d certainly be allowed to put up that kind of poster, right? Well, University of Wisconsin-Stout theater professor James Miller wasn’t allowed to put up the poster of Captain Malcom Reynolds accompanied by a particular quote he fancied (seen to the left), and was actually threatened with criminal charges by the campus police because of the poster and quote.

UWS Chief of Police Lisa Walter noticed the initial Firefly poster, took it down, and left Miller an email over the weekend stating, “it is unacceptable to have postings such as this that refer to killing.” Miller responded by telling Walter to respect liberty and to respect his first amendment rights. Walter responded to that by claiming that the poster can be interpreted as a threat by others, or could make people who view the poster believe that Miller could carry out a threat similar to the one in the quote. Walter then informed Miller than if he chose to repost the poster, he could face charges of disorderly conduct.

When campus police first censored the Firefly poster in question, Miller responded by posting a new poster that read “Warning: Facism,” along with the image of a police officer striking a civilian. This poster, obviously, was also censored.

While schools tend to be extra careful when it comes to any type of anything, and one can’t really blame them for doing so, it is a little funny that the quote in question is actually one with a meaning of not condoning killing, though that meaning was lost on UWS campus police. Depressingly, this is just another instance of people not understanding Firefly and removing it from public view.