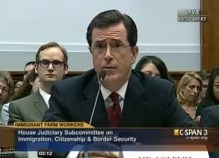 In case you missed it: Comedy Central’s Stephen Colbert (host of The Colbert Report) testified this morning before the House Judiciary Committee’s Subcommittee on Immigration, Citizenship, Refugees, Border Security, and International Law.

The appearance almost didn’t happen—at least, it wouldn’t have if Colbert had followed the direction of Rep. John Conyers, (D-MI), chairman of the Judiciary Committee. Conyers asked that Colbert leave so that the Committe could “get to the bottom” of the issue.

Mediaite has videos of Colbert’s testimony, including the now-immortal “cornpacker” line, and further coverage.