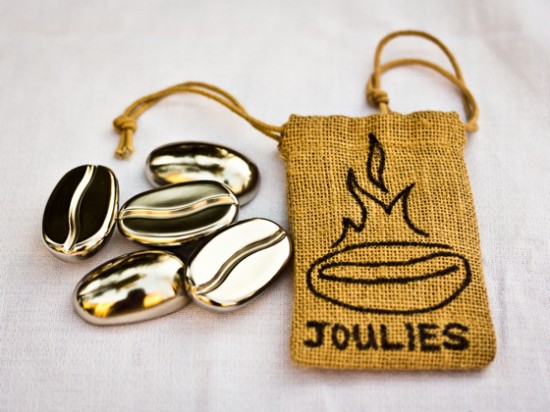 When Wired wrote that feature this month about the weird and wonderful projects made possible by Kickstarter, Coffee Joulies were exactly what they were talking about. We have yet to test them and so we withhold our judgment, but it seems quite possible that in Coffee Joulies, creators Dave Petrillo and Dave Jackson have solved a problem that has vext man since time immemorial: How to keep the temperature on that cup of coffee just right.

To that end, the two Daves cleverly exploit a basic physical principle, that of phase change. When a solid becomes a liquid, it sucks in a lot of energy to do so, thereby cooling the area around it (think of ice melting); likewise, when a liquid solidifies, it releases heat energy. What does this have to do with coffee? At the heart of the stainless steel Joulie rests a non-toxic material with a melting temperature of 140 degrees Fahrenheit. (Don’t worry, the creators assure us it’s sealed in tight.) When the coffee is above 140 degrees, the material melts, thus rapidly cooling the coffee around it until it hits about 140. When the coffee chills below 140 degrees, however, the material solidifies, thus warming the surrounding coffee.

According to the Daves, Coffee Joulies cause coffee to cool down to drinkable temperatures three times as fast, and stay warm twice as long. Combine them with the vacuum-sealed might of a thermos, however, and they could keep coffee at just the right temperature for as long as five hours.

With 31 days to go, Coffee Joulies have already crushed their fundraising targets, raising more than $28,000 versus the original asking amount of $9,500. We’re guessing that in addition to contributing to humanity, this has something to do with the incentives they’re giving donors. Check out the Kickstarter page for more info.