Today’s Google Doodle Is an Adorable Coding Lesson for Kids 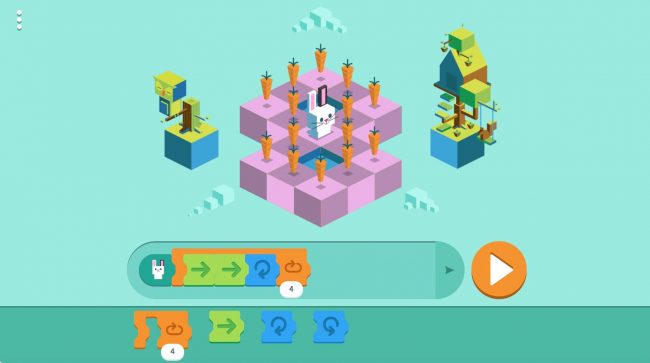 Computer science can sometimes seems like an intimidating and difficult subject, but that’s nothing a rabbit-themed game can’t fix.

In honor of Computer Science Education Week, today’s Google Doodle celebrates 40 years since kids programming languages were first introduced to the world. The result is a game “based on the Scratch programming language for kids” where you give a rabbit a sequence of instructions to find carrots. As you advance in levels, the game introduces different actions and the challenge becomes trying to complete each stage in the shortest amount of directions. It’s a real brain-teaser, and will definitely be a distraction for lots of us at work today.

The project was no easy feat, and is the result of collaboration between the Google Doodle team, the Google Blockly team, and researchers from MIT Scratch. Champika Fernando from MIT says:

“My first experience with coding was in a free after-school program back in the eighties when I was nine years old. We programmed a little green turtle to move around and draw lines on a black screen. That programming language was called Logo.”

Fernando hopes that today’s Google Doodle (which is appearing in most countries today) might ignite an interest in coding for kids around the world.

“This week, millions of people around the world can and will have their first experience with coding. It makes me happy to think of all of the nine-year-olds who will get their first coding experience playing with today’s Doodle. My hope is that people will find this first experience appealing and engaging, and they’ll be encouraged to go further. In some ways, it’s very different from my first coding experience many years ago, but I hope it will be just as inspiring and influential for them.”

Google encourages children who enjoyed the Doodle to also try “the new CS First activity built on Scratch where they can create your own Google logo!” How did you do on Coding for Carrots?