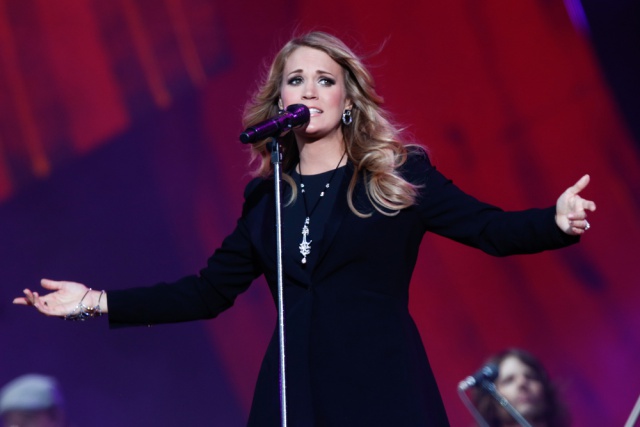 There was a lot of discussion about how the CMAs (Country Music Awards) would tackle gun violence at their show in the wake of the Las Vegas and Texas shootings.

Last Wednesday, the Country Music Association released media “guidelines” for the event that limited reporters from asking questions about “the Las Vegas tragedy, gun rights, political affiliations or topics of the like” or risk having their privileges revoked at the event.

Thankfully, that decision was quickly changed after backlash from both the press and the country stars themselves including Brad Paisley, who was set to co-host the show and Maren Morris who tweeted, “Country music has always been about the truth. Out of respect for the Las Vegas victims, let’s keep it that way.”

Moving tribute from @carrieunderwood and @CountryMusic Association to those lost in Las Vegas on October 1st. Rest in peace…#CMAawards pic.twitter.com/FwhautLfVe

Still, the question was how would the CMAs address the issue, if they did at all. The amazing Carrie Underwood delivered a moving tribute to the victims of Las Vegas singing a rendition of the hymn “Softly and Tenderly” during the in-memoriam which featured black and white pictures of the 58 victims.

Paisley, also honored the victims in the show’s opening monologue and stated:

“The way we see it, the best way to honor our fans is to play our music — loud and proud. Our music lifts people up and that’s what we’re here to do tonight. So this year’s show is dedicated to all of those we’ve lost and to all of those who are still healing. We love you and we will never forget you.” (via Bustle)

That wasn’t the only political thing that happened this year at the CMA, both Underwood and Paisley did a duet making fun of Trump called “Before He Tweets,” a parody of “Before He Cheats” by Underwood with lines like: “In the middle of the night from the privacy of a gold-plated White House toilet seat he writes NFL and covfefe,” and “Til little rocket man starts a nuclear war, maybe next time he’ll think before he tweets.”

Donald Trump is now so broadly unpopular, even the Country Music Awards opened its show tonight by mocking him. That’s supposed to be his wheelhouse. It’s how you know he’s a goner. #CMAawards

Keith Urban also unveiled a new song called “Female” which addresses sexual harassment, which makes sense considering that his wife, Nicole Kidman, along with her close friend and sometimes neighbor Reese Witherspoon, has been outspoken about the issue.

While the event did not touch on gun control (and really we didn’t expect them to), the fact that the CMAs allowed itself to get this political and anti-Trump is a step in the right direction. Country music is one of the biggest and bestselling genres of music and it is filled with some great female artists (Kacey Musgraves, Miranda Lambert, Carrie Underwood, etc) who have been kicking butt and taking names with progressive messages. They are reaching audiences that many other progressive spaces might not be able to, let’s not forget Loretta Lynn brought birth control and domestic violence to country music in her era.

Country music is not and should not assumed to be only something that conservatives listen to. It has a long history of progressive music and musicians so tapping into that can only help.