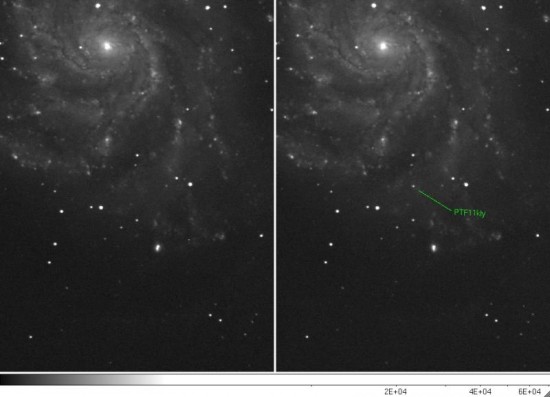 Astronomers have discovered a bright, nearby supernova in the Pinwheel Galaxy, M101, 21 million lightyears away, which happens to be lying in Ursa Major. They say the supernova is the closest of its type discovered in forty years. The astronomers from University of Oxford teamed up with colleagues from the Palomar Transient Factory collaboration and used a robotic telescope to make the discovery of the supernova — a supernova, which, oddly enough, didn’t have any trace of champagne, but was found in the sky, at least.

Dr. Mark Sullivan, Oxford team leader, noted that the discovered supernova is a type 1a supernova, which happens to be the kind of supernova that astronomers use to measure the expansion of the universe. The supernova, named PTF11kly, continues to grow brighter, to the point where it might be visible with binoculars in ten days’ time, with the best possible time to see the bright, exploding star in the sky being “just after evening twilight in the Northern hemisphere in a week or so’s time.”

Science Daily points out that the Palomar Transient Factory scientists have discovered over 1,000 supernovae since they began operation in 2008, though they believe PTF11kly could be the most significant of the supernovae discovered, because its close proximity will provide easier analysis and study.