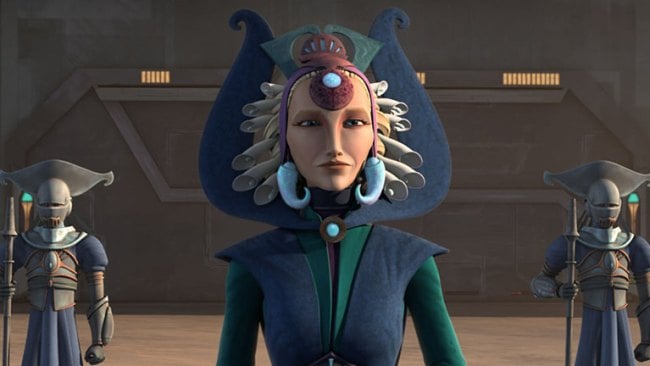 I’ve previously written about the feminist redemption of Padmé Amidala in The Clone Wars, but Padmé isn’t the only female character who makes waves on that dearly departed Star Wars show. Established characters with few or zero lines in the films are given new life on the small screen: Mon Mothma, mother of the Rebel Alliance, as well as Jedi masters Adi Gallia, Aayla Secura, Depa Billaba, Luminara Unduli and Shaak Ti all play key roles in various Clone Wars episodes.

Of the original female characters introduced on the show, Anakin Skywalker’s spunky padawan Ahsoka Tano is the easy favorite, but Satine Kryze, Duchess of Mandalore, is the most intriguing. She is also the key to uniting the three Star Wars film trilogies–biologically, perhaps (#ReyIsAKenobi!), but certainly ideologically.

In a saga all about war (surprise! Check the title), Satine (voiced by Anna Graves) is an avowed pacifist. In fact, the title of the series–Star Wars: The Clone Wars–has the word “war” in the title not once, but twice, and Satine is the reigning duchess of Mandalore, a planet that defines itself as a race of warriors.

Mandalore has a long, proud history of violence, having waged war against the Jedi themselves during the fall of the Old Republic. Jumping ahead a few thousand years, our first introduction to Mandalore occurred in The Empire Strikes Back, when bounty hunter Boba Fett first showed up in specialized Mandalorian armor. So you could say that Duchess Satine’s political stance on war is… an unpopular one, to say the least, both in the Star Wars universe and in ours.

As introduced in the Clone Wars episode “The Mandalore Plot,” Satine is at the forefront of a new Mandalorian regime committed to pacifism. She is also the leader of the Council of Neutral Systems–a conglomeration of 1,500 planetary systems (#girlbossftw)–committed to playing no part in the brutal war between the Grand Republic and the Separatists. At the outset, it is unclear whether Satine’s intentions are righteous or merely self-righteous, and whether her worldview is realistic or misguided. Satine is accused of “tarnish[ing] the very name Mandalorian,” which, as the peaceful leader of a warrior nation, she totally is, tautologically speaking. Additionally, neutrality is not necessarily an ethically admirable option. After all, as the famous Edmund Burke quote goes: “The only thing necessary for the triumph of evil is for good [people] to do nothing.”

Even so, Satine’s political confidence and intellectual vigor make for an admirable and engaging character especially because her view is so unpopular. She possesses a steely conviction, promoting pacifist ideals even though she is targeted for assassination, framed for murder, and betrayed by those closest to her. Even when her voice is silenced by the fierce Mandalorians who oppose her–nevertheless, she persists.

Another fascinating element about Satine’s character is not just her stance on the concepts of war and peace, but how she illuminates the glaring contradictions of the Jedi Order as a whole. And it all comes to light through her fascinating, tumultuous, and ultimately tragic relationship with one Obi-Wan Kenobi.

As Obi-Wan explains to Anakin in the subsequent episode “Voyage of Temptation,” he and Qui-Gon Jinn were tasked with protecting the Duchess on an extended mission to Mandalore when Obi-Wan was still a padawan. Although—as Anakin “I Ship Obitine Harder Than You” Skywalker points out—Obi-Wan clearly had feelings for Satine, the two went their separate ways as soon as Obi-Wan and Qui-Gon’s mission was complete, and the wistful thread of “what if?” looms large for both Obi-Wan and Satine.

Still, it’s exhilarating to watch Obi-Wan and Satine’s latent romantic tension play out before our eyes in the form of ideological debates and blistering banter. Take this exchange from “The Mandalore Plot”:

Obi-Wan: “A peacekeeper belongs on the front lines of conflict, otherwise he wouldn’t be able to do his job.”

Satine: “The work of a peacekeeper is to make sure that conflict does not arise.”

Obi-Wan: “It’s a noble description, not a realistic one.”

Satine: “Is it reality what makes a Jedi abandon his ideals? Or is it simply a response to political convenience?”

Zing! And when Anakin insists to the Duchess that the Jedi “fight for peace,” it’s difficult not to scoff at the blatant contradiction right along with her.

Both Obi-Wan and Satine present compelling points, but Satine puts a finger on the central paradox of the Jedi: They are an organization committed to peace, yet they are defined by their unique weapons. They view themselves as unbiased protectors, but they now serve as commanders and generals in an army committed to vanquishing political insurgency across the galaxy.

Plus, this war between the Republic and the Separatists is really just a facade for the more nefarious evil of the Empire that is to come. The Jedi, puppeted by Palpatine, have aligned themselves against former Jedi Dooku, under orders from Darth Sidious–who is, of course, the same person as Palpatine. If ever there was an argument for violence feeding more violence, Satine Kryze has it in the bag.

Oh, and also, Satine Kryze and Obi-Wan Kenobi really are the most adorable, bombass couple.

One of the most astonishing character moments for Obi-Wan occurs when Satine’s life is threatened and she confesses her love for him. In response, Obi-Wan hedges for a moment and then replies: “Had you said the word, I would have left the Jedi Order.” Which! Is! Crazy! Because Obi-Wan is considered by many, including Anakin, to be the “perfect Jedi,” the staunch, stoic rule-follower whose placid nature contributed in part to his inability to come to terms with the storminess of Anakin’s.

But to take this exchange a step further, it’s notable because it shows just how committed both Obi-Wan and Satine are to their conflicting ideals–and how much each respects the other for their ideological fidelity. The tragedy of Anakin and Padmé’s love is that they both sacrifice too much of their own values to be together, but Obi-Wan and Satine refuse to do so. In a cruel twist, that’s what makes them such a compelling pair.

(As an aside, Satine represents the ultimate fantasy version of my own personal Mary Sue. I’m not a fan of weapons, even the science fiction kind, and I honestly wouldn’t want to run the risk of getting caught in a blaster fight in a cantina just because Han Solo doesn’t pay his debts. But, you know, if the occasion arises where I have to go on a grand adventure rescue mission with my boyfriend Obi-Wan Kenobi, I’m not going to protest too much… )

In the final full season of The Clone Wars, Satine’s plotline is given a controversial ending: she is captured as bait to lure Obi-Wan to Mandalore so that Darth Maul, out on a revenge kick against Master Kenobi, can murder Satine in front of him.

Was this strong, independent female character seriously fridged? Was Satine killed just to further a male character’s emotional arc? I think not, because there’s so much more to her death than its effect on Obi-Wan. (In fact, Clone Wars barely follows up on that thread at all–you’ll have to look to Star Wars fanfic for some Obi!Angst.)

Sure, the fact that Obi-Wan suffers through the death of his master and his girlfriend and is eventually killed by his own padawan is the devastating stuff of fiction that keeps me up at night. But in terms of Satine’s personal storyline, this ending is gut-wrenching: it is both ironic and fitting that Satine, an avowed pacifist, dies in such a violent manner. Even more devastating, the successful return of the “true warrior faith” of Mandalore points not just to Satine’s physical death, but to the death of her peaceful credo as well.

By verbally sparring with Obi-Wan throughout The Clone Wars, Satine demonstrates that the Jedi Order of the prequel era is doomed to fall as well. Indeed, Anakin Skywalker’s own fall from grace (which is, of course, the whole point of the first two trilogies) ties into her plotline as well. Satine’s relationship with Obi-Wan is heartbreaking because the Jedi Code forbids such “attachments.” Meanwhile, the fact that Anakin and Padmé had to keep their love a secret precipitates Anakin’s fall to the dark side and the rise of the Empire, so, that’s definitely something that needs to be dealt with–perhaps in the new Jedi Order?

Which brings us to the latest Star Wars saga, beginning with The Force Awakens. Satine Kryze is the linchpin that binds the Rey Kenobi theory, because the theory begins with Obi-Wan Kenobi having a canon love interest, which The Clone Wars very conveniently gives to us. (The fact that Obi-Wan says he “would have left the Jedi Order” for her should tell you all you need to know about how deep their connection was.)

There is also a curious link between Satine and Sabine Wren, the Mandalorian teen on Star Wars Rebels: Sabine now wields the Darksaber, the very weapon used by Maul to kill Satine, and Anna Graves (voice of Satine) voiced a ghost version of Sabine in a recent episode of Rebels. Also, come on, their names. With a whole galaxy of phonemes at their disposal, Dave Filoni and Co. settle on two words that sound so similar? Why?

(Though we’ve technically already met Sabine’s “mother” on Rebels, I maintain that if Sabine were the secret love child of Satine and Obi-Wan, it would obviously have to be, duh, a secret.)

A #ReyKenobi confirmation would flesh out a lot of narratively satisfying themes, especially the idea that love/marriage/procreation is not something to be avoided, as the Jedi Code purported. Indeed, if Anakin Skywalker’s “illegal” progeny end up saving the galaxy from the Empire, perhaps Obi-Wan’s “illegal” progeny could do the same from the First Order. And the title of Episode VIII, The Last Jedi, seems to indicate an end to the Jedi Order as we knew it, and, one would hope, the rise of something more open-minded.

Regardless of whether or not Duchess Satine Kryze connects to later Star Wars sagas in this more palpable way, it’s clear that her influence has had a profound impact on the galaxy far, far away, particularly when it comes to Jedi Master Obi-Wan Kenobi. (According to John Jackson Miller’s post-Revenge of the Sith EU novel “Kenobi,” Obi-Wan took on the name Ben because it was a nickname Satine used to call him. If you need me, by the way, I’ll be gross-sobbing in the corner.)

Satine was a pacifist on a world and in a universe literally defined by war, and her idealistic strength is something to be commended. She is a reminder that defending one’s values is often a mark of the highest honor, even if it goes against the grain. And that’s something both sides of a conflict can appreciate.

(images via Disney/Lucasfilm, unless otherwise noted)