“I Don’t Care About Rules”: The Clone Wars and the Feminist Redemption of Padme Amidala 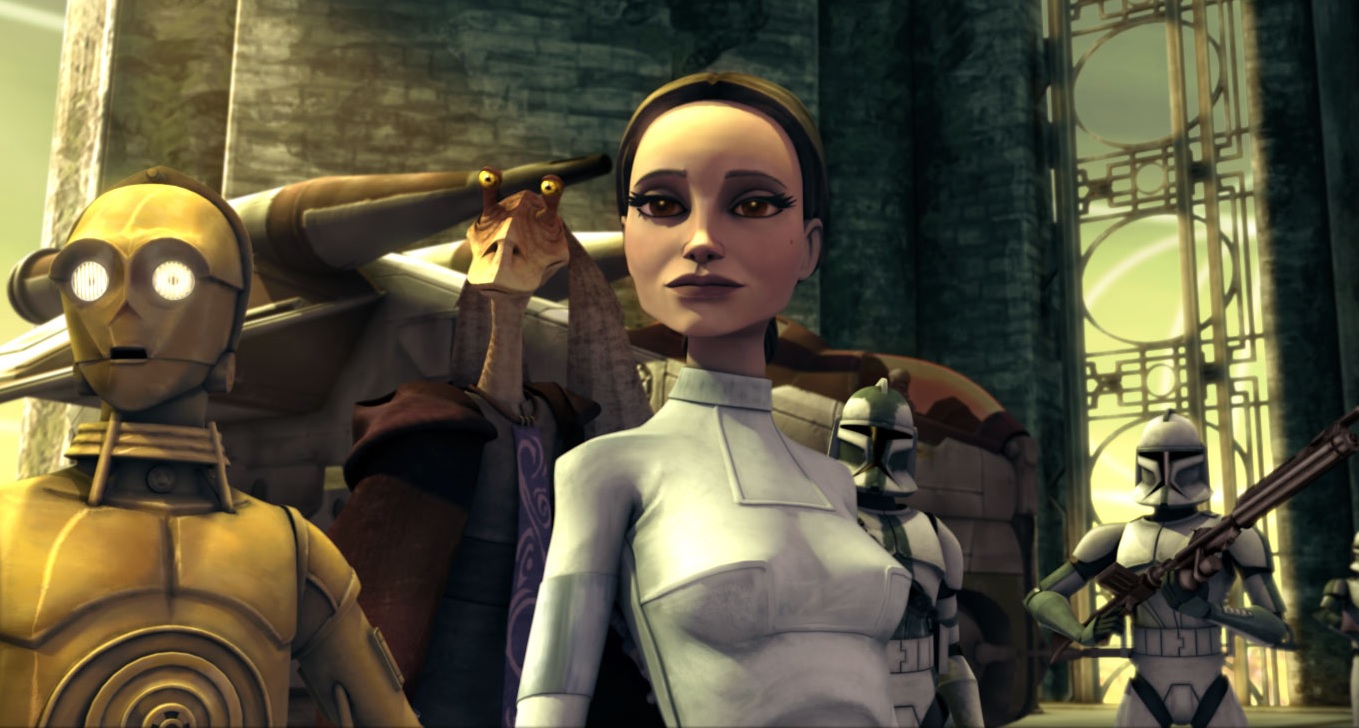 Before The Force Awakens, pickings were slim when it came to Star Wars heroines. If you were, say, a 9-year-old girl, and you wanted to dress up as a female character from the franchise, you had two main options: Princess Leia Organa, or Queen-turned-Senator Padmé Amidala. (Yes, I’ve done both.)

You can’t really go wrong with Leia, heroic leader of the Rebel Alliance, a quick-witted, sharp-shooting warrior, a princess with great hair who strangles the damsel-in-distress trope with her own two hands (hey, they don’t call her “Huttslayer” for nothin’). She’s got sass, she’s got smarts, and she takes charge when the boys drop the ball. (“Somebody has to save our skins!”) The Princess Leia of the original trilogy was a Strong Female Character before the term became a token, but she was also, importantly, multifaceted—she was a total badass, yes, but she was also vulnerable, caring and kind.

Leia was—and still is—a feminist icon. So when the time came to flesh out her ancestry in the prequel trilogy, those of us who idolized Princess Leia had high hopes for her birth mother, Padmé Amidala.

And then Revenge of the Sith happened.

Padmé, portrayed by Natalie Portman in the prequels, is first introduced as the young queen of Naboo, and she seems to possess many of the traits that her future daughter embodies: a groundedness despite her royal title, influential leadership abilities, a propensity for verbal zingers, and fabulous hairdos. But Revenge of the Sith essentially reduced Padmé to a Sexy Lamp. (For the record: Except for the Padmé problem, I am a huge fan of Revenge of the Sith. Yuuuuuuge.) Gone was the sharp-tongued senator who strove tirelessly to sustain democratic ideals; gone was the confident young woman who wasn’t afraid to take any Jedi or politician to task; gone was the blaster-wielding warrior who escaped from her chains in Attack of the Clones while Obi-Wan Kenobi and Anakin Skywalker (bless them) were busy bickering. Instead, Padmé spends her time wearing laughably lavish nightclothes and pining for an angsty Anakin. Then she dies in childbirth because, although she is pronounced medically healthy, she has lost the will to live. Anakin betrays her and she literally dies of a broken heart. (Unless, of course, she didn’t.) Really?

But what if there was more to Padmé Amidala than her brutally mishandled final act? Enter: The animated Cartoon Network series The Clone Wars.

Created by Dave Filoni, Clone Wars fills in the gaps between 2002’s Attack of the Clones and Revenge of the Sith, charting the progress of the wars that divide the galaxy far, far away and lead to the rise of the Galactic Empire. It is also the story of the people (and other sentient lifeforms) who make up both sides of the war, spotlighting main figures Obi-Wan Kenobi and Anakin Skywalker while also fleshing out the lives of secondary characters like Bail Organa, Luminara Unduli and Boba Fett, and introducing new faces such as fan favorite (and my ultimate favorite Star Wars character) Ahsoka Tano, as well as Hondo Ohnaka and Satine Kryze. But no one character benefits from a deeper exploration of character than Padmé.

The Clone Wars takes the Padmé Amidala of Episodes I and II and injects her with refreshing doses of agency, wit and political idealism. As imagined by George Lucas himself and actualized by showrunner Filoni, Padmé (voiced by Catherine Taber) is a beacon of morality in the corrupt Senate, a defender of democracy amid the chaos of radicalization and fear, a moralist blessed with pragmatism, and a selfless advocate for the common people. In fact, she is just the kind of politician we in America wish we had on the docket. #ImWithHer, indeed.

Padmé’s politicking is her superpower, making her a stellar role model for little girls who get to see a strong-willed young woman making a galactic impact. Indeed, when Padmé is forced to step in and deliver a speech in place of the esteemed Senator Bail Organa (Princess Leia’s eventual adoptive father), we catch a glimpse of a young Mon Mothma gazing at her in admiration. Mon Mothma, of course, will go on to play a pivotal role in the Rebellion— and prove to be a personal idol of Rogue One’s Jyn Erso. Indeed, Senator Amidala presents an inspirational figure for young women within the Star Wars universe and beyond.

In the season three episode “Corruption,” Padmé teams up with another fascinating female politician, the Duchess Satine Kryze of Mandalore (voiced by Anna Graves), an avowed pacifist, to combat the efforts of insidious smugglers. They lament the greediness and selfishness of certain Galactic Senators while also expressing admiration for the goodness embodied and enacted by others. Padmé and Satine are not exactly political allies, but their devotion to public service allows them to find common ground—as the best leaders do.

In a later season three episode, appropriately titled “Heroes on Both Sides,” Padmé reaches out to another political opponent in the pursuit of peace. When Ahsoka assumes that all Separatists are “evil,” Padmé gently teaches her otherwise. “The Separatists used to be part of the Republic,” she points out. “I was close with many of the Senators who left.” Through Padmé, The Clone Wars traverses the thorny moral politics of war, preaching against prejudice and promoting the importance of keeping an open heart and an open mind.

Of course, Padmé’s power and influence earn her many enemies, making her a target of physical intimidation and assassination attempts. But unlike in Attack of the Clones, which begins and ends with Anakin and Obi-Wan protecting her from these dangers, the Senator Amidala of Clone Wars is stubbornly self-sufficient. Padmé is also handy with a blaster, holding her own in the occasional shootout, as your average sci-fi heroine is wont to do.

Padmé, like her future daughter, fights corruption in the political arena and in the trenches, but also opens herself up to love and companionship. Unfortunately, the Padmé/Anakin relationship of the original trilogy has enjoyed none of the fan appreciation of the Leia/Han Solo romance, the main reason being that their on-screen chemistry is all but nonexistent, mostly because George Lucas’s dialogue leaves much to be desired. (Lucas is an unparalleled world builder and a storytelling genius, but he has famously struggled with script-writing.) In The Clone Wars, however, their relationship is given a chance to breathe, and their interactions are actually…kind of adorable. They bicker, they worry, they snark, they find comfort in each other’s embrace; in short, their domestic life is imbued with a healthy dose of normalcy. Well, normal for a secret marriage in a time of intergalactic war, but whatever.

Of course, Padmé also unleashes a fair amount of sass at Anakin’s expense, as befits her reaction to him in Attack of the Clones and gives me endless joy. In “Heroes on Both Sides,” Padmé takes on Anakin’s padawan, Ahsoka, for a mission only after Anakin royally screws up by mansplaining the war. “War is complicated, Ahsoka,” he says. “But let me simplify it. The Separatists believe the Republic is corrupt, but they’re wrong. And we have to restore order.” As Obi-Wan might say, only a Sith deals in absolutes. Which is why Padmé becomes so keen to teach Ahsoka about the finer complexities of conflict over the next few episodes.

In an earlier episode, “Senate Spy,” Anakin attempts to convince Padmé not to embark on a mission he deems “too dangerous,” only to inadvertently push her towards accepting the mission instead. “I’m not going to let you do it,” he says firmly. To the show’s credit (thank you, episode writer Melinda Hsu Taylor!), Padmé doesn’t view this as a sweet declaration of Anakin’s protective instincts, but as the chauvinistic crap it really is. “You’re not going to let me?” she sputters. “It’s not your decision to make—it’s mine.” Get it, girl!

All this from a children’s show, one that did more to advance the status of women in the Star Wars universe than the the first two trilogies combined. As a recent video essay by Vulture revealed, there is a shocking dearth of speaking parts in the original series for any female character not named Leia, and the same can said about the prequels for anyone not named Padmé. But as Lor San Tekka says in the very first line of The Force Awakens: “This will begin to make things right.” Indeed it does, introducing the likes of Rey (Daisy Ridley), Captain Phasma (Gwendoline Christie) and Maz Kanata (Lupita Nyong’o). Yet Dave Filoni and his Clone Wars crew were making things right years before The Force Awakens hit theaters, crafting original female characters such as Ahsoka, Asajj Ventress and Satine, and breathing new life into the character of Padmé Amidala. After all, if Anakin Skywalker can be redeemed, it’s only fair that Padmé is too.