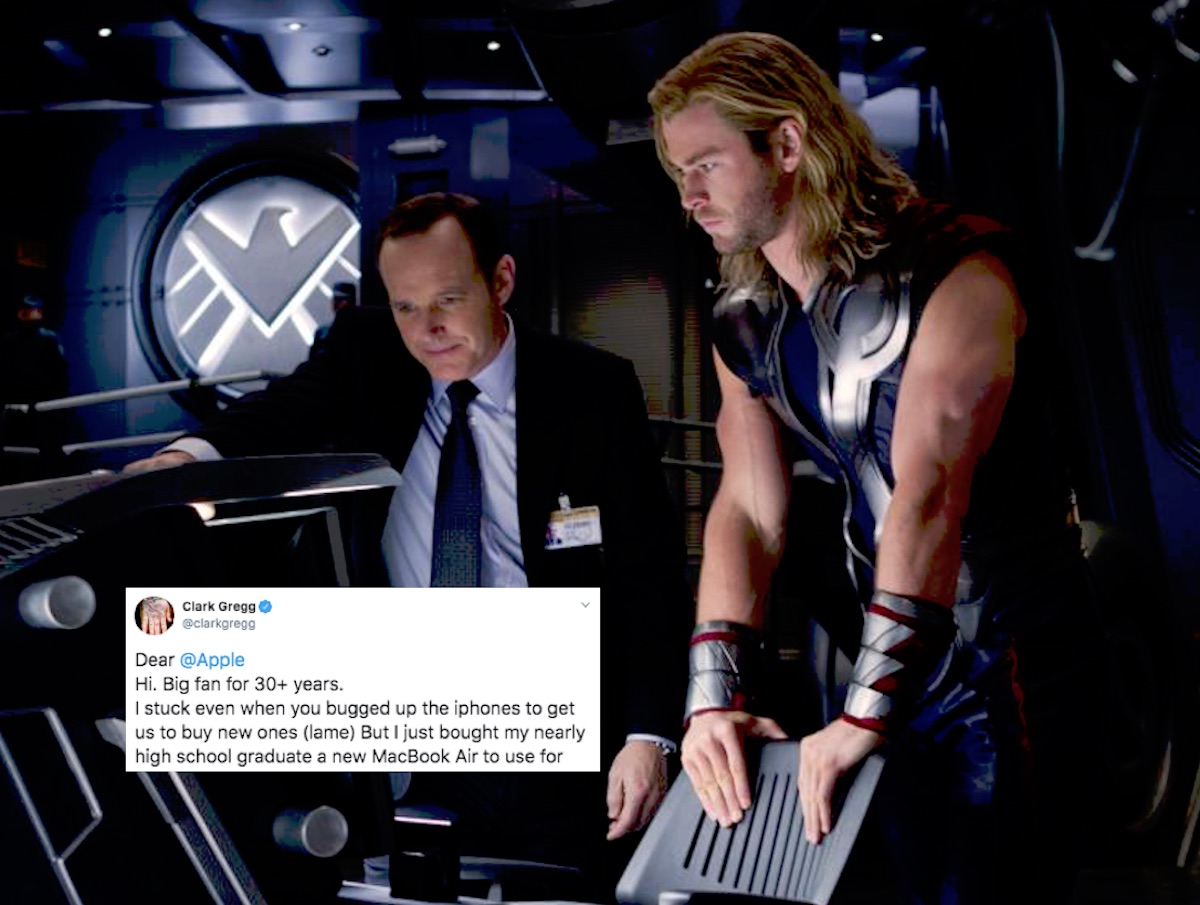 Actor Clark Gregg, also known as the MCU’s Agent Phil Coulson, tweeted out a rather searing indictment of the new MacBook Air that speaks to a common frustration where Apple’s pricey computers are concerned.

Gregg directed his tweeting ire at Apple because a brand-new MacBook Air he’d purchased for his soon-to-be-graduating-high-school kid came with what he termed an “awful” webcam. When you consider the price point, everything should be top of the line and up to date. The 2020 MacBook Air starts at $999 with 256GB storage, but even the $1299 512GB Air doesn’t come with an upgraded camera from the $999 model. The 720p cameras that these computers sport are decade-old tech at this point.

Dear @Apple
Hi. Big fan for 30+ years.
I stuck even when you bugged up the iphones to get us to buy new ones (lame) But I just bought my nearly high school graduate a new MacBook Air to use for what will probably be zoom university in the fall and the web cam is awful. Why?

Mere months ago, webcams wouldn’t have been such a huge concern, although it’s not wrong to expect a pretty snazzy webcam when you’re shelling out enough money to purchase a used car on a new computer. These days, however, webcams are more important than ever before—video conferences are how we do work and socialize, and Gregg’s kid is headed to what he terms “Zoom university” in the fall. If everything from attending classes, giving presentations, and making new friends will revolve around a webcam, finding a subpar one on a brand-new, super-expensive computer is definitely frustrating.

As for Apple’s new MacBook Pro, well, those range from $1299-$1799 for the 13-inch and $2399-2799 for the 16-inch. At those prices its webcam better come packaged with an award-winning Hollywood cinematographer who frames me in soft lighting every time I open up FaceTime. Alas, this isn’t so. As CNET points out, both the new Airs and Pros have “left us with the 720p FaceTime HD camera, which is a 1.2-megapixel webcam (with 1,280×720-pixel resolution) that badly lags behind the front-facing cameras on our smartphones.” They note that it’s “disappointing that Apple chose to leave its newest Mac with such outdated technology,” but it’s not exactly a shock.

BTW. This was my SECOND Mac. The PowerBook 100 Respect your customers @Apple or you will end up as outdated as this machine. pic.twitter.com/HIXoxg3eU5

Apple’s current line of computers are so far above my price range that I haven’t had the recourse to own a new model in quite some time. The truth is that I’ve often felt like I’ve dodged a bullet. Complaints have poured in about the newer MacBooks for years, especially their keyboards, which users bemoan for being nightmarishly bad. (When you start typing “Apple MacBook keyboard” into the search bar, it helpfully auto-suggests “not working” as the first result.)

While the new 2020 MacBooks are said to correct this issue (by abandoning the hated “butterfly keyboard” entirely), it took Apple five years to finally fix the keyboard problem. This despite knowing full well that the keyboards were faulty and prone to sticking and breaking, and hearing plenty of feedback on the matter. Five. Years.

As The Verge explained earlier in May with the 13-inch MacBook Pro announcement:

“After five years of applying bandages to the butterfly keyboard, Apple has switched over its entire laptop line to the scissor-switch-based Magic Keyboard in the span of six months.

Switching the entire product lineup over to a new keyboard in the span of six months is impressive, but the decision to finally do so came far too late. Apple obstinately stuck with this keyboard design for much too long, hurting its image and causing wholly unnecessary hassle and cost for its customers […] the whole butterfly keyboard saga has been a huge reputation hit for Apple.”

It’s hard to imagine many companies getting away with a wonky product in what’s supposed to be their specialty—design—for five years and still have customers willing to shell out so much money for the latest models. But customers have been willing to forgive Apple for quite a lot over the years; Gregg’s invocation of how Apple purposefully slowed down some old iPhone models is testament to that.

Not good when Agent Coulson calls you out.

YESSSSS!! finally somebody with some weight said it 😩…💥💥

The keyboard issue was a simmering problem that now appears mostly fixed by the switch to the “Magic Keyboard.” Yet Gregg’s Tweet highlights further dissatisfaction that not only Apple will have to take into account. Webcams, an often-overlooked area when buying a computer, are now vital technology, and their quality will be much more closely scrutinized.

Some replies in Gregg’s thread suggested that anyone looking for a peak-performing webcam fix for a new Apple MacBook can purchase an additional peripheral. You know, with all that extra money you have left after shelling out upwards of a thousand dollars on a laptop computer. And that’s if you can find one—good webcams have been selling like hotcakes (the $200 one linked below, which doesn’t even work with Airs, ships in 8-10 weeks).

in the meantime you are apparently welcome to purchase a $200 peripheral https://t.co/bBAAo6hWHz

While there’s long been an almost religious warfare online between fans of different systems, Gregg’s Tweet speaks to frustration from those who are staunch Apple supporters but have found it increasingly difficult to understand or justify the company’s decisions and their astronomical pricing.

Sorry, A reply from them will cost you $79.99 and you need to agree to the terms & conditions first