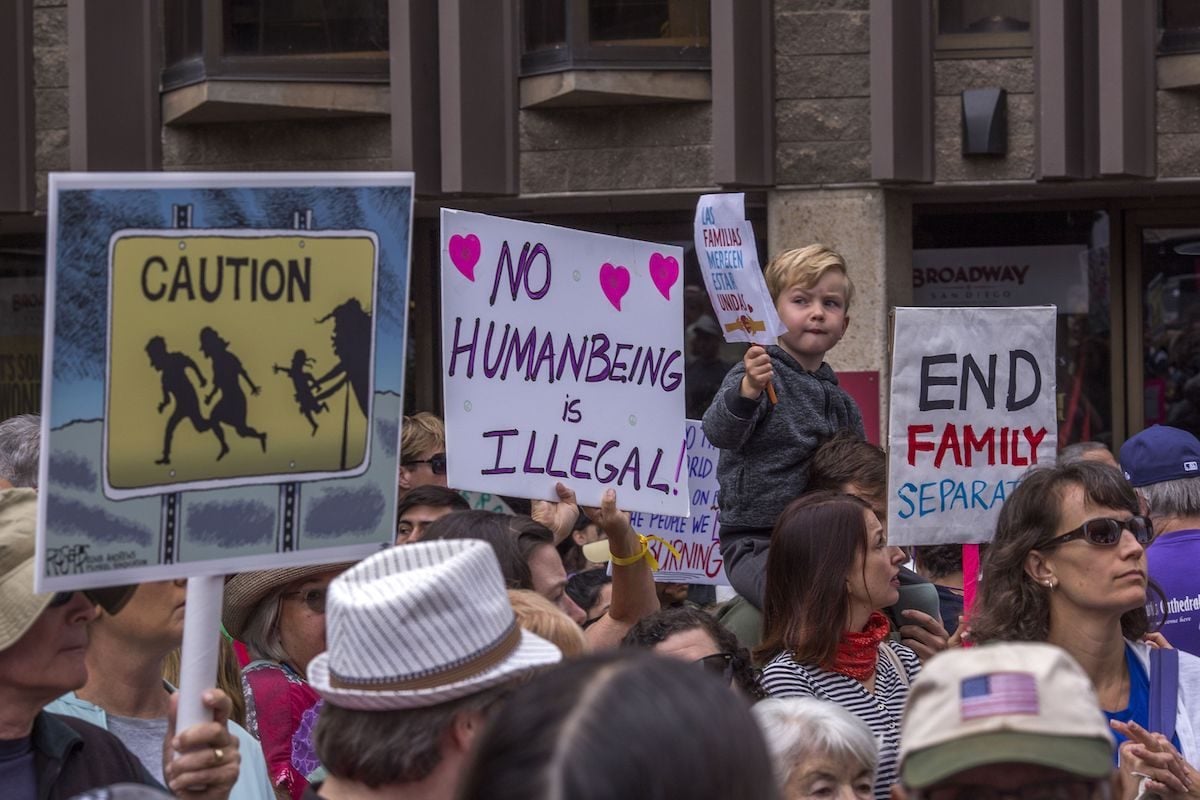 Amid the fallout from the Trump administration’s policy of separating migrant families at the border, indefinitely detaining asylum seekers, and locking children and babies in cages, Tuesday saw the Supreme Court rule in favor of a transparently anti-Muslim travel ban, and “crisis pregnancy centers” that manipulate and obstruct pregnant women’s access to basic health care. And these rulings—among a number of others that attack LGBTQ rights, labor rights, and voting rights—were enabled by the Senate’s confirmation of the first Trump-appointed Justice, Neil Gorsuch, through a seat stolen from President Obama.

For Americans who believe in the radical idea that families, regardless of where they’re from, shouldn’t be torn apart for political showmanship, for those who are appalled by the horrifying living standards migrant children are being subjected to, these are frustrating, frankly agonizing times. The injustice of it all is overwhelming, and so is the crushing feeling of helplessness that goes hand-in-hand with it. Sure, there is a lot all of us can do every day—call our representatives, sign petitions, donate what we can to progressive organizations, and of course, get out and vote—but at least for the moment, it’s largely out of our hands.

And that’s why it’s so devastating to watch those in power destroy all norms of basic decency and use their power to commit mass atrocities and inflict trauma on a generation of migrant children. All we really have at our disposal to fight with is our voice, our ability to stand up and say that the cruelty and bigotry perpetuated by each and every member of this administration, and its apologists, will not be tolerated by decent people. But amid the “civility” debates about whether Trump officials are still entitled to basic politeness, which have frustratingly seized and redirected attention from the mass humanitarian crisis created by this administration, pundits and right-wing politicians are constructing a false equivalence, and it’s one that is all too familiar to people of color, women, and every other group that is routinely vilified for having the audacity to raise their voice in the face of oppression.

There is a long history of turning a blind eye to the real, everyday oppression marginalized people face in public spaces regularly, and falsely equating these experiences to the social repercussions people face for holding oppressive political stances and actions. Being chastised for vigorously protesting the often life-threatening injustices they face is something marginalized people are all too familiar with in the world of respectability politics, where only “nonthreatening,” “agreeable” people of color, or other marginalized people, are listened to and respected. And even when they are “nonthreatening” and “agreeable”—can you recall a time when President Obama so much as raised his voice?—they often face the same intolerance nonetheless, because the “civility” argument is a convenient excuse to cover up a dismissal that would have happened whether the person in question remained “civil” or not.

In other words, this isn’t about civility—it’s about who is allowed to be angry in this country, and whose dignity and comfort are regarded as worthy of defending.

And the president plays an active role in this vilification. Just last week, he hosted “permanently separated” families, who lost loved ones to violence from immigrants, all while ignoring the families across the country who have lost loved ones to mass shootings or racist policing. His rhetoric and policies feed off of each other in their vile racism, and subsequently normalize the identity-based violence and harassment that marginalized people face every day.

The past couple weeks have seen Trump officials publicly, loudly shamed: Kirstjen Nielson heckled out of a Mexican restaurant, protesters blasting audio of crying migrant babies outside Nielson’s home, press secretary Sarah Huckabee Sanders denied service at a restaurant in Virginia, and Stephen Miller called a fascist at another Mexican restaurant. Their supporters, sympathizers, and even a good amount of centrists have been quick to defend them and construct a frankly insulting narrative, essentially equating their experiences to the discrimination routinely faced by people of color and LGBTQ people, but let’s get one thing straight: There is no comparison whatsoever.

Members of marginalized groups face harassment, discrimination, and even violence just for who they are. Hate crimes have spiked. It’s legal to discriminate against LGBTQ people in most states. Every day, trans people struggle to use public restrooms in peace. 99 percent of women have reported experiencing harassment in their daily lives, just trying to walk from one place to another. They face all this not for locking up innocent children, but because of who they are—and without a word of support from the self-proclaimed right-wing anti-discrimination police.

Trump officials are facing social ostracism as a consequence of the decision they make each and every day to advance a violently intolerant administration, whose cruelty, abuse, and vindictiveness are causing irreparable harm to some of the world’s most vulnerable people. These vulnerable people are namely migrant families fleeing rape, domestic violence, gang violence, torture, and other human rights atrocities—only to be torn apart, of course—let alone vulnerable groups hurt by this administration.

The same people who were either silent on or encouraged birtherism, who have nothing to say about all the many documented cases of Trump inciting violence among his supporters, have no right to call for “civility” from the Americans who are brave enough to use their voices to call out the architects of these shamefully, radically uncivil policies. And yet, the members of this administration have the audacity, the self-assuredness that this is their country and theirs alone, to feel entitled to politeness and blind submission and to face no consequences whatsoever for their actions.

There is no justification for the trauma that is being inflicted on babies and children whose families are risking it all for their survival, all while too many barriers have rendered our often discriminatory immigration/asylum procedures inaccessible to many non-white, non-English speakers. What’s happening is shameful, and so is the silence that the right is asking of us.

A Washington Post op-ed from this weekend is a particular, striking example of just how out-of-touch those who sympathize with this administration are.

“Those who are insisting that we are in a special moment justifying incivility should think for a moment how many Americans might find their own special moment. How hard is it to imagine, for example, people who strongly believe that abortion is murder deciding that judges or other officials who protect abortion rights should not be able to live peaceably with their families?” the editorial board writes.

The editorial board seems to paint “pro-life” activists as taking a peaceful, respectful approach, all while ignoring the long history of doctors being killed for offering the service; the enormous uptick in threats, violence, and arson directed at clinics since 2015; and the everyday heckling, harassment, and accusations of murder directed at women and doctors who so much as enter women’s health clinics.

In November 2015, a man claiming to be a “warrior for the babies” shot and killed three in a Planned Parenthood clinic in Colorado. This week, a story about a woman suffering a miscarriage being denied doctor-prescribed abortion medication has gone viral for reflecting how individuals’ personal beliefs are being used to justify the persecution of women. An Arizona woman was discriminated against and publicly humiliated not even for having an abortion, but a miscarriage, and not for her beliefs or choices or actions, but simply for being a woman who needed a health care service.

The civility police have yet to utter a word about her experiences, just as they’ve been silent on Donald Trump implicitly threatening Rep. Maxine Waters with violence, as well as the cruel, inhumane policy of family separation that started it all. What they have vocally condemned, on the other hand, is Waters’ encouragement of those who oppose Trump’s rabidly uncivil policies to walk up to his cabinet members and express their feelings in protest.

Social repercussions are the barest of minimums in terms of what Trump officials should be facing for how they’re treating people, and anyone who shifts the conversation from the cruelty of this administration to the purported cruelty of those who protest it, all while selectively ignoring the harassment and everyday, unrelenting social warfare on all marginalized groups, are sending a clear message about who they think belongs in this country and who doesn’t. They remind us who is allowed—and who isn’t—to be angry in America.