This Captain America: Civil War Mash-Up of Spider-Man and Deadpool is the Perfect Precursor to the Weekend

Thanks to 20th Century Fox owning the rights to Deadpool and Sony having control over Spider-Man, it’s not likely that we’ll ever see these wise cracking heroes in red together in an official capacity on the big screen (unless both sides start using the “sharing is caring” principle). That hasn’t stopped one crafty YouTuber from fulfilling our dreams with a perfectly cut mashup of the comic book duo in the same universe.

As Moviefone put it, Zach Ace has uploaded a 44-second video that answers the question, “What if Deadpool appeared Captain America: Civil War?” The short snippet isn’t very substantial, but it’s enough to whet the appetites of those dying for a real on-screen team-up. The reality of that is much more complicated because, aside from the rights debacle, there’s the question of vulgarity. One is family-friendly and the other is….friendly?

Even so, this little Friday treat is the perfect segue to the weekend. It even has the Merc with a Mouth himself, Ryan Reynolds, giving a shout out: 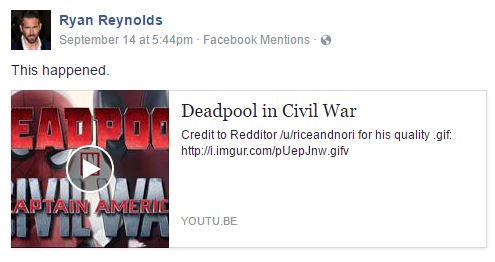 (via Moviefone, image via screencap)