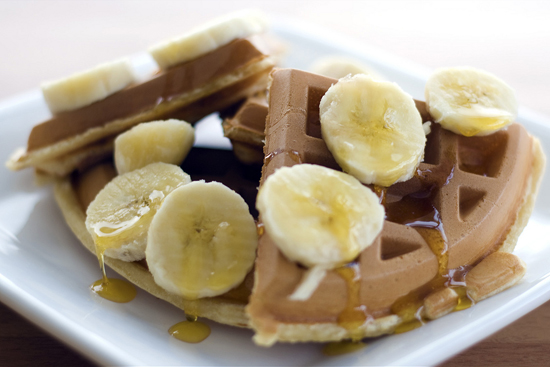 Anyone that’s ever loved fresh-basked cinnamon rolls has likely considered what it would be like to make a variety of baked goods exactly like it. With the sticky sweetness and cinnamon deliciousness, cinnamon rolls are greater than the the sum of their parts. But now there’s perfectly legitimate evidence that cinnamon rolls actually can be made into anything else. With some precautions, you can use canned cinnamon rolls to make cinnamon roll waffles.

And that’s just what the culinary entertainment blog Lady Behind the Curtain has done. If you have a sectioned waffle iron like presented on the blog, a single roll fits neatly in the middle of each spot. You might have to smash the roll down and lock the iron in place but it’s a small price to pay for four delicious cinnamon roll waffles.

“But,” you say, “part of the delicious package is the cream cheese icing.” Never fear! With a little corn syrup and water, the cream cheese icing you desire becomes a legitimate substitute for the traditional maple syrup of other lesser waffles. Other than these few differences, it’s basically your typical waffle-making method.

It’s worth noting that these are likely much worse for you than your usual waffle to boot. It’s the equivalent of consuming however many cinnamon rolls combined with the icing. Not that anyone should let that stop them. For science.

(Lady Behind the Curtain via Lifehacker, image credit via Darren Tunnicliff)