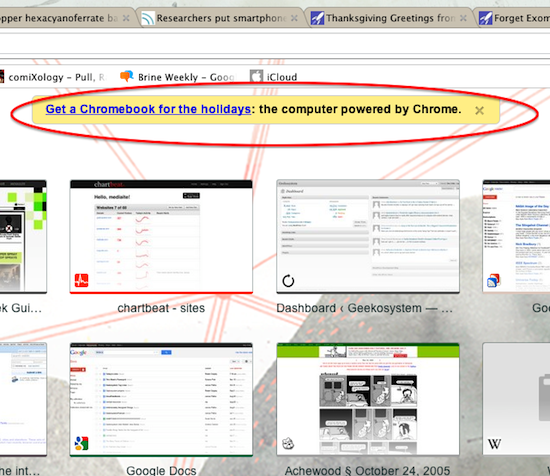 It’s Black Friday, formally the worst day for retailers during the year, so it’s not too surprising to see ads popping up in unusual places. I was, however, taken aback when I opened a new tab in Chrome and found that Google was using my homepage as an opportunity to try and sell me a Google Chromebook.

Apparently, the advertising effort is not affecting all Chrome users — we at Geekosystem were unable to reproduce the ads on a different computer using the exact same version of the browser. This might be an effort on Google’s part to keep user backlash to the ads low; and it might be working since there are few complaints floating around the net after the ads have been running for at least a few days. Moreover, the ads also disappear after a few seconds if the user doesn’t click on them.

If the user does click, they’re whisked away to a purchase screen for the Chromebooks, which use an ultralight Google-made OS and are primarily cloud-based devices. Using a suite of integrated Google tools, like Docs and GMail, their aim is to take computing off the computer and put it on the Cloud. Google has also recently dropped the price of their Chromebooks in recent weeks.

While Google has advertised inside Chrome before, they have been for games and other Chrome-based services. To be honest, I am not a fan of being a captive audience to advertising, and it irks me that this an ad for something outside of Chrome within my homepage. It’s like opening Apple’s Mail app and triggering an ad for an iPod. True, Chrome is free to use so it would be unfair to claim that I don’t deserve to see ads, but even this subtle ad feels like an invasion of my personal space.

Hopefully if Google decides to continue using Chrome as an advertising platform, they’ll keep it low-key like this. I suppose it could be a lot worse.