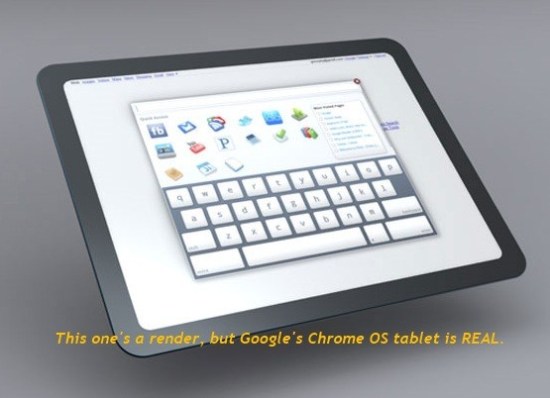 Download Squad is reporting that Verizon and Google have teamed up once again. But this time, instead of fiddling around with the tubes, they’re planning to release a tablet running Google’s Chrome OS this November. Specs on the device are purely speculative at this point, but include a 1280×720 multitouch display, 32 GB of Flash storage, GPS, Wi-Fi, Bluetooth, and a 3G data connection (this is Verizon we’re talking about, after all). The hardware will reportedly be built by HTC, in the same manner as the Nexus One.

As for the launch date of November 26th, well, that’s all kinds of brilliant. It’s Black Friday 2010 and the busiest shopping day of the year in the U.S. — so what better day to have a shiny new tablet in the cabinet at Verizon kiosks and stores all over the country? You can bet Google’s Chrome OS tablet will be heavily subsidized, and I’d go so far as to say it will be substantially cheaper than the iPad — if not totally free — with a Verizon data contract.

Totally free? Somehow I doubt that’s going to turn out to be true. A tablet with that much Flash memory and such a large screen will certainly more expensive to produce than those LG flip phones Verizon used to give away with new contracts. It may end up being cheaper than the iPad, but I’d be very surprised if it was free.

(story via Techmeme, pic via DownloadSquad.)