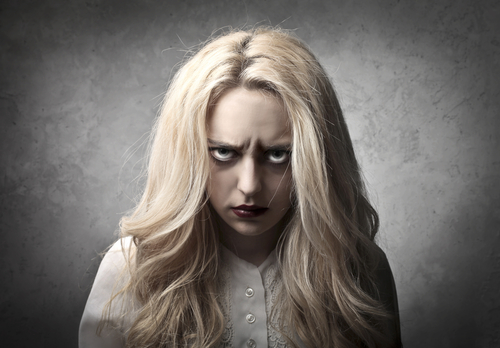 I never read much YA. I went straight from Scary Stories to Tell in the Dark to Stephen King’s It. But I did spend a few years—fifth and sixth grade, maybe seventh too—reading every Christopher Pike book I could find. And then came eighth grade, and I forgot all about him. As any horror fan knows, though, the past always returns, especially when your mom wants to get all your old stuff out of her house.

So there I was, two decades after first reading it, staring at Whisper of Death’s bright red title, pink sky, and hitchhiking grim reaper. A goofy cover that nevertheless evoked a cold dread. I remembered an eerie desert setting, and disturbing stories-within-stories. I was sure the book was the most frightening of the bunch, and therefore the best. 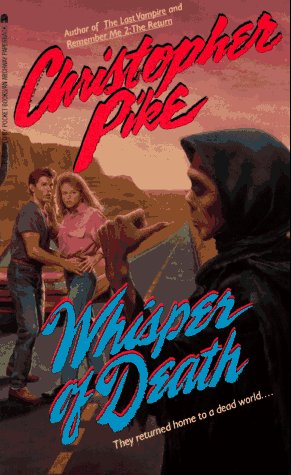 The novel begins with Roxanne and Pepper, two teenagers who went and got pregnant the first time they had sex (shades of health-class horror) and are now en route to an abortion. At the clinic, Rox changes her mind and flees the exam room before the doctor appears. She and Pepper drive home, where they find their small town deserted save for a few classmates: pretty Leslie, thuggish Helter, and class-clown Stan.

What do the five have in common? They all crossed paths with Betty Sue, another teenager who committed suicide not long before—and in a spectacular fashion, setting herself on fire at a gas station. The group discovers Betty Sue’s writings, a series of disturbing fables. Lati Ball is a vain party guest whose mask catches fire and fuses to her face, killing her. Holt walks along a ledge that grows ever more narrow until it’s just a blade; he slips, and is sliced vertically in half. Soda Radar, a court jester, is stabbed to death by Queen Beetle.

One by one, the stories come true. Leslie dies in an explosion, Holt accidentally shoots himself in the groin, and Stan slits his wrist—all compelled, it seems, by Queen Beetle herself, the vengeful author Betty Sue. “Salt and Pepper,” the protagonists of her final story, don’t stand a chance.

The cover didn’t lie: Whisper of Death is no great literary achievement. But Betty Sue is still frightening. Her stories are spare and clunky, but all the more powerful for it, like a cheap child’s toy in an abandoned house. She herself lurks outside the frame, a figure with bright red hair, both victim—Helter raped her, Pepper slept with then scorned her—and cruel murderer. I worried the novel would be tame, and it’s not, but Betty Sue snuffed out my nostalgia all the same.

At the end, we learn that Rox actually did go through with the abortion; that Betty Sue, somehow, is the manifestation of her fetus (embryo?). Betty Sue murders Rox with a needle, a callback not just to illegal abortions but to Rox’s near miss with a pitchfork the night she and Pepper conceived in a barn. Rox hemorrhages during the abortion and dies. (Pepper, for what it’s worth, gets his too.) Whisper of Death is Anti-Woman Horror 101. Women who have sex must die, and their deaths must be gendered.

Of course, if you’re a feminist, you’re familiar with this kind of betrayal. Art and entertainment conflict with our feminism far more often than not. If we were to eschew misogynist books, movies, music, and television, we would have very little art in our lives at all. I’m no purist. I mean, I’ve watched eleven seasons of Supernatural, so obviously I know how to compromise.

But Whisper of Death is different. It’s not the screeching anti-abortion, anti-sex message (and Pike was the sexy one, not like that juvenile R.L. Stine!), but that I had absolutely no memory of it. I imagine my eleven- or twelve-year-old self, captivated as Betty Sue explains that all the violence and suffering is Rox’s fault. Rox’s death must have felt, in some sense, right, or I wouldn’t have remembered the book as one of Pike’s best. The deserted town and lethal fairy tales stayed with me. The shamed girl settled somewhere below, in my subconscious.

That scares me more than Betty Sue.

Abortion is difficult to discuss. Rox shared my point of view—that those who are for it, and those who are against it, are both right and both wrong. I do support a woman’s right to chose. [sic] But many people have written and asked if I cursed Rox to suffer at the hands of Betty Sue because Rox chose to have an abortion. Yet, at the last minute, Rox decided to keep the baby, although maybe she was too late—another conundrum. The book is full of them.

He goes on to talk about the Divine, and Essence, and evil souls. He says that Betty Sue’s stories “disturbed” him and he was grateful when the book was finished.

Facebook comments rarely persuade me, and a post by a New Age guy about how we’re all a little right and a little wrong is no exception. When Pike implies he channeled something evil, it’s such obvious self-mythologizing. And yet! Betty Sue, for all of her retro politics and nonsensical origin story, is pretty damn scary. Maybe she’s scary because of her retro politics and nonsensical origin.

I doubt I’ll pick up Whisper of Death again, but there 23 more books in that box, which currently sits under my writing desk (no metaphor intended). I admit it: I’m curious about the stories they hold. But I’m also content, for now, to spend a few minutes staring at those silly covers and wondering what those terrified teenagers—characters, readers—might conceal.

Stephanie Feldman is the author of The Angel of Losses, a Barnes & Noble Discover Great New Writers Selection, winner of the Crawford Fantasy Award, and finalist for the Mythopoeic Fantasy Award. She teaches fiction writing at Arcadia University, and lives outside Philadelphia with her family. You can find her on Twitter as @sbfeldman.