The “Christmas Tinner” Canned Meal Looks Too Ridiculous to Be True, Because It’s Probably Not

This is just a weird British gamer joke, right? 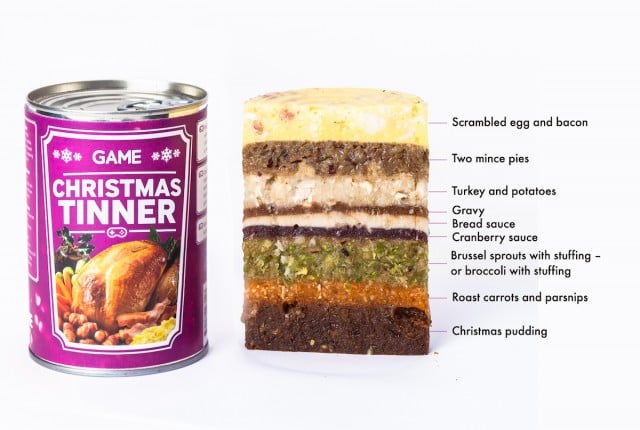 This image of a canned Christmas meal marketing to gamers has been making its way around the Internet and into a lot of news stories about how ridiculous it is. If it’s too ridiculous to be true, it usually is. We’re taking Occam’s razor to this story and saying we don’t buy it.

Here’s the setup for the story we’ve seen: It’s Christmas morning. You’ve unpacked a load of new games and are pumped to keep playing. Then dinner time rolls around. What are you going to do? Pause and go talk to your family? OF COURSE NOT! You’re going to do the only logical thing — stuff your face full of nine layers of canned Christmas. At least that’s what U.K. company GAME thinks.

Telegraph has a quote from the creator of the tinner, Chris Godfrey. He’s a graphic design student, and not a canned-dinner technician, another indicator that this is bogus. We looked him up and found his website, chrisgodfrey.me, where has a similarly canned 12-course meal.

We’re calling hoax on this one, folks. If we’re wrong we’ll eat our words, and this gross-looking can of food.

(via Telegraph, image via GAME — allegedly)