It Really Is a Wonderful Life: Christmas-Themed Stories to Fight the Good Fight By 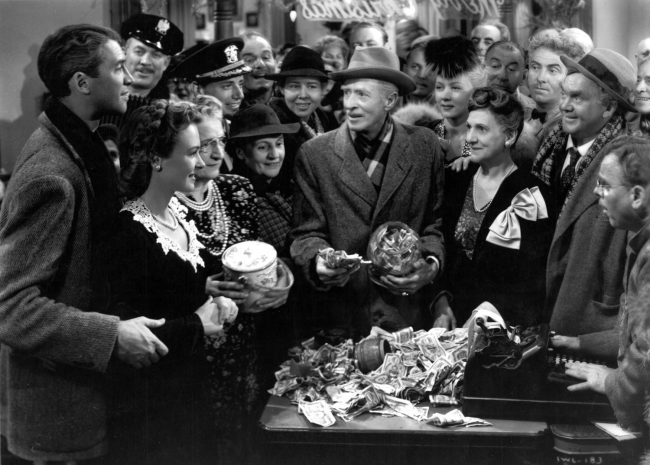 It’s a Wonderful Life is one of my favorite movies. So much so, that I’ve been known to watch it in the summertime. It is, however, absolutely essential that I watch it during the holiday season. I popped it in a few nights ago when I was wrapping gifts, and it struck me as I watched that…Mr. Potter sounds an awful lot like a lot of people with whom I argued on Facebook this year.

With this in mind, I thought about it, and (believe it or not) there’s also a holiday episode of The Twilight Zone that seemed particularly relevant this holiday season, considering the administration we have to look forward to next year.

So, here are two Christmas-themed stories that’ll get you pumped to join forces with your fellow humans against encroaching tyranny and greed.

It struck me this year how generally dark this movie is. After all, the entire plot revolves around preventing a suicide, and we get to see the dark effects of that on a family. There’s also some blink-or-you’ll-miss-it homophobia when George and Clarence go to Nick’s (formerly Martini’s) to get a drink, and Clarence’s talk of angels and taste in cocktails prompts Nick to respond with “We don’t need any ‘characters’ around here to give the joint ‘atmosphere,'” followed by “Out you two pixies go! Through the door, or out the window!” Oh, and there’s a racist/sexist combo as George’s younger brother, Harry, sexually harasses their black housekeeper, Annie, slapping her on the behind as he chases her into the kitchen for some pies. Oh, late-1940s America.

However, it’s also a surprisingly progressive film. The entire movie happens because, rather than go off to pursue his dreams, George Bailey stays in Bedford Falls for Mary, the love of his life. Now, this is hugely sad, as he kept missing his chance (and seriously, couldn’t Mary have lived somewhere else?), but it’s also not what one would expect from a story of its time: that a man would change the course of his life for his wife, not the other way around. He never expected her to follow him where his dreams led. She loved Bedford Falls, so that’s where they stayed.

Also on the female character front is Violet Bick, who from the time she’s a little girl is way into boys. But rather than slut-shame her, the film subverts the way the town sees her by having its protagonist always treat her with respect. George is never really into her, but he also never stops being her friend or being kind to her because of her “reputation.”

However, the biggest progressive thread in this film is woven through the main plot about the Bailey Building and Loan.

Mr. Potter is “the richest man in town,” and owns just about everything in it…except the Building and Loan, which is responsible for providing loans to working class people so that they can have housing. Potter tries several times, unsuccessfully, to destroy, buy out, or otherwise sabotage the B&L, but George’s father, and eventually George himself after his father’s passing, keep it afloat and remain Potter’s sole competitor.

In the clip above, we see George stand up to Potter after his father’s death, reminding the Board of Directors why keeping the B&L in tact is so important. In the first clip below, we see the a scene from the Great Depression, in which George reminds his customers that they are stronger when they use their money to help each other, rather than it being every person for themselves getting scraps from Potter’s table.

And the clip below that shows George’s moment of desperation, where he briefly forgets how much stronger he is in a group, and is about to become Potter’s lackey when he thinks better of it and tells Potter off.

In the end, when George is at his lowest, he is saved not by the hand of capitalism, but by his community coming together to help him the way he’s always helped them. As Clarence’s inscription in the copy of Tom Sawyer he gifts George said: “Remember, no man is a failure who has friends!”

It’s a Wonderful Life is, at its core, about the power of the people over an oppressive authority. Is it any wonder, then, that the FBI had the film on a list contained in a file called “Communist Infiltration of the Motion Picture Industry?” 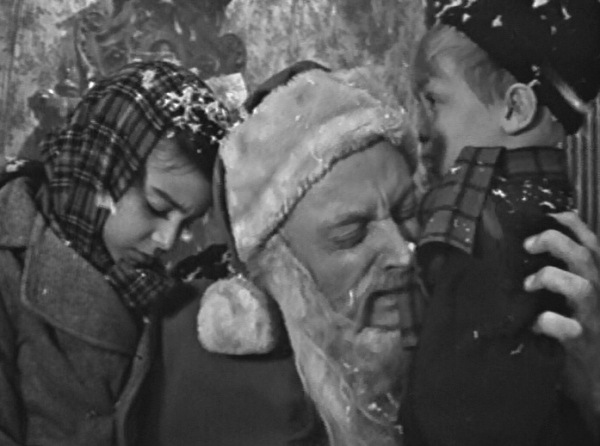 While marathoning The Twilight Zone on Netflix a couple of weeks ago, I came across “The Night of the Meek,” which was the 11th episode of the second season. It stars Art Carney (of The Honeymooners fame) as a down-on-his-luck alcoholic named Henry Corwin, who lives in a “dirty rooming house on a street filled with hungry kids and shabby people.” To help pay for that room and those bottles of booze, he’s currently working as a department store Santa.

However, when he is drunk on the job, he is fired for yelling at a young boy’s mother about the meaning of Christmas. He then delivers this speech, where he reveals his wish to be able to make Santa real, for just one Christmas, in order to bring joy to the poverty-stricken people of his neighborhood:

Eventually, he finds a large sack in an alley (after hearing bells jingling, naturally), and realizes that he can pull from it anything a person wants. So, he starts delivering gifts to the poor and the hopeless, finally becoming Santa Claus like he always wanted.

This story struck me, because so many Christmas stories talk about the poor, and how important charity is. The poor are props in someone else’s story of growth. But this story was told from the point of view of the poor. The poor who are forced to stand by and watch as people who are better off make Christmas about acquiring things rather than loving each other. We have a disheveled, disreputable protagonist who, nonetheless, gets to be the hero of the story.

Much like It’s a Wonderful Life, “The Night of the Meek” is about the people coming together in community and not being sucked into the capitalist rat race. In this story, one of their own can provide what they need, and they can exist outside the system and be happy.

So, if the holiday specials you’ve been watching have been a bit too schmaltzy, revisit It’s a Wonderful Life with your anti-capitalism hat on, and check out “The Night of the Meek” if you haven’t already. They’ll provide much-needed fuel for your activism fire.