Otherwise known as "this is why we can't have nice things, Internet". 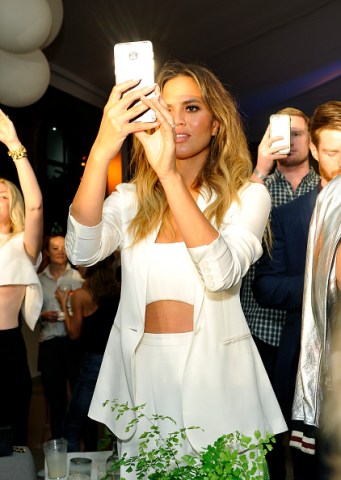 Earlier this week, model Chrissy Teigen and her husband, musician John Legend, announced that they were expecting their first child. According to Teigen, the road to parenthood hadn’t been an easy one. On her personal Instagram account, she shared that this had been one of many attempts to conceive, but that they were “excited that it’s finally happening” and she was “[looking] forward to all the belly touching”. Pretty adorable, right?

Well, unfortunately, the Internet can’t ever let a good thing just stay a good thing. A few hours ago, Teigen posted her first pregnancy selfie to her Instagram, but people quickly took to remarking on the size of her baby bump—to the point where some even insisted she must be having twins.

After fielding many uninvited comments—even deigning to acknowledge some of them directly—it was clear Teigen had had enough of the Internet’s opinion on her body:

No more preg tweeting for me, lesson learned!! Back to food and reality TV and hay things

Teigen hasn’t shied away from discussing her personal life via her various social media accounts—in fact, she’s refreshingly open and honest for someone who is under constant public scrutiny. She’s admitted to reading most of the comments she gets on Instagram and Twitter, and hasn’t been afraid to call out people who tweet hate for seemingly no reason at all. It’s disappointing that while this was supposed to be a moment of celebrating something awesome, it quickly soured thanks to people making comments that they really didn’t need to.

Women do not need our unsolicited opinions on their bodies. End of story.

(via Jezebel, image via Getty Images)