Chris Rock Refers to the Oscars as the “White BET Awards” 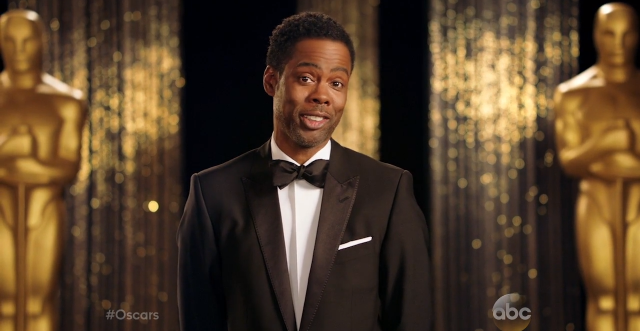 The 2016 Academy Award nominations were announced on Thursday, prompting a lot of needed and important criticism on the Internet. For the second year in a row, the four biggest acting categories were dominated by white actors. There were also a lot of unfortunate snubs among actors and films–Will Smith, Idris Elba and Creed actor Michael B. Jordan and writer-director Ryan Coogler were listed among some of the most surprising names left out from the nominations list.

It didn’t take long for the #OscarsSoWhite hashtag to begin trending again on social media. Editor April Reign originally created the hashtag last year after pointing out the disturbing statistical reality in the 2015 nominations–and noted that this year, the percentage of nominated actors/directors/writers/editors of color was even lower than it had been in 2015.

Some people also noted the interesting nature of the situation–actor Chris Rock will be hosting the ceremony, but it looks like he’s not going to waste any time in drawing attention to the issue with a little of his own humor. In a tweet posted yesterday attached to an Oscars promo, Rock joked that the 2016 Oscars could be referred to as the “white BET Awards”:

The #Oscars. The White BET Awards.https://t.co/8qjLR0uysI

The biggest issue cited among critics of the Academy is its makeup–you can see the disparity in the infographic below, with statistics being compiled all the way up until 2015. An overwhelming number of Academy members are white, with the average age of voters being 63 years old. 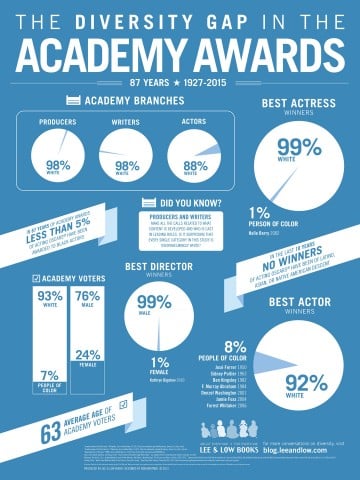 Last year, Academy president Cheryl Boone Isaacs said she didn’t think the Academy had a problem recognizing diversity. This year, she had a slightly different (if still conciliatory) response:

Of course I am disappointed, but this is not to take away the greatness (of the films nominated). This has been a great year in film, it really has across the board. You are never going to know what is going to appear on the sheet of paper until you see it.

It is important to remember that there were some good performances overall this year, and there are some pretty exciting nominations on the list worth recognizing (Margaret Sixel for Mad Max: Fury Road! Star Wars: The Force Awakens!). That being said, people are tired of waiting around for what almost feels like inevitable disappointment every year in terms of the lack of diversity across the Oscar categories. At least this year we can cross our fingers for Chris Rock to do some serious dragging of the Academy on February 28th.