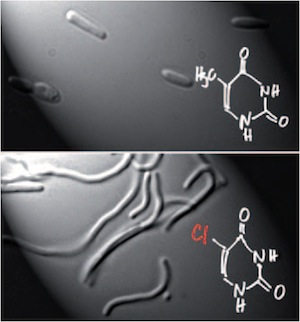 Last year, NASA scientists caused a whole lot of hullabaloo over the arsenic life study. Many people interpreted NASA’s first teasing press releases about the study to mean that they had discovered alien life. Far from it, NASA researchers published a study claiming to have found bacteria that could use arsenic to build their DNA. This would make the bacteria unlike any other known form of life on Earth.

While alien hunters were obviously disappointed, many in the science community were also left up in arms over the study. There was a subsequent media firestorm and backlash as scientists pushed back at the study for problems with the quality of the research. But just because arsenic life turned out to be hugely controversial, doesn’t mean that other good research isn’t being done in biochemistry. In fact, new research (that so far seems much less controversial) suggests that there is a form of E.coli that incorporates chlorine into its DNA.

In all living organisms, DNA is made up of the compounds adenine, cytosine, guanine, and thymine. Thymine is a ring of carbon and nitrogen atoms, with oxygen and hydrogens atoms that hang off the sides. Since the 1970s, scientists have been trying to swap in other molecules for thymine. Now, it seems that they may have been successful. A compound called 5-chlorouracil, has been incorporated into the DNA of E. coli, marking the first time DNA has been made that contains chlorine.

A team of scientists in Germany recently published a study which describes their work developing E. coli that live on chlorouracil alone. The researchers fed a population of E. coli chlorouracil, while supplementing their diet with small amounts of thymine to keep them from starving to death. The bacteria that developed mutations to allowed them to use the chlorouracil instead of the thymine were thus favored by natural selection. The researchers then lowered the thymine levels to increase the evolutionary pressure on the bacteria.

After five months of working with this evolution process, the researchers found big changes in the E. coli. The bacteria had started out in the normal capsule shapes, but they turned into more worm-like shapes, before going back to their capsule shape. The scientists also found that the bacteria were using the chlorouracil at a very high rate. The results showed that 90 percent of the thymine in their original DNA had been replaced by chlorouracil.

The researchers found that the bacteria were still incorporating some thymine into their DNA through a previously unknown pathway. The scientists blocked this pathway, and found that the bacteria still grew successfully with only 1.5% thymine in their DNA. This E. coli is pretty special, with over a thousand mutations that make it possible for it to use the chlorouracil. But if it is re-exposed to thymine and no chlorouracil, the researchers found it can switch back to its normal way of living.

The next phase of this research will see if the scientists can force the evolution of the bacteria even further so that they only live on chlorouracil, and starve on thymine. So what makes this study so much more believable than arsenic life? Well, using chlorine in DNA is a relatively small change compared to what would have needed to occur for arsenic to be swapped with phosphorus in the backbone of DNA. Using chlorine doesn’t make a big change to how the compound reacts with other compounds. It also doesn’t change its size significantly or its stability.

We’ll see whether this study stands up to scrutiny, but for now while it might not be aliens, or even as shocking as the idea of arsenic life, chlorine life seems to be a pretty exciting (and real!) development in biochemistry.