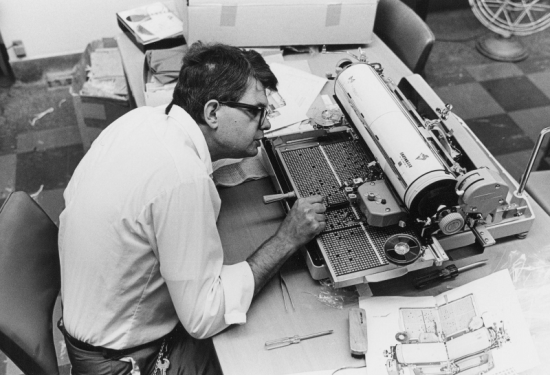 Typing in Chinese characters on a QWERTY keyboard takes a bit of getting used to, but it’s not that difficult, and it follows a pretty intuitive process: Basically, one types a transliterated version of the character needed following the pinyin phonetic system, and this pulls up a menu of possible characters sorted by frequency of use. For instance, one types in “zhong,” and all of the characters that are pronounced “zhong” are listed to choose from, with the most commonly used “zhong” characters occupying the first few slots on the list; one then types a number to quickly select the desired character. It sounds complicated, but it’s pretty quick in practice.

But what did people do before word processing software existed? Answer: They used typewriters. Very complicated typewriters. Not only did these have thousands of individual buttons to correspond to characters, but they required additional racks of buttons should a more obscure character be desired. Oh, and for good measure, they’re upside-down and backwards.

As you can see, the typewriter is extremely complicated and cumbersome. The main tray — which is like a typesetter’s font of lead type — has about two thousand of the most frequent characters. Two thousand characters are not nearly enough for literary and scholarly purposes, so there are also a number of supplementary trays from which less frequent characters may be retrieved when necessary. What is even more intimidating about a Chinese typewriter is that the characters as seen by the typist are backwards and upside down! Add to this challenging orientation the fact that the pieces of type are tiny and all of a single metallic shade, it becomes a maddening task to find the right character. But that is not all, since there is also the problem of the principle (or lack thereof) upon which the characters are ordered in the tray. By radical? By total stroke count? Both of these methods would result in numerous characters under the same heading. By rough frequency? By telegraph code? Unfortunately, nobody seems to have thought to use the easiest and most user-friendly method of arranging the characters according to their pronunciation.