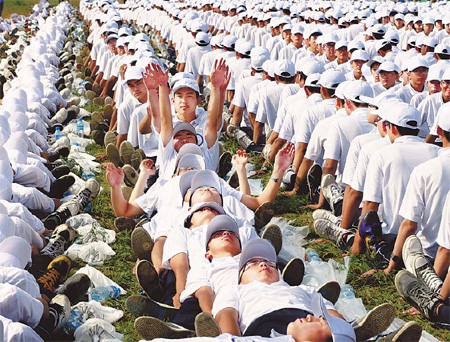 10,267 people, to be exact. In the city of Ordos, located in the Inner Mongolia autonomous region of China, the throng of people toppled over from seated positions, shattering the previous record held by 9,234 Singaporean students in 2000. It took them an hour to complete the entire domino chain.

What’s more, the group of human dominoes, divided into more than 50 groups, dressed in color-coordinated clothing that spelled the word Ordos in both Chinese and English. Even though they were bound to break the record, they made the effort to go the extra mile — impressive!

“This magnificent feat was very hard to achieve, but we were all confident we would rewrite history,” said Liu Manshan, head of the Dongsheng district culture bureau. Sure, it’s human bodies — not world-changing policy — that they put into motion, but hey, baby steps.