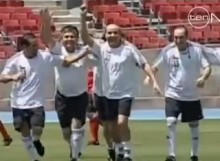 The team of rescuers that pulled 33 Chilean miners to safety from over 2,000 feet below the Earth’s surface acted with purpose, togetherness … and of course, compassion for the trapped workers. And yesterday, the rescuers used two of those three qualities to beat the miners in a friendly soccer match, 3-2, held in the Chilean capital of Santiago.

Making the rescuers’ victory more impressive is the fact that the team of miners included a former member of Chile’s national team, Frank Lobos. Sure, Lobos is 53 now, but hey, Chilean president Sebastian Pinera – who captained (and scored for) the victors – is 60.

>>>See the video at SportsGrid.